Tune in next week...

This week at the Grip, our topic, proposed by Jamie, is “Series or Stand Alone?” What do I have to say about that? I wondered as I sat down to write my post. It wasn't a question that I'd ever really considered.

As a reader, I often enjoy sequences of books set in the same world and perhaps featuring the same characters. One of my favorites is Anne Rice's Mayfair Witches saga. If you enjoy paranormal fiction, but you haven't read this, I recommend it highly. I think that it's far more original and engaging than the her Vampire Chronicles (although there are some characters from the Chronicles that also show up here, most notably the psychic researchers from the ancient order of the Talamasca). Over the course of the three delightfully fat volumes (The Witching Hour, Lasher, Taltos), Ms. Rice gradually reveals more about the source of Mayfair clan's powers and the nature of the mysterious Taltos race whose destiny is entwined with theirs. Meanwhile, she creates some fabulous female characters (the Vampire Chronicles is heavily male-oriented) and includes a not-insignificant amount of supernaturally-influenced sex.

Another series that I've enjoyed recently is Louisa Burton's Tales of the Hidden Grotto. Little by little, the (so far) three books in this series deepen the reader's understanding of the four immortal creatures that shelter in the enchanted French valley with its ancient oak groves, Roman baths, and medieval chateau, as well the mortals who are sworn to protect them.

The great thing about reading a series is that when you finish one book, you know that it's not really the end. If you're caught up with the characters, you can look forward to encountering them again. You get the satisfaction of closure, along with the anticipation of future conflicts and complexities.

Series in the world of erotica/erotic romance sell well. Clearly other readers feel the same way I do. Jamie and Jude have both penned multiple series, and I believe that Kim has just released the first story in a planned series of twelve, called "Perfect Timing". So why haven't I tried my hand at a series?

To write a successful series, I think that an author needs a vision that spans more than one book. She (sorry Garce! Just trying to avoid clumsiness) needs to have a sense of where the series will lead her, a whole sequence of conflict/resolution arcs rather than just one. So far, that sort of vision has eluded me. At the end of most of my books, I feel as though I know where my characters are. They've made their choices. They've reaped the consequences. For the moment, I'm content to let them be. I am, perhaps surprisingly, not all that curious about what will happen to them next.

I've considered, off and on, writing a sequel to Raw Silk. I've got a chapter or two sitting on my hard drive. I just haven't been able to motivate myself to continue. I'm tempted to write another book featuring Stella Xanathakeos, the protagonist of Exposure. She's such a kick ass gal, a real mix of strength and vulnerability. But I have so many new ideas, new characters clamoring for my attention – far more than I can address in my limited writing time. 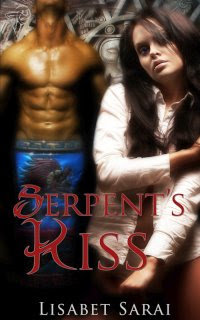 When I got to the end of Serpent's Kiss, though, I had a sudden inspiration that fairly screamed “sequel!”. Elena, the main character, realizes that she is carrying a child, a girl child who may have been fathered by a supernatural creature. Elena herself has gained some power over the course of the book, and she senses that the girl, Estrella, will be special. Now Estrella has joined the ranks of characters screaming “Me! Write about me!” I even went out and bought some more books on ancient Mayan civilization – just in case she forces me to listen to her!

Probably I do need to think about trying my hand at a series – if only for the exercise. Trying to come up with something new every time is a writing challenge. Maintaining a fictional world over several books is a challenge of a different sort, and would very likely teach me a great deal.
Posted by Lisabet Sarai at 12:01 AM