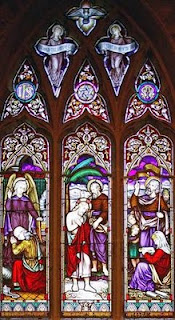 “In the name of the Father, and the Son, and the Holy Ghost, amen.”

“That's good, but fold your hands at the end. It's a prayer, after all.”

“Her child, silly. 'Womb' is a fancy word for stomach.”

“I think you're ready. We'll do it tomorrow. But you can't tell anyone. If you do, you'll go to Hell.”

I was born into a Jewish family, so you might be surprised by how much I know about Roman Catholic ritual. I can recite the Hail Mary and the Lord's Prayer. I know the sacraments and the difference between a mortal and a venal sin. Given a bit of time to search my memory, I can probably tell you the names of many of the more important Catholic saints and explain why they were canonized.

The story behind all this knowledge? I was baptized a Catholic by my best friend when I was eight.

Bridget McNulty (not her real name) lived down the street from us with her parents and a constantly growing assortment of siblings. Her family were not fundamentalists, particularly by today's standards, but Bridget, the first born, was especially devout. She dreamed of becoming a missionary nun. And for some reason she decided that I should be her first convert.

Not that I put up any sort of fight. My religious upbringing was lackadaisical at best. We only went to synagogue (at my grandparents') on Rosh Hashonah and Yom Kippur. Hanukah meant gifts, potato pancakes and gambling with the little tops called dreidels. Passover was a chance to taste the wine and to look for the afikomen, the special piece of matzoh secreted away by the leader of the seder. The child who discovered its hiding place received a shiny quarter. I had little sense of the theological basis of my religion. Yet I think I must have harbored some sort of yearning for spiritual knowledge. When Bridget proposed that she tutor me in the details of her faith, I agreed with enthusiasm. Furthermore, I took my new knowledge seriously – far more seriously than the faith of my fathers.

Every day after school, I'd go over to her house to “play”. We'd crawl into our private place, a hollow inside her hedge, and she'd teach me about original sin and immaculate conception, communion and extreme unction. She set up an altar there, with a crucifix, and taught me to pray. Finally, when she decided that I had assimilated all the requisite information, she blessed some tap water and christened me with a new name.

The funny thing is, I remember much of this quite clearly, but I can't recall what we decided I should be called. Maybe Mary? Or Christine? Of course no one ever called me by that name – not even Bridget. In fact, after my baptism, she seemed to lose interest in our joint rituals to some extent.

A year or so later, Bridget's family moved to another town. My conversion stuck, however. I considered myself Catholic, although I scarcely knew what that meant. I worried about the end of the world. During the New England summer, you sometimes get this atmospheric phenomenon, where thunder clouds will be heaped up on the horizon but a few rays of sun slant through to reach the ground. The sharply defined beams of light look like paths upon which the angels would dance, coming down to announce the Apocalypse. On afternoons like these, I wondered if the prophesies were at last coming true.

(Of course, this was during the Cold War, when we all were sure that the Russians would drop the bomb any day. I figured that was the most likely way that the world would end.)

My secret conversion was responsible for engendering a sense of sexual sin. I didn't exactly know what the mortal sin of “adultery” meant, but I gathered it was something dirty. I started to feel guilty when I stuck my pillow between my legs and rocked back and forth until the good feelings came. I was uncomfortably certain that I was committing adultery, and that I was bound for eternal torment, or at least Purgatory.

It took quite a few years for me to get over the effects of Bridget's catechism. However, becoming a teenager brought so many more immediate problems than whether I'd go to hell that I forgot to worry about it. Still, I think the experience of conversion and the times I accompanied Bridget to Mass (my mother didn't care), listening to the Latin chants, breathing in the incense, inculcated a sense of reverence that I still feel today.

At the same time, that experience touched something in me, wakened a hunger for spiritual experience that still gnaws me. Now, strangely enough, I feed that hunger by writing erotica. I find a connection to the Infinite in the connection with a lover. And I still pray, though I long ago abandoned the formulas Bridget taught.

The conversion is still a secret, too. I've never told anyone who's part of my “real life” that I've been baptized. (And I don't question whether the baptism was legitimate. Somehow I feel that if Bridget and I both believed it, then it was.) Only you, my readers and colleagues, who know my alter ego, are party to this forbidden knowledge.