For this weeks "Forbidden Knowledge" theme, Garce invited us to "Write about a time you discovered something you weren't supposed to know."

I decided to take myself out of the equation and retreated into fiction.

I hope what follows is neither too dark nor too obscure for this blog.

If it needs to be explained then I didn't do it right.

Normal service will be resumed next week 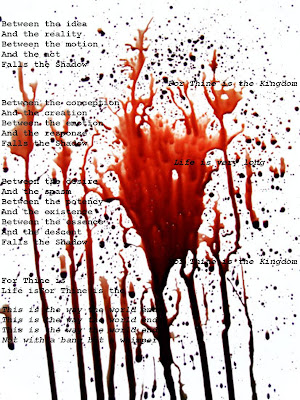 Knowledge has a name.

Speaking the name makes the knowledge real and grants it power over your life.

My family understood that.

Knowledge is the source of all guilt.

In my family, we chose not to know; we refused to name the things that were most important to us.

We were masters of inference, innuendo and unnoticed silences. If those failed us we fell back upon evasion, deflection and denial.

By this means we remained a happy family.

We did not know that my father's fits of impotent anger would be followed by long silent drinking sessions that must never be interuppted.

We did not know that the bruises on my mother's thighs were made by my father's belt.

We did not know that my older sister was afraid not of the dark but of the deeds that darkness cloaked and which could not be named in the daylight.

We were a happy family. Happy families are all the same. Aren't they?

I knew my father taught English at the Grammar School.

I knew he was a kind and gentle man, much loved by his students. You could ask anybody. They would all tell you that.

This is the way the world ends
Not with a bang but a whimper.

I knew that my mother was beautiful and that my sister was brave.

I knew where my father kept his gun.

The police knew that my father and I were alone in the house because my sister had broken her arm in a clumsy fall and my mother had taken her to the hospital.

Our family Doctor knew that I had been so distraught at finding my father dead in his study, his gun still in his hand, a half-empty bottle of whiskey on his desk and a blood-spattered copy of "The Hollow Men" open in front of him, that I had had to be sedated.

The Coroner knew that my father was being treated for depression and should not have mixed whisky, Temazepam and a loaded gun.

My mother, my sister and I knew that things would never be the same.

I knew that sometimes knowledge falls like a shadow and fills the world with darkness.

I knew that a world can end with a bang that starts with a young girl's whimper.