There are some branches of yoga philosophy that hold that each person is born with a certain number of breaths. When you have breathed the last pre-determined breath, you die. Therefore, lengthening your breaths, and slowing your rate of breathing, will also lengthen your life.

I’m not sure if I believe that on a literal level—and if I did, it would be a somewhat panic-inducing thought. Every time I jogged a mile and quickened my breathing, I’d be thinking, “Darn it! There goes a month at the end!”

But metaphorically, at least at some level, it does work for me. Some things in our lives are limited, and some certainly seem limited. For writers, two of the biggest are ideas and time.

It’s a question non-writers put to writers: “Where do you get your ideas?” We all know of writers who seemed to have only one book in them—Emily Bronte (Wuthering Heights), Margaret Mitchell (Gone with the Wind), Harper Lee (To Kill a Mockingbird). Some authors write many books, but seemingly only one story (no, I’m not naming names!). Some authors who seem downright prolific still worry sometimes that they might have dried up or become repetitive.

Fortunately, though, sex—good sex—isn’t about acts, it’s about people. And if there aren’t an infinite number of people, there are at least a good many more than I’ve ever met. Even one person is so much more than one, because you’re constantly changing in reaction to circumstances and experiences. People who have been having more or less the same type of sex with the same person for many, many years (and I am one of these) will say it’s a “you can’t step in the same river twice” sort of thing. I don’t think you could have the same sex twice even if you tried.

Nor is language to describe a variety of people doing a variety of things for a variety of reasons limited. I’m not even opposed to using clichés in erotic writing, as I’ve written before, but those who are needn’t worry that English (or any other language) has been all used up. The classic “poor scholar’s test for plagiarism” is to put seven words of the suspected sentence between quotation marks and plop it into google. That’s also a nice testament to your own originality. It’s encouraging to put your own phrases into google and watch them not come up. Just as painters can still paint unique pictures of flowers, and songwriters new odes to love, so can we still put words together in fresh ways.

So that’s the good news. But there’s another way to see the breath metaphor—as time. We don’t know how many hours have been allotted to us, but we do know there’s a limit. There’s a lifetime limit, and shorter, more pressing limits: only so many weeks before a deadline, only so many days before the weekend, only so many hours before bedtime.

Few writers make a living solely off writing. Instead, writing competes with other, often more lucrative pursuits. My “other job” is editing; and if I have an assured $60 - $75 an hour to edit this, versus a potential $50 if I sell a fiction story… and the mortgage is due in X weeks… Most writers, though, are working a 40+ hour a week job, plus commuting time, and have friends, families, sports, hobbies, and other commitments, and around these they must fit their writing. It can seem circular, sometimes—in order to justify more time writing, the writing should pay; but the writing won’t pay until you can spend more time on it.

Even writing interferes with writing. There is the story crafting itself, but then the editing and revising, then the letters to agents and publishers and anthology editors. Once a story or book is sold comes the blogging and social networking and asking for reviews. Sometimes the “writing to support the writing” takes as much time as the writing.

Whenever I come across that yogic saying on each person having only a certain number of breaths for his/her lifetime, I’m reminded of an old episode of the television comedy “Get Smart.” It doesn’t matter how, trust me, but somehow Max and the Chief get locked inside an airtight room-sized bank vault. Somehow they know the room contains only enough oxygen for them to stay alive for an hour. Once this is established, Max begins vigorously exercising: jumping jacks and push-ups and the like. “Max! What are you doing?!” asks the scandalized Chief. “Hey. You use your air how you want to, and I’ll use mine how I want to,” Max replies.

Now, it would be selfish of us to use up other authors’ air, I mean, time (by pestering them with email or phone calls when they’re working, for example), but yes, we do get to choose how to spend our own hours. We can spend them writing, or revising, or thinking, or relaxing, or experiencing things to later write about, or eating & exercising & sleeping to stay healthy as we write. Everyone will choose a different way to spend those hours. The only mistake, I think, would be to lose sight of the fact that our time—our breath—is limited, and that our choice of how to spend it should be deliberate. 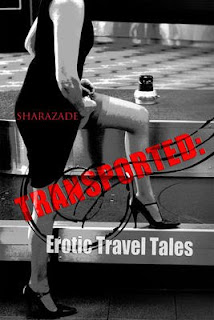 Find Shar at her blog on writing and reading at http://sharazade.fannypress.com.

Posted by Lisabet Sarai at 6:00 AM