Among the visual storytellers, none understood the power of light and shadow like Alfred Hitchcock. He fought colorization of his black and white works since it would destroy the subtlety he worked so hard to achieve and used to great effect. Light - to illuminate. Sometimes light deliberately misdirected our attention. Sometimes, despite the lights, the horror came anyway. Shadow - to blend. Sometimes he used it to illustrate the murkiness of the moral issues. Darkness - to conceal. 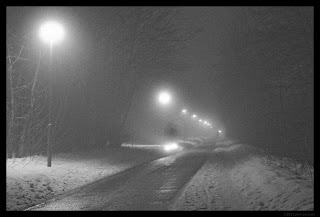 (this picture isn't from a Hitchcock flick)

Here, we have a picture of a straight, paved lane cleared of snow. Lights stand at even intervals to illuminate it. Everything on the surface points to civilization, order, neatness. This is the structure, stripped of the distraction of color. As with any story, the bones of it are what we expect. We expect our world to continue in its orderly fashion with all the safety nets civilization has built into it. We expect a story to have a beginning, a middle, and an end. We expect a story to start with conflict and end in resolution. Order restored. Whew. We can all sleep safely. We can dare to turn out the lights, because we've conquered everything lurking in the dark.

Past the neat row of lights are trees that have been confined, allowed to grow to a certain point and then held at bay by human power. It's another comforting show of our control over our world. Except that we don't really control anything, do we? As we've been brutally reminded time and again on the idyllic ocean shores of southern Thailand, in New Zealand (not only the recent earthquake, but the mine explosion and collapse that killed so many miners), in Haiti, and in Japan, any delusions that we have about our importance on this earth can be shattered in seconds.

Back to the picture.

Maybe we can hack back a stand of trees, but we can't contain the fog. It overflows the barrier we set at the tree line and seeps into the human world. It makes the familiar seem different and untrustworthy. It swallows light. It holds us at bay.

This is conflict. Our certain world wiped away, or even simply cast in new light that makes us rethink all that we trusted. It's the middle of the story. Some things remain, such as the path, but who knows where it will lead?

And what about that figure lurking far off to (your) right? He, or she, seems to stand between the last two lights, but that's a trick of perspective. The lights are to the left of the path. The figure is to the right. Does this mean that while it seems this person walks in light, s/he is actually on the side of darkness? And what is that long pole s/he is holding? Weapon, or tool? Or is that really a person? Are our brains trying too hard to create a recognizable pattern out of something random? Does the idea of a person lurking, or waiting, further down the path comfort or frighten us? Would we rather be alone in this little illusion of human superiority over nature, or risk meeting another person who could destroy your faith?

The only thing you can be certain of is that there's potential chaos in that fog. Care to take a stroll?
Posted by Kathleen Bradean at 5:58 AM