Curse Them All For Me, Stephen

I've never found out what he was doing in it. I didn't want to. It's one of those snapshots of a moment in time, a capture of someone's feelings and what they're doing rather than a pose - the way all of the pictures of me are. I have one black and white photo of myself but it's nothing like this thing - it's just me on my wedding day, looking down because the photographer told me to, and though I do think the black and white of it has given me the look of a rather ugly silent movie star - which is how I've always thought of my appearance, to be honest - I don't think it's a particularly interesting picture.
Where as this picture of Stephen King is interesting. Of course, realistically I know he's probably just protesting about the price of milk at his corner shop or something like it, but there's just this Stephen King loving side of me - the side that thrills over every dark and deadly thing that happens in any of his books - that likes to imagine there's something more going on.
You can't see his eyes, so they're probably burning with the souls of a thousand demons. And there's definitely something lurking in that full, passionate beard he has, all black and made blacker still by the lack of colour in the picture.
And he's holding something in his hand, too - something that could be a till receipt from that milk he bought. Or it could just be a curse he bought from a gypsy in some enchanted circus, and now he's going to lay it on the heads of all the non-believers.
He looks great in that picture. He looks like a different Stephen King - the Stephen King his books always promise because come on. We all know he just writes himself into every book. But you know what? I don't care. Because if I lived in a town AND THEN EVOL CAME, I'd almost certainly want this guy: 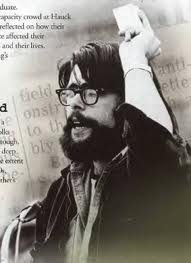 On my side.
Posted by Charlotte Stein aka The Mighty Viper at 6:00 AM