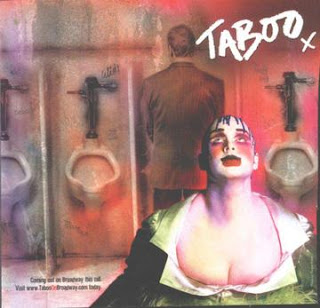 My books and stories are generally acknowledged to be pretty steamy. When I need a fantasy to get myself off, though, I won't use a scene from my books. No, they're too tame. Having been challenged by Mike's topic this week, I have to confess that in the privacy of my own bedroom, I'll venture (mentally) into far more extreme territory. Shall I mention some of my favorite fantasies here? Or will I alienate my readers? (Will Blogger cancel my account? Will I start to get hate mail?)

Suffice to say that most of my self-pleasuring scenarios couldn't be published, because they break the common rules. I don't fantasize about snuff or real violence, but almost anything else you could imagine - just about anything else that a mainstream erotica publisher would forbid - is likely to show up occasionally.

It's not just the imagined actions that turn me on. No, the fact that they're taboo is at least as arousing as activities themselves. The sense of transgression is integral to the excitement. Publicly, I come across as an intelligent, civilized, middle-aged lady, but I'm a perv at heart. The filthier and more forbidden the act, the more it appeals.

I've learned not to expose the depths of my depraved imagination in my stories. I know that the more extreme elements will be edited out, even if they don't violate the official statutes.

I'm really impressed that the enema made it into Ruby's Rules. But then, that was originally published by Blue Moon, who scarcely did any editing at all!

I recently wrote an incest story called "A Breed Apart" for Coming Together, the charity imprint. CT is publishing a series of stories on taboo topics, in protest to the recent "Banned by Amazon" fiasco. I haven't had such fun writing a story in ages. Even so, I pulled some punches. The story skirts some of the more controversial aspects of the topic, featuring as it does a sexual relationship between adult siblings (twins) who are not, in fact, strictly human but belong to another race of beings.

You may ask how I manage to continue writing sex scenes that don't feature highly taboo topics and make them convincing. Transference. I transfer emotions from one set of activities or events to another.

For my own personal pleasure, though, I'm not afraid to cross the line, imagining things that "normal" people might find shocking, disgusting or offensive. Would I do these things in real life? That's not the point. Taboos are mental constructs. When shattered, they release enough emotional energy to fuel the most intense orgasms on the planet.