Not A Lot Of People Know That 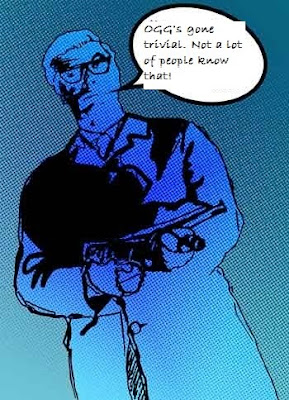 Michael Caine convinced me that, combined with enough dry wit and self-effacing charm, trivia could be cool. Mind you, he also looked good in those horn-rimmed NHS specs that were the bane of my early teens.

I acquire trivia the way a white shirt acquires coffee stains; there's no plan involved, I'm just certain that it's going to happen.

I've always been able to play “Six Degrees Of Kevin Bacon” without breaking a sweat. I grew up listening to radio stations where you had to be able to build chains at least seven songs long with each song sharing a lyric or a theme or a performer or a writer.

Things only became seriously uncool when I fell prey to addiction. At this point I should shuffle to my feet, hang my head, wring my hands and murmur: “My name is Mike and I'm addicted to etymology.”

As my fellow addicts will already know, etymology is the study of the true sense of a word – coming from the Greek word etymon meaning true sense and logos meaning reason, idea or word.

At first I told myself that I could handle etymology, that it was just a means to an end, that I was the user not the used. I rationalized that words were the instruments by which I brought meaning to my life, shaping my thoughts, memories and perceptions so it was only natural that I should want to know more about what words mean, where they came from, how they evolved, and how they are still changing.

By my late teens, even I had to admit that what started as interest had turned into addiction. I owned three etymology dictionaries. I lost hours following chains of meaning from one word to the next and yet seldom used these words in the presence of others.

I started acting out a school. In the grip of my addiction I could not understand why teachers reacted badly when I explained that it was illogical to ask me not to run in corridors because corridor came from correre, meaning to run and was originally used to describe galleries at the top of fortifications that soldiers could run along while remaining protected. Nor did I understand why they were unimpressed by my assertion that gym-kit was a contradiction in terms as gymnasium was originally a place for training naked, taking its roots from the word gymnos meaning naked.

As I matured, I came to accept, that non-addicts saw things differently.

Non-addicts used words as if they were blank Scrabble tiles, cramming into them whatever meaning seemed to fit the ear and then repeating it often in the hope of making it true.

Non-addicts seldom felt drawn to use a dictionary of any kind and those who did dip into them could stop after a single word if they wanted to.

Non-addicts did not feel the seductive pull of etymology and often branded the hard-won fruits of my research as trivia.

Not many people know this, but trivia is the plural of the word trivium meaning the place where three roads meet; implying well beaten ground that everyone has access to. Trivial became the descriptor for grammar, rhetoric, and dialectic. These were the artes sermocinales, or language skills and were seen as the least important three of the seven Liberal Arts.

By the way, the Liberal Arts were so named because the Romans believed they were the things that a Free Man needed to study to enlarge his intellect without being immediately useful for anything.

I accept that I will always be an addict. Like many high-functioning addicts I hide behind the mask of the creative process and tell people that I am a writer searching for the truth and not a wordster jonesing for his next high.

Did you know that Jonesing is believed to have become a term for addiction because of the high incidence of drug addicts who lived in Great Jones Alley, off Great Jones Street, between Broadway and Lafayette Street?

This is slang of course, and so not entirely respectable, but then slang was originally a term used to describe the secret language used by beggars and thieves to prevent outsiders from understanding them.

I could continue... beggars were originally lay brothers who helped mendicants.

But I should... Mendicant comes from the Latin mendicantem meaning beggar but also cripple (menda meaning fault of physical defect), which creates a link to mendacious meaning to lie and deceive.