Refuge of the Road 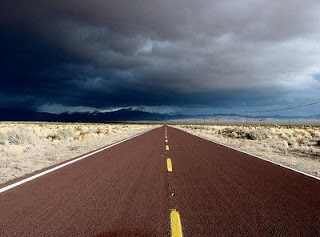 It's barely seven. The crystalline sky shades from indigo in the west to powder blue in the east, where the sun has already climbed above the horizon. The parched air still makes me shiver in my denim jacket. I know that won't last long; I'll be sweating by eight thirty.

Empty highway stretches to the horizon, to my left and right, ruler straight, a crisp black line stitching across the endless scrub. The land is shades of gold and amber in the lemony morning light, punctuated by pomegranate shadows where a boulder pokes through the thin soil. An occasional saguaro raises its dusty arms. It's a gray-green caricature of me with my thumb out, waving down my next ride.

The pick-up is visible from miles away, the only vehicle on this pristine morning road. I watch its progress, as it grows from a red dot to a rust-eaten hulk of steel with a Chevy logo above the radiator. I wait, breathing deeply, calming my racing pulse. Either he'll stop, or he won't. It doesn't matter.

He pulls over with a squeal and checks me out through the cranked down window. “Young girl like you shouldn't be hitching out here, all alone. It's not safe.”

I favor him with my sweetest smile. “I can take care of myself. Can you give me a ride?” His face is in shadow but I like his voice, deep and slow like the earth shifting under those mountains huddling off to the right.

“Sure. Where you headed?”

I name a town some three hundred miles to the west. “You going that far?”

“Lady, I'm going all the way to LA!” His laugh tumbles out, free, somehow innocent. “Climb aboard.”

After tossing my duffel into the back of the truck, I clamber up to the bench seat. He's off the shoulder and onto the pavement almost before I can close the door. I lurch, slamming into his arm. Heat shimmers through me, though the air outside hasn't lost its chill.

“Sorry!” His grin is crooked. So is his nose, a bit, but he has a rough-hewn, solid quality about his face that appeals to me. “I've gotta be in Tarzana by the day after tomorrow for my brother's wedding. Guess I'm feeling the time pressure, a bit.”

“Never mind. Are you sure you want a rider?I don't want to slow you down.”

“Naw, that's fine. I like having the company. Keeps me from getting bored. I'm Dale, by the way.”

I tell him my name is Amy. It could be, after all.

“Pleased to meet you, Amy.” He doesn't offer to shake. The speedometer's grazing ninety but despite that, he's a careful driver, both hands on the wheel most of the time. I find myself examining those hands, which are blunt-fingered and dusted with gold-brown hair, probably calloused from manual labor. He strikes me as a rancher type, or maybe a carpenter.

“I've got a hardware store in North Platte,” he tells me as we burn up the highway. “Can't really afford to take a week off, but Jim's my only family. What can I do? I know he'd come to my wedding.”

No band on those strong, stubby fingers. Not that it would matter.

After our introductions, we sit in companionable silence as the scenery flies by. He doesn't ask about me. He's got good manners, my speed demon driver. I'm pleased. I don't like to lie.

The sun climbs and we start to bake. I peel off my jacket, then my flannel shirt. He glances over. My nipples make noticeable peaks in my white tee. They wind into tighter knots as his eyes rake over me. The crotch of my jeans is soaked. He doesn't make a move. Polite, like I said. I know he feels the tension though, crackling through the cab. There's a visible lump in his denim work pants. He makes little noises of discomfort on the few occasions that he needs to work the clutch or the brake.

We've got the windows cranked wide. The hot desert air steals the moisture from my lips and whips my hair into wild tangles. He turns on some oldies station and songs from my mom's era blast out, “Satisfaction”, “Thunder Road”, “Life in the Fast Lane”. He's singing along, but the wind carries the words away.

I lean back against the sticky upholstery, close my eyes, listen to the music and the wind. Quiet lust hums through me, beating like a second heart between my thighs. I savor the only peace I know, the anonymous blessing of the endless road.

We don't stop. Together, we devour the miles. He has water in the truck, and sandwiches. We eat while he drives, pretending to ignore the sparks that shoot through us when our hands touch. I offer to spell him but he shakes his head. “I like to be in control,” he tells me. Lightning sizzles up my spine, sweet anticipation of a coming storm.

The sky overhead is a translucent teal when we finally pull in to the truck stop. I head for the toilet while he gasses up. He pays the motel clerk in cash, for one room. We don't discuss it at all. I smile at him, making myself as pretty as I'm able. I'm grateful and I want him to know it.

The room smells of mold and cigarette smoke overlaid with air freshener. Familiar, comforting. The drooping beige patterned drapes, the dun-green carpet, the fake pine paneling – I've been here before, haven't I? But this is the furthest west I've made it, so far.

He throws the deadbolt and we turn to one another in silent agreement. I make the first move, however, reaching up to pull his lips to mine. They're firm and sure, meeting me halfway, pushing beyond. His tongue in my mouth is ruder, more demanding, than I'd expected. Those hardware store hands roam over my body as we kiss, dragging up my shirt, worming into my jeans, fumbling with my zipper. I savor the hardness of him, everywhere, his rough fingers, his chest, the thigh nudging mine apart - not just the eager lump grinding against my mons.

We grope each other like teenagers, still kissing. The heat of the long day driving has soaked into our pores. We're fevered and hungry.

We break our clinch to throw off the remains of our clothing. He's got muscles, but a bit of a paunch, too, a little softness that I don't mind at all. And hair, lots of it, brown curls on his chest, meandering down his belly to the thicket around his cock, solid as the rest of him. He bears me down onto the sagging mattress, grabs my wrists and holds them above my head while he drives into me.

There's no preparation, no foreplay, but that doesn't matter. I've been dripping and ready for hours. His cock in my cunt is everything I crave: pleasure, connection, oblivion.

We clean up, separately, in the rust-stained shower stall. He treats me to steak and beer at the diner next door to the motel. We sit in the booth, on the same bench, our thighs touching, floating on the cloud of new intimacy. The blowsy waitress gives me a complicit wink. Dale tells me about his Nebraska childhood, his reckless younger brother, the wife who died of cancer two years after they married. I spin him tales of my college years, my poems, my travels, a fantasy laced with strands of truth.

Back in our room, tipsy with beer and fresh lust, we fuck again. This time it's slow and sweet. There's time to feel every inch of him, sliding over my aching clit, through my slick folds, to settle in my cunt. His fingers trace the welts he left in our first coupling. He murmurs apologies; I kiss them away. After what feels like hours of bliss, we come together. His cock erupts inside me, inside the condom he bought in the diner men's room. His heat floods me, bears me away to some quiet, sparkling place where there's nothing but the beat of our hearts.

We cuddle together afterward, drifting toward sleep. “Amy,” he murmurs, licking my earlobe. “Maybe you'd like to come with me? To LA? We'd have a great time, girl...” His voice trails off into a yawn.

I wake at five, when the first hint of dawn filters through the lopsided curtains, and dress as silently as I can. Dale's still rocking on the currents of his dreams. He lies curled on his side, arms drawn in to his chest. I have the urge to stroke my palm over the golden down on his back, to plant one last kiss on his pale buttocks. I don't give in.

Donning my sneakers outside the door, I hoist my duffel onto my shoulder and head for the highway. I walk back, retracing our path for at least a mile, before I stop and put my bag down. I don't want Dale to pass me on his way west.

I'm hungry. I can't tell if the sensation is physical or emotional.

I watch the eastern sky brighten from ash-gray to pearl to peach. I fill my lungs with the crisp scent of sagebrush. My pussy tingles whenever the seam of my jeans grazes my clit. The road sweeps away from me in both directions, a graceful ribbon of darkness in the ripening dawn, a river of possibility. Calm settles on my restless spirit.

Humming a song from the seventies, I stick out my thumb.
Posted by Lisabet Sarai at 3:02 AM

Email ThisBlogThis!Share to TwitterShare to FacebookShare to Pinterest
Labels: Joni Mitchell, on the road, wanderlust