Reading in the Borderlands

Without You, There Is No Us by Suki Kim 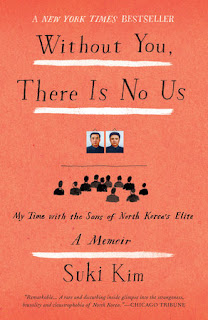 You know a book is good when you have lunch with someone and spend the entire time just telling them about the book, story after story. This is a memoir about Suki Kim’s experience teaching at a school in North Korea (it’s a really big deal that she was there, because outsiders are rarely allowed in).

It captivated me utterly. Her love for her students is obvious, even as she fears them, knowing that at any time one of them could report her for saying something that breaks the many spoken and unspoken rules of the place. Her depiction of North Korea is fascinating and disturbing. I am a fan of dystopian fiction, and I’ve never read about a real place that seems like it would fit so well in a dystopian novel. At the same time, my fascination feels voyeuristic and weird since this isn’t fiction. I was compelled by her portrayal of the psychological effects of watching her words and action as carefully as she has to while she is there. Finally, her discussion of the history of the split between North and South Korea, both informative and personal, moved me deeply. I didn’t know much of anything about that before reading this book, but exile, diaspora, and separation are themes that always speak to me.

Her writing style is of the spare and poetic variety that I love the most.

I can’t recommend this one enough. 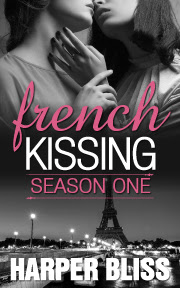 I downloaded the pilot episode of this for free so long ago that I don’t even remember doing it, and just never got around to reading it. Then I found myself waiting around somewhere with only my Kindle to entertain me and rediscovered it. I would describe this book as “lesbian drama in Paris,” and it’s set up as if it were a television series. It was just the sort of light, absorbing read I needed at the time. I started reading casually, but then my pace and obsession picked up, and before I knew it, I had devoured both seasons (and am now eagerly awaiting the third!).

There are not incidental resemblances to The L-word series. I picture Bliss’s Steph as played by Kate Moennig, absolutely (in other words, like The L-word’s Shane). Bliss’s Nadia and Juliette feel like the Bette and Tina of French Kissing.

However, Bliss makes all that her own, and doesn’t fall into the sorts of missteps common to long, dramatic stories. Steph is a womanizer, but her arc is really about true love. The L-word never used Shane so well.

I often find that drama gets either too tense or too repetitive for me. French Kissing, however, is excellently paced, and its conflicts feel fresh and distinct.

I’d recommend it for anyone to whom the idea of lesbian drama in Paris appeals. And you’d better believe I’ll be downloading season three later this month! 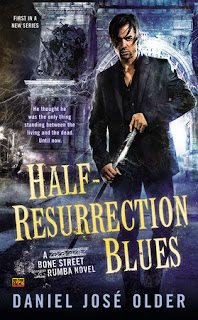 This is a solid urban fantasy with some twists that make it better than usual. Older’s voice is refreshing and musical. He’s going for a stylish noir, and he makes that his own, both checking the classic boxes and creating something different and satisfying in its own way.

A big part of that for me had to do with race. I was pleasantly surprised to see quotations from Gloria Anzaldua’s Borderlands introducing the book. As a mixed-race person who never feels like I belong anywhere, this book’s themes spoke to me deeply, and the Anzaldua quotes told me right off the bat to expect that.

The main character, Carlos, is halfway between living and dead, and Older uses that to explore all sorts of halfways. Being brown. Being open to emotion, but also sort of broken. Being weak and strong at the same time. This is the world I live in and know, and it meant a lot to me to read it. I loved his racial descriptions and observations because the US can be so literally black and white about race that I rarely encounter work that recognizes more complexity.

Though I was sold on the voice immediately, it took me a bit to get into the story. Once part three hit, however, I was in that state where you’re trying to wave people away so you can get back to reading. I’ve ordered the next Bone Street Rumba novel, and am looking forward to it. 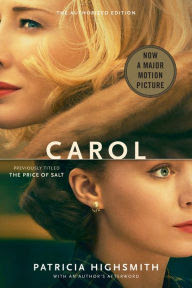 I saw the movie, and (heresy time) did not love it as much as my favorite queer websites seemed to think I would. To me, there was a sterility between Cate Blanchett’s Carol and Rooney Mara’s Therese that made the love story difficult to accept. I also felt uneasy with their age difference—that’s a thing that tends to bother me.

In the book, however, it’s not sterility. It’s a sort of spareness and restraint filled with longing and questioning. It takes me back to when I loved a woman but didn’t really understand that it was possible to love a woman, when I had desires that made no sense to me because I had no context for them.

There is a strong literary sensibility to this book. There are scenes that feel significant but you’re not sure why. There’s a sense of mystery to everything that happens.

The writing surprises me. I notice inconsistencies of plot and detail, but somehow I forgive it all. I wonder how some of these things made it through editing, but they don’t seem to take away from the way the story captivates me. There is something so private and internal about this book that I’m not surprised the movie didn’t work for me.

I’m still reading this one and am about halfway through. I’m curious how I will feel in the end. In the movie, the end felt empty to me. I didn’t really want Therese and Carol to be together. I suspect it may be different for me with the book.

Your writing: For Coming Together: Positively Sexy

And finally, there’s what I plan to be reading over the next six months: submissions for the new book I’m editing. It’s for Coming Together, it’s a collection of erotica about characters who have STIs, and it will benefit the Center for Sexual Pleasure and Health. You can read more about it here. Definitely ask me if you have any questions!

Posted by Annabeth Leong at 7:31 AM

Email ThisBlogThis!Share to TwitterShare to FacebookShare to Pinterest
Labels: Carol, Coming Together: Positively Sexy, Daniel Jose Older, editing erotica, French Kissing, Half Resurrection Blues, Harper Bliss, Patricia Highsmith, Suki Kim, Without You There Is No Us