In 2010 or thereabouts, I wrote a book called Anonymous. It could just as easily be called Obsession.

It's about Hannah, a woman who lost her executive finance job when the market crashed. She's looking for work, but there's nothing available at her level. Being unemployed is getting to her, and it's having a definite impact on her marriage to Nathaniel.

The first thing we find out about this couple is that Nathaniel wants to get with another man and Hannah wants to watch. It's a fantasy they revisit again and again. The first scene takes place during a power outage. When they've got no TV to entertain themselves, they escape into their fantasy life together.

You get the sense that they've been replaying this scene for years: imagining what it would be like. Asking, "What would you do if we had a guy right here right now?" Getting ridiculously turned on by the answer.

You also get the sense that, if Hannah had a job to occupy her mind and her time, their fantasy life might never have spilled over into reality.

Hannah and Nathaniel have one caveat to their shared desire: they don't want to invite a guy they know into the bedroom. Could get really complicated if they brought in a friend or one of Nathaniel's coworkers and things went wrong. Hannah's convinced they're looking for a stranger.

In fact, she wants someone totally anonymous.

Anonymous is a "careful what you wish for" book, in a lot of ways. Hannah's got too much time on her hands, and she uses it to set up some no-strings-attached stranger sex.

Except the big event doesn't go exactly as planned, which puts pressure on Nathaniel and Hannah's marriage. This is a book in three parts (not a trilogy, just a story that's divided into three sections). Everything I've mentioned so far takes place in Part One.

To me, it's what comes AFTER the "getting what you want" bit that's most interesting. Hannah can't handle not knowing. She becomes obsessed with finding out the true identity of Mr. Anonymous. The power of that obsession drives almost every decision she makes. Her obsession takes over. So much other stuff happens in the second two parts of this book, but Hannah's never the same after that one night.

Obsession drives Hannah to take a job she normally wouldn't have. I wonder if it's detrimental to her life or not. I remember one reviewer saying she didn't feel that Hannah's obsession took away from her relationship with Nathaniel. She didn't find the obsession unhealthy.

I'm not so sure. But what do I know? The writer is the last person you should ask about a book. We have a very skewed perspective. 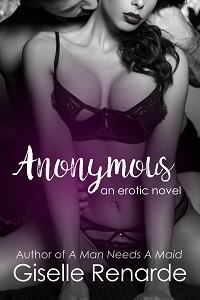 Anonymous was briefly off the market when its original publisher closed down, but it's BACK as of today and if you click real quick you might just find it at Amazon.

As an introductory price for the re-release, it's only $0.99 or free if you're a Kindle Unlimited subscriber. Here's the link:

Posted by Giselle Renarde at 12:31 AM