I don't often like to get involved in series (serieses?). I've noticed, in film, TV  and books, that when a series becomes popular, often the writer or producer will try to extend the series beyond its originally conceived length to make more money. For obvious reasons, these additional works will most often suck, and suck bigtime.

Take, for example, Karen Marie Moning's Fever series, which I believe was originally conceived as five books, but has, unfortunately, extended to eight. The last three, to put it mildly, range from not very good to really awful. 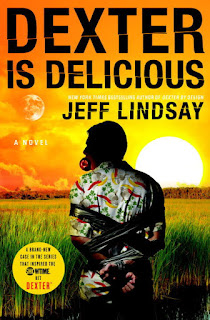 But it's an unexpected pleasure to find a series that's longer (and better!) than one thought. So it is with Dexter, the book series that the Showtime TV series was based on. I thought there were only three books. One day, while wandering through Amazon, I discovered that there are eight.

What's really cool is that the TV show didn't follow the books in many particulars. I don't want to give spoilers, but at least one major character in the TV series got killed off in the first book. Another lost significant body parts in the second. And so on.

If you're familiar with the characters of Astor and Cody, they reveal some major personality quirks, which Dexter finds quite...intriguing, even attractive. You have to read the books to find out (tee-hee-hee).

I occasionally bestir my mind to read non-fiction, instead of the pop fiction I prefer. But I do like to stretch my mental muscles, and so read Daniel Gilbert's Stumbling on Happiness. 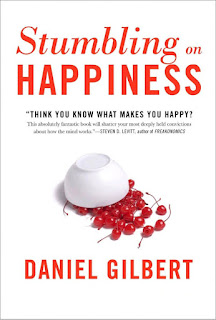 Gilbert's main thesis is that we fail to act in ways that make us happy because we misremember the past and misperceive the present, which makes it almost impossible to correctly figure out what will make us happy in the future.

The author does advise checking out others' reactions to the same stimuli, and discarding the notion that each of us in unique.

I would also imagine that journaling daily, and then rereading would be helpful.

I can't recommend this book enough. Gilbert writes in a witty, conversational style that sort-of disguises the pithy nature of the information he's transmitting--he describes and discusses the results of many, many experiments and tests. I highlighted so much in the digital copy I borrowed that I decided while transcribing all of Gilbert's fascinating conclusions, that it would be easier if I just bought the book. So I did.

And the information is precious. After all, we all want to be happy, right?