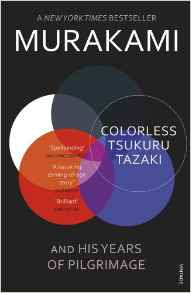 This fortnight here at the Grip, we tackle our recurring topic “What are you reading?” I’m always in the middle of several books, but lately most have left me with a ho-hum feeling. When I realized that this topic was looming, though, I decided to crack open a novel I’ve been “saving” since I bought it a couple of months ago: Colorless Tsukuru Tazaki and HisYears of Pilgrimage, by Haruki Murakami. I’m now about two-thirds of the way through this three hundred page volume, certainly far enough to chronicle my feelings here.

Murakami has been one of my favorite authors since I first read A WildSheep Chase, more than thirty years ago. I’m not alone in this sentiment; Colorless Tsukuru Tazaki sold more than a million copies in Japan during the first week after its release.

When I try to analyze why I enjoy his work so much, though, I’m left with a bit of puzzle.

One thing that normally attracts me to an author is originality or diversity. For instance, I love T.C. Boyle’s chameleon-like ability to produce a wildly different type of story with each release. Murakami’s books, in contrast, tend to be quite similar to one another in language and tone. His characters also share many characteristics from one book to the next. His heroes tend to be quiet, hard working, nondescript, often lonely, men, drifting almost anonymously through Japanese society.

Thirty-something Tsukuru Tazaki fits this mold exactly. He lives alone in a Tokyo condo and works as an engineer building railroad stations (which happen to be one of his rare passions). He does his own laundry and often cooks his own simple food, drinks alcohol sparingly, swims regularly at the public pool for exercise and to quiet his mind. He has never been outside Japan. He has no friends—in fact an issue at the crux of this story—until he meets Sara, a enigmatic woman to whom he’s strongly attracted, but about whom he knows little.

Hardly an alpha hero. Hardly a hero at all, by the standards of popular literature, but quite typical of Murakami’s protagonists.

I also admire books with intricate and beautifully constructed structure, plots that not only provide interesting conflicts and dramatic resolutions, but which also showcase the author’s awareness of and ability to control the narrative. Examples that come to mind include Barbara Kingsolver’s Flight Behavior and Erin Morgenstern’s The Night Circus. In these books, no detail is insignificant. Themes or events early in the novel turn out to have profound impacts by the end.

Murakami’s books, in contrast, meander from one event to the next, taking side trips along the way, which may or may not turn out to be relevant to the book as a whole. Murakami is also a jazz musician, and sometimes his books feel like improvisations. In addition, there’s little rise in tension. The story arc is so gradual as to be almost undetectable.

Colorless Tsukuru Tazaki follows this pattern, although it begins with an emotional cataclysm. During his high school years in Nagoya, Tsukuru Tazaki (whose first name means “the builder”) enjoyed a remarkable, close relationship with four friends. Studious Akamatsu (“red pine”), athletic Oumi (“blue sea”), beautiful Shirane (“white root”), warm Kurono (“black field”) and Tsukuru were inseparable for much of their teenage life. They spent work and play time together; they shared experiences and ideas; they complemented one another’s personalities. There was something intoxicating, almost erotic about their closeness, although the relations between the male and female members of the group were entirely platonic. Together the five were as much of a whole as the five fingers on a hand. Then during Tsukuru’s first year of university, the four friends whose names include colors suddenly rejected him. They refused to communicate with him. Furthermore, they would not tell him the reason.

Tsukuru almost dies as a result of this sudden amputation from the people he loves. The shock and grief are overwhelming. He stops eating. He sinks into grief and becomes preoccupied with death, as emotional pain totally consumes him. Yet Murakami describes this so calmly that the impact feels muted.

“Perhaps he didn’t commit suicide then because he couldn’t conceive of a method that fit the pure and intense feelings he had toward death. But the method was beside the point. If there had been a door within reach that led straight to death, he wouldn’t have hesitated to push it open, without a second thought, as if it were just part of ordinary life. For better or for worse, though, there was no such door nearby.”

This passage offers a sense of Murakami’s graceful, fluid style, as well as the distance he always seems to preserve between the reader and his characters.

The book does have a plot. Indeed, it is in some sense a classic mystery, as Tsukuru finally takes action to discover the truth of why his friends spurned him. He is set upon this quest by the insightful Sara, who recognizes that he can’t fully participate in building his relationship with her because he’s stuck in the past, pinned like a butterfly to an empty life by the pain of his old loss.

Still, it’s not really the plot that’s pulling me forward in the book, making it hard for me to stop reading at night even though I know I’ll be sorry when the alarm clock rings the next day.

What is it about Murakami’s work that excites me? Why am I trying to ration this book, so as not to finish it too quickly?

One answer lies in the richness of ideas the author explores. His characters tend to have long, philosophical conversations full of startling insights (which may or may not be important for the “plot”). Murakami is interested in life, death, talent, music, art, language, evil, logic, fate, luck, spirituality, relationships, and the nature of reality. There’s a deep pleasure in reading these conversations. You think, “Yes, that’s exactly right, that captures the truth.” Or sometimes, “what a remarkable perspective; that’s never occurred to me.” I find it difficult to retain these insights, just as it’s hard to hold on to the details of a dream. All you recall are the emotions. Of course, one joy of a book (especially a print book like this one I’m reading) is the ability to go back and re-visit favorite passages.

Murakami’s language is beautifully precise, whether he is describing inner or outer states of being. He has a gift for creating images that capture the essence of his subject. As an author, I can appreciate both the final effects and the difficulty of achieving them.

However, the main feature that calls me back to this author’s work may be the magic. Every one of his novels incorporates some hint of the miraculous or the unexplained. Don’t misunderstand me; there are no wizards or mages in Murakami’s books, no shapeshifters, blood drinkers or demons that characterize the paranormal genre. Instead, there are synchronicities, coincidences that defy logic, or states of being that take the characters beyond the material world. This is more like the magical realism that characterizes Latin American fiction like that of Gabriel Garcia Marquez or Laura Esquivel.The Latin magic is more vivid, though, portrayed in primary colors. Murakami, in contrast, describes these marvels in the same subdued and measured prose he uses for the rest of his books.

In Colorless Tsukuru Tazaki, for example, Tsukuru has a disturbing lucid dream about his old friends as a well as a new friend, Haida (who vanishes not long after). The dream is a harbinger of reality, foreshadowing the reason his friends cut him off. When Tsukuru travels to Finland, where Kurono has moved, every experience seems edged with magic. He encounters the people he needs to assist him on his quest.

Like many other aspects of Murakami’s work, it’s difficult to pinpoint exactly where the sense of magic comes from. It slips away, leaving a memory, like the refrain of a song that sticks in your mind, whose title you can’t recall. It’s haunting, though, creating a persistent sense that life includes something beyond the bare bones of physical experience. Often we can’t see this something, but it shines through the deceptively mundane events in Murakami’s stories, drawing the mind and the heart.

Email ThisBlogThis!Share to TwitterShare to FacebookShare to Pinterest
Labels: Colorless Tsukuru Tazaki and his Years of Pilgrimage, Haruki Murakami, magical realism, what are you reading