Menna van Praag’s fantasy romances always involve magical places (usually shops) in Cambridge, England. In The Lost Art of Letter-Writing (to be released Feb. 16, 2017), Clara Cohen owns a stationary shop where visitors are drawn in by a desire to write something, which can include letters to dead loved ones. Here is what the visitors see:

"The walls of the little shop are lined with letters, hundreds and hundreds of letters,in every colour of ink and paper and every style of handwriting. Dark oak cabinets,containing writing papers in a thousand different designs: papers lined with silver leaf,imbedded with roses and violets, papers studded with glittering foil stars, or painted with watercolour sunflowers – each unique and furnished with matching envelopes.

Shelves sit above the cabinets, weighed down with a rainbow of notebooks: bound in leather, swathed in silk, embroidered on linen or cotton, some made of paper and flower petals but none the same as any other.

One corner of the little stationery shop is clear of any papers, pens or other writing paraphernalia. Instead there stands a delicate ornate Victorian writing desk made of mahogany and inlaid with mother-of-pearl, containing many drawers – one of them curiously locked and impossible to open – and accompanied by a chair cushioned with
dark green velvet.

It is here that Clara’s particular magic takes place." 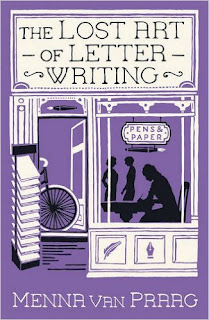 Visitors who aren’t sure what to say are invited to sit at the Victorian writing desk and offered a special pen which helps them express themselves. After they’ve finished, they can mail their letters right in the shop, where there is a special slot for letters to the dead.

Clara herself seems to have a special ability to sense who needs to receive a special message, and she recognizes these people when she passes by them or their houses. She sends them the letters they need to receive, with help from her special pen.

The first five chapters of this book, sent out as a teaser to anyone in the MVP newsletter list who asks for them, describe a sad widower who receives an anonymous letter that begins lifting him out of his grief. Clara visits her mother, Sophia, who keeps a clutter-free home and discards everything that seems useless. Sophia casually mentions a lost cookbook that Clara’s grandmother wrote, for which she was given a special pen to sign autographs. This seems like a clue to the mystery of Clara’s magical shop, inherited from her grandfather. Clara knows that she is descended from Jewish refugees from the Netherlands who immigrated to England in the 1930s, but she doesn’t know enough, and wants to find out.

Readers who want to learn about the connection between the magical shop and Clara’s roots need to read the entire book. (I probably won’t be able to resist.) Clara will undoubtedly learn something that will improve her own life and probably bring her a love-interest. As cheesy as stories about love-magic usually are, I can’t disagree with the claim that communication in letters sets up a bond between the sender and the receiver, and that a good letter is worth treasuring forever.

My own version of the enticing lost cookbook by Clara’s grandmother is a dilapidated hardcover book about teaching poetry to secondary-school students, titled The Hollow Reed, published in 1935, and written by a spinster English teacher named Mary Rinn. She was the teacher in George Washington High School, NYC, who inspired my mother to continue her education. Miss Rinn was also mentioned as an important mentor by Dr. Harry Dillow, who also grew up in New York, but eventually found his way to the Canadian university where I currently teach, and where I started out as his grad-student teaching assistant. What are the chances?

Sifting through my parents’ books and papers after their deaths in 2009 was like digging for ancient treasure. I hadn’t known that Miss Rinn wrote a book until I found it in the pile. I also found other items that I hadn’t known my parents had, as well as books I had given them, which have now come home to my library. The magic of words only seems to grow stronger over time.
-----------------------
Posted by Jean Roberta at 4:00 AM