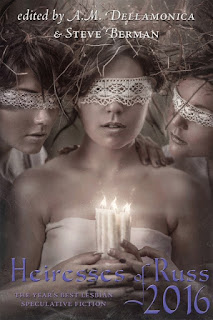 Heiresses of Russ 2016 is a best-of compilation of lesbian-flavoured speculative fiction stories which were published in 2015. The guest editor of this edition is “Alyx” (named for a character in the late Joanna Russ’ fiction) Dellamonica, who teaches writing at the University of Toronto in Canada and has won several awards for her own spec-fic. She is married to another award-winning female writer, Kelly Robson. It’s hard to imagine a writer who would be better-suited to co-edit this annual anthology with publisher Steve Berman.

As I suspected before I opened my review copy, several of the seventeen stories in this book originally appeared in the Lethe Press anthology Daughters of Frankenstein: Mad Lesbian Scientists, which I reviewed earlier. This book contains introductory material about the history of science fiction by women AND of actual female scientists, some of whom were theorizing about the universe much earlier than you would probably guess, unless you have studied the subject in depth.

(At this point, I could go into a long riff about the erasure of women from history, but that’s been done, and I’d like to reserve some steam for another issue that I’ll bring up later on.)

One of the stories from Daughters of Frankenstein (“Doubt the Sun” by Faith Mudge) is about an advanced robot or artificial intelligence, which is one of the themes in that collection. Another of these stories (“Love in the Time of Markov Processes” by Megan Arkenberg) is about a kind of hermit-scientist who studies the ocean from an underwater lab, somewhat like Captain Nemo in Jules Verne’s Twenty Thousand Leagues Under the Sea. The third story from Daughters of Frankenstein (“Eldritch Brown Houses” by Claire Humphrey) is set in the witchy New England of H.P. Lovecraft.

Like the previous ones, this edition of Heiresses of Russ is a spellbinding read, but it is more eclectic than Daughters of Frankenstein and other themed collections of speculative fiction. “The Wollart Nymphs” by Melissa Scott (a writer of well-constructed plots) starts out suggesting that the “nymphs” (actually three ships) have supernatural capabilities, but the historical mystery surrounding them is resolved by a factual explanation.

At the opposite extreme of mystery and sci-fi stories are those that use characters from fairy and folk tales (monsters, talking animals, evil monarchs who control kingdoms by magic) in symbolic ways. In “Where Monsters Dance” by A. Merc Rustad, a young lesbian who is terrorized by her stepfather is taught to dance by a protective monster from a parallel realm where dancing destroys hatred.

Speculative fiction by women often deals with alternative (imaginary) ways of creating new humans, or humanoid beings, but surprisingly few of the ones I’ve read really tackle the political implications of the fact that humans who were born female (including some transmen) can get pregnant, while those who were born male cannot. The term “patriarchy” points to time-honoured attempts to keep reproduction in the hands of men by controlling women, especially those capable of breeding.

“The New Mother” by Eugene Fischer is a sci-fi story in Heiresses of Russ 2016 about that very thing. The science part is based on the fact that conception in several species, including humans, is actually triggered by the pricking of the mother’s egg rather than by the addition of a father’s DNA per se. (Presumably the mixing of two sets of genes to produce a new individual is an evolutionary development.) In this story, a virus which is transmitted by males to females causes women to conceive during ovulation (the release of an egg from an ovary), and the results are baby girls who are genetically identical to their mothers. Virus-infected women can no longer be impregnated by men.

Giving birth to girl after girl, all looking exactly like oneself, does not seem empowering to the unfortunate women infected by the virus, as it wouldn’t in real life. However, this phenomenon seems very threatening to men who don’t want their whole gender to become a genetic dead-end, as it would in real life. In the story, a lesbian journalist follows the trail of the virus. To add to her anxiety, she is pregnant by an anonymous sperm donor. Like a sexually-active gay man in the early 1980s, the protagonist in this story can’t be sure she is virus-free.

Although this story is definitely speculative rather than strictly realistic, it undercuts a currently-fashionable kind of queer theory that gender (however defined) is either a strictly personal choice, or at least a socially-determined set of characteristics with no real connection to biology. In biographical descriptions, various individuals now define themselves as “non-binary” and “gender-queer.” Since speculative fiction plays with imaginary spinoffs from reality as we know it, it provides a welcoming setting for androgynous characters who have floated free from binary classifications of all kinds.

As exhilarating as it can be to imagine that we are all living in a post-binary world, it just ain’t so. Young women are still afraid of the possibilities that scared me when I was young and fertile: I could be impregnated without my consent (possibly through rape), and I might not be able to get a safe, legal abortion--or I might not want to destroy the strange, tadpole-like being inside me. After giving birth, I might have trouble earning enough money to support myself and my child and to ensure that the baby would be cared for if I had to work outside the home.

I knew that I couldn’t rely on any man, including the biological father of my child, to help us survive. As I found out, none of the legal mechanisms of Western society (including marriage) really force fathers to accept responsibility for “their” children.

As far as I can tell, young women (including non-heterosexuals) still have reason to worry about these possibilities, and young men of all sexual orientations do not. Although I could say that menopause brought me “beyond” the reproductive binary so that I can be as sexually carefree as a male, the binary hasn’t been wished out of existence.

Now that Donald Trump is President of the U.S., and he is in touch with other right-wing politicians all over the world, reproductive rights for women are being threatened, as they always are when patriarchy objects to freedom of choice. At such times, speculative fiction can enable us to escape momentarily from grim reality and give us hope, but we can’t really live in another dimension or in perfectly invulnerable bodies just yet.
--------