To date I’ve written four sci fi stories. The first was in response to an invitation to contribute to an anthology. It never sold that well but was fun to do and writing the story I realised that in the sci fi genre pretty much anything goes. It’s the very definition of world-building and I included some seriously weird science in my hot little tale.

I wrote a couple of full length novels after that, the fairly familiar trope of captive/hunter/disciplinarian. They did OK, and included more of the surreal science which so intrigues me. I found I’d become quite good at dreaming up alternative realities. Sci fi gives my imagination more of a workout than either contemporary or historical because it has no need to be rooted in anything factual or accurate. The normal laws of physics can be disregarded or re-written, as can any less than helpful social conventions. Spanking is fine, smiled upon, even. Harsh justice is the norm set within, dictatorial, dystopian communities and drawing on totally new moral codes. No wonder the sex is explosive.

My most recent foray into the sci fi arena was my contribution to the current anthology Alien Alphas. In a previous blog I mentioned the tactic of hitting one of those coveted lists by banding together with other authors, writing an anthology, promoting the bejabers out of it and selling it for 99 cents. We did all of that with Alien Alphas, and lo and behold found ourselves on last week’s USA Today bestsellers list at #30.

Naturally I was pleased with myself and after dancing around the kitchen table a time or two I pointed the list out to my bemused family. After the derisive snorts of ‘what, only number 30…? had died away my daughter asked about the subject matter. She was horrified at the concept of inter-species sex, likened it to some form of bestiality. I must admit, and perhaps I’ve become jaded over the years, but such niceties entirely escaped me. And after all, it’s only a bloody story, not a manual.

Anyway, by way of celebrating the success of Alien Alphas, here’s an excerpt from my story in the set, The Enforcer. 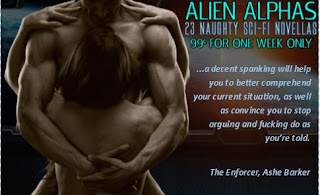 “Erin, you have no choice.” His voice had hardened now and Erin forced herself to meet his steely gaze. He was angry, or should that be irritated? But even so he was a handsome devil. He always had been, she would admit as much although her innate attraction to the Ymirian was something she had successfully quashed throughout her entire acquaintance with him. She did not fraternize with aliens, and most decidedly not with convicts in her keeping. Such behavior would be wholly inappropriate at Amalthea II, and hardly less so now.

Despite her resolve she was unable to break his intent gaze. His hair was dark and worn to shoulder length. All Ymirians were tall, their bodies muscular, and their physical strength was well known but Ramone surpassed even the norm for his species. She knew him to be physically fit and healthy, the checks made when he entered her facility had established as much, but close up the truth of those bald facts was even more virulently evident.

He flexed his jaw as though at pains to retain his temper. Erin held her ground, determined not to allow him to intimidate her. Xyker Ramone was an imposing male, but this was her ship. And he was supposed to be her prisoner. She made another attempt to assert her authority.

“Xyker Ramone, I must insist—”

“Erin, just do as you’re fucking told. Place your palm on the sensor pad and authorize the coordinates that Zeke is about to transmit.”

“Unless you prefer to spend a very uncomfortable few minutes over my knee with your bottom bared, I suggest you do as I say. I’m happy to start your correction now rather than on the planet and a decent spanking will help you to better comprehend your current situation, as well as convince you to stop arguing and fucking do as you’re told.”

Erin gaped at him. Surely, she had misunderstood. He hadn’t actually threatened to spank her. Had he?

“So, which is it? Your palm on the sensor or mine on your delectable bottom? I’ll count to five, then the choice is no longer yours.”

“Ramone!” She made to get up out of the seat but he prevented that with a stern shake of his head.

Erin clenched her buttocks and fought to disregard the unwelcome tingling between her thighs.

“This is ridiculous. I insist that you—”

She started to shake her head.

“No! No, I mean yes. I’ll do it. I…” She leaned forward to extend her right hand onto the sensor plate.