When My Husband Met My Master - #awkwardness #jealousy #polyamory 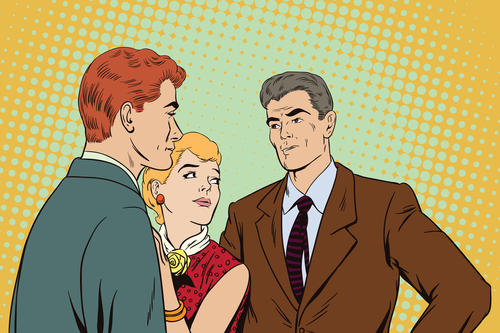 I’ve always been susceptible to the myth of the one true soul mate. How seductive it is to think that your perfect partner exists somewhere out in the world, the one person with whom you can connect on every level— physical, mental and spiritual. All you need to do is find him (or her). I understand the sweet ache for that unique individual who complements, completes and fulfills you.

In reality, I believe I’m constitutionally non-monogamous. I have no difficulty whatsoever being deeply in love with more than one person simultaneously. During one period in my life, I had ongoing serious relationships with three men. By serious, I mean that the connection went well beyond recreational sex. I was sincere when I told each of them that I loved him. Somehow I’d managed the trick of concentrating on the lover who was present, dismissing the others from my mind.

What happens, though, when two of your soul mates collide?

However, our relationship was never easy. We broke up at least partly due to misunderstandings about what each of us wanted. At the same time, the bonds between us remained strong.

Meanwhile, I met and married my husband, a man with whom everything was easy. Our life together began with a three week cross-country road trip, from the East Coast to the West. Travel can put serious strains on a relationship, especially when you don’t know someone well. In our case, it was a dream voyage, a fantastic adventure. We were so comfortable with one another, it seemed we’d been together forever instead of a few days.

Obviously he was my soul mate.

Time and life choices put significant distance between me and my Master. We didn’t see each other for years at a time, though we communicated by mail, email and the occasional phone call. When my path took me to his area, though, I always tried to arrange a meeting. A brief few hours—lunch, a walk in the park, maybe a bit of hanky panky—simultaneously frustrating and thrilling—then I’d return to my husband, grateful for his steady love and easy-going personality, as well as his tolerance of my attachment to my old lover.

On one such visit, though, I had the idea of introducing them. In fact, we arranged to have dinner together—my Master (“G”), my husband and me. To provide a bit of social lubrication, G brought a female friend, Mary. I thought the two men would trust each other more if they’d met. After all, they both loved me, and I felt the same about them. Furthermore, they had other things in common, besides me: high intelligence, interest in things technical, liberal political views.

That dinner may have been the most awkward night of my life. No one threw a tantrum, but the men were barely civil to one another. Mary’s somewhat sarcastic nature, and the fact that she knew a lot about my relationship with G, didn’t help things. Despite my desire to reassure them, to let each of them know how much I loved him, each man saw a rival in the other. Afterward, my husband claimed that G had explicitly threatened to steal me away from him. (I certainly didn’t hear him say anything like this.) Meanwhile, in our later conversations, G mocked my husband, telling me that he was too vanilla to ever satisfy me.

Every time I remember that meeting, I cringe. I may have done more harm than good, giving each of them a concrete target for their jealousy and insecurity. I’d thought we’d all be more comfortable, getting things out in the open. I even fantasized about making love to both of them at the same time.

Not bloody likely, as it turned out. After that fateful dinner, it became even more difficult for me to justify the occasional meetings with G, because I knew how much my husband disapproved of him.

Being a writer, though, I did manage to fulfill that fantasy, if only in a story. Truce of Trust was inspired by my relationships with these two soul mates. In that tale, the two men agree to live together with the woman they both love. However that doesn’t solve the problem of jealousy: 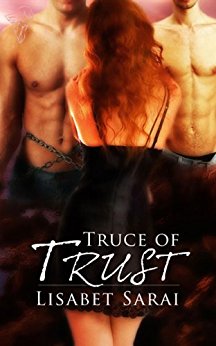 Greg stirred in his chair. “It’s late, and I’ve got to work tomorrow. Finish your wine, Leah, and come to bed.”

Daniel looked up abruptly. “Wait a minute. Tonight’s my night.”

“No, it’s not. Mondays, Wednesdays and Fridays she’s with me. In case you’ve forgotten, this is Friday.”

“That’s not fair. She was away last night at her seminar. So she and I should be together tonight as compensation.”

“Sorry, old man.” Daniel was three years older than Greg, who liked to rub that in. “You know that’s not how the system works.”

“Well, perhaps we need to consider changing the system. Somehow it always seems to work out that Leah is away from the house on my nights.”

“Please...” Leah rose from her chair, trying to intervene, but it was as though she wasn’t there.

“I’m sorry, but that’s not my problem. Anyway, you shouldn’t be such a bad sport. After all, you had her to yourself for years.”

Daniel snorted in exaggerated disgust. “To myself? Hardly! I couldn’t make love to her without wondering if she was fantasizing about you. I couldn’t look at her without seeing the marks that you had left.”

“Marks she asked for, don’t forget.”

“Believe me, I can make her beg to be beaten,” Greg said smugly. “Isn’t that true, little one?”

Leah blushed fiercely, as embarrassed as she was angry. Of course, Daniel knew this about her, but still she didn’t want to admit it out loud.

Both of them stared at her in mute accusation.

“Answer me, Leah.” Greg put a hint of steel in his voice. Shivers of anticipation raced through her in response. Her deepest instinct was to obey him, but she resisted, silent and rebellious.

“Why do you put up with him?” Daniel donned his wounded boy expression, pouting under his moustache. “All he does is hurt you. He has no respect for you. I can give you all the love and tenderness that you need.”

“You have no idea what she really needs,” said Greg softly. His aim was true, as always.

Daniel slumped in momentary defeat, then roused himself. “If that’s so, then why did she marry me?” he asked, playing his own trump card.

Leah had heard it all before, and suddenly, she couldn’t take anymore. She turned her back on them and headed for her room, ignoring their voices calling after her.

In the story, of course, the men realize they have to trust one another and truly share Leah, or they’ll both lose her.

In real life, things haven’t been that simple. But I haven’t given up hope. I’ve naturally optimistic as well as polyamorous.