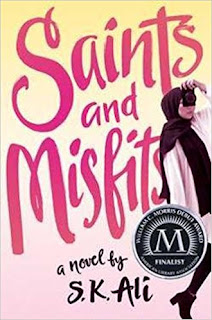 This book hits many of the common YA themes--coming of age, friendships, navigating family relationships and crushes. But at its core, it’s about how the main character deals with the aftermath of an attempted rape, both as far as how it affects her feelings and attitudes and as far as she navigates the boy’s presence in her community and among her friends.

As serious as that subject is, the book was also fun to read. The main character’s world is well described, both familiar and unfamiliar to me. She’s a typical American teenager, but her cultural and religious background (Muslim) introduce different issues from what I experienced myself growing up. The theme of saints and misfits touches on common questions in YA about fitting in, and it also points to the complexities of what it means to be a good person, what it means to “do the right thing,” and how that interacts with appearing to do the right thing.

I particularly loved that the main character navigates a bunch of complicated relationships with other girls in her life. For example, she starts out the book irritated by the seemingly perfect “Saint Sarah,” but finds common ground with her by the end. The snappish Sausun becomes both a friend and a foil--I don’t want to say too much about that particular subplot because it’s both surprising and fantastic. And the main character’s longtime friend Tats is drawn with a sense for the affection and conflict between them, as well as ultimate sweetness and true devotion.

The reason the book will really stay with me, though, is the way the main character’s feelings about the attempted rape are portrayed. All too often, I see simplistic treatments where rape makes people angry and gives them a desire for revenge. That’s never rung true for me. In my own experiences with sexual abuse and violence, I’ve found myself mired in self-loathing and denial, sadness and loss. I’ve wanted to be understood or comforted or acknowledged. It’s never really been a thing for me to wish for pain for the perpetrator or to desire vengeance. I don’t think that’s about being saintly myself, I think it’s that it just doesn’t feel useful. It doesn’t feel like it would give me anything at all.

In Saints and Misfits, I can identify with the way the main character feels about what happened to her. The arc of the book isn’t about revenge. It’s about the sense of pollution she feels and what it takes for her to stop claiming that sense of pollution for herself, and to see that it belongs to the perpetrator rather than her. When she feels angry, she often takes that feeling out on a third party, which feels true to me as well.

The theme is heavy, but the resolution felt satisfying and optimistic without being saccharine, unrealistic, or uplifting in a cheesy way. I’ll be looking for more from S.K. Ali for sure.

Posted by Annabeth Leong at 3:36 PM