Hi everyone! I’m K D Grace. I’m very honored to have the opportunity to write for Oh Get a Grip. BTW, the respectedbit in the title of my post is my neurotic effort to boost my self-confidence because I’m the new girl on the blog, taking over for Willsin Rowe. Big shoes to fill much??? I’m sure you can see why I’m a little bit nervous.

Honestly, I never much thought of myself as a fan girl. Oh, I’ve often imagined what happens to characters in my stories after the obligatory 80K with an HEA. I’ve even written subsequent novels about some of my more interesting secondary characters. While I’ve imagined, at the end of a really good read, what might happen next, I’ve never even thought about writing fan fic for books, or films, I love. But, oh Gawd! In my head I am SO imagining fan fic for Naomi Novik’s absolutely stunning Temeraire series. 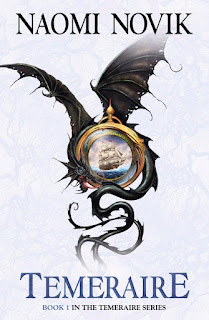 highly intelligent dragons who talk. At first the talking bit took me by surprise, but now I can’t imagine reading a story involving dragons who don’t talk, because it would appear, dragons have quite a lot to say, and I have a burning desire to listen in.

I’ve always thought dragons got a bum rap in Western literature. But beyond that, I never gave them much consideration until I watched Game of Thrones and fell in love with the Mother of Dragons like almost everyone else on the planet. But how could I not fan girl over a free-thinking polyglot of a Celestial Dragon whose favorite book is Pricipia Mathematica. This extraordinary beast enjoys Chinese poetry, is a foodie at heart, and has a love hate relationship with a fire-breathing Kazalik dragon whose name means “little Sparkle?”

It all starts when British Navy captain, Will Laurence’s, ship captures a French frigate carrying a rare dragon egg, which is about to hatch. There’s a shortage of dragons in England at the time, and with a war going on, they are desperately needed. However it’s a common belief that dragons must agree to be harnessed as soon as they hatch or they become feral and uncontrollable. With weeks to sail to the next port and the hatching imminent, one of his crew will have to attempt the harnessing. But when the blessed event occurs, much to Laurence’s dismay, the dragon chooses him. In a matter of minutes, Will Laurence’s hard fought for career in the navy is over, and he finds himself the chosen companion, and captain, to the young dragon, Temeraire. Their strange bonding is the beginning of an extraordinary friendship and a journey that shatters Laurence’s orderly, respectable life, and alters the course of England’s history.
Dragons are not the sidekicks in this series. They take center stage again and again, and rightly so. Novik has created a voice and a worldview for her dragons that is both alien and intriguing enough to makes me want to pull up a chair, have a cup of tea, and just sit and listen while they chat among themselves. Whether they are arguing mathematic or politics, planning battle strategies or financial strategies, whether they are gossiping about treasure or food or simply being overly protective of their captains, they are just fun to spend time with. There is a complete otherness in their society that is both unsettling and fascinating as, in the course of nine novels, they evolve from being the creatures humans most fear, and yet most need, into a world-changing, war changing, force that can no longer be marginalized. For me, one of the key ingredients in Temeraire and Laurence’s tale is that fascination with, and fear of, the “other,” which changes our perception of self.

“We are at least as able to control ourselves as you are,” one of the dragons in charge of training tells Laurence, concerning Temeraire’s sexual maturity. In one of my very favorite scenes, poor straight-laced Laurence realizes Temeraire has just masturbated while bathing in the lake, missing the affections of the lovely imperial dragon he has had to leave behind after visiting China. He asks, innocently if that isn’t how Laurence deals with being so far away from his lady love.

Novik is not afraid to kill off her characters and allow her readers to mourn their loss. It’s a time of war, after all. People, and dragons die. But what sets these novels apart for me is that Novik boldly deals with the messy, uncomfortable fears and doubts and ambiguities of human nature on a draconic scale. She is not afraid to let her characters – dragon and human – disappoint her readers, and each other, and then flounder about in their own neuroses of disappointing themselves. That means some passages are incredibly painful to read because it’s too easy to see my own flaws in gigantic proportion. But those flaws in a neurotic dragon with a heart as big as a house are incredibly endearing and somehow manage to give me hope.

One of the best parts of these novels is watching the wonderful interplay between the dragons and their human companions and seeing how that interaction makes their companions more human in the best possible way. Novik does this without taking away the wild savage otherness of the dragons while at the same time raising that wonderful question all writers and readers love to ask; just exactly who are the real monsters? Again and again the novels addresses this issue as the tale is played out against the backdrop of the Napoleonic War, in which campaigns are often commanded behind the lines by incompetent, power-grubbing, officers, and the politics of the day, just as now, are often brutal and self-serving. Novik’s novels are a tale of duty, our perception of it, and how far we are willing to go before our conscience will no longer allow us to confuse duty with blind obedience.

From a writer’s point of view, I would happily worship at the Temple of Naomi Novik. While the editing in the British version of the novels leaves a bit to be desired, the tale is gorgeously and brutally written. But best of all, Novik is a damn good story-teller. I heartily admit, I’m a fan girl! And while I may not write fan fic, I am happy to browse through the glorious body of Temeraire fan art and imagine in my head what happens next to my favourite characters – both dragon and human.
Posted by K D Grace at 7:00 AM

Email ThisBlogThis!Share to TwitterShare to FacebookShare to Pinterest
Labels: fan-girling on dragons