What Makes Us Human?

As luck would have it, I was driving home earlier today and wondering what to write for my post on OGG. There was an item on the radio featuring Peter Tatchell and his thoughts on what makes us human, and as I listened I thought, well, that's it..

For those who haven’t heard of Peter Tatchell, he’s a well-known and lifelong human rights activist known mainly for his campaigning on LBGT rights though his repertoire is a lot wider than that. In the opinion of Mr Tatchell., what makes us human is our propensity for protest. And, he goes on to argue, this is a Very Good Thing. I tend to agree.

Little in the way of social progress or enhanced rights and freedoms were ever freely given by those in power. Rather, they were won by the tireless and courageous struggles of campaigners such as Peter Tatchell who saw an injustice, something that needed to be put right so they stood up for themselves – and as often as not for a whole lot of others too.

I think perhaps my favourite stander-uppers were the Pankhursts. It is one hundred years this year since some women in the UK got the right to vote, and only because of the unswerving determination of the suffragettes. There had been women’s movements campaigning for political equality in the 19th century, but they were relatively quiet and peaceful about it. They were polite middle-class ladies. 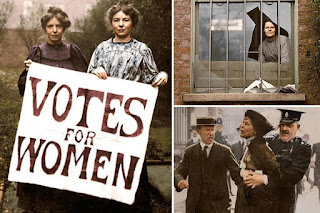 Not the Pankhursts and their ilk, though. These were still middle-class women, but they had an altogether more belligerent approach. They were downright stroppy, heckling politicians, breaking windows, chaining themselves to railings, slashing paintings, setting fire to buildings, throwing bombs and went on hunger strike when they were imprisoned. One suffragete, Emily Davison, ran out in front of the king’s horse during the 1913 Derby and was killed.

All of this civil disobedience eventually combined with the exigencies of the First World War which had the effect of escalating the importance of women’s contribution to running the country while the men went off to die in the trenches. The government gave in, and women over 30 got the same political rights as men. It wasn’t until 1928, though, that suffrage was extended to all citizens over 21. 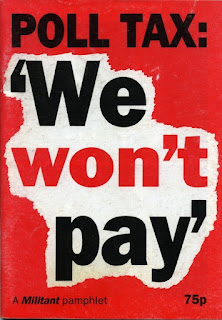 Mr Tatchell also mentioned another of my favourites, which I believe is linked to the votes for women movement. There was massive public protest in the UK in the 1980s when Margaret Thatcher tried to introduce her deeply unpopular new system of financing local government. The Poll Tax as it was known linked payment of a local tax to the right to vote and it caused outrage. I wonder if the memory of the struggles of the suffragettes still lives in many of us, certainly women, and any threat to that hard-won right was not to be tolerated. The people – including me - took to the streets in their hundreds of thousands. They refused to pay. They protested, and this flagship of Tory policy collapsed. The combined efforts of Her Majesty’s Opposition had failed to prevent this piece of nonsense becoming law, but people power saw it off within months.

I wonder if we are all sort of hard-wired to want things to be good, or at least better, and to reject what we don’t like. The pace of change can be slow, and obviously we differ in our opinions of what is good and desirable and what needs to change, but all of that leads to healthy debate. Peter Tatchell argues that nothing is more democratic than protest, and I think the freedom we have when we live in a country where any one of us can stick our hand  up and say ‘hey, that’s not right’  and live to tell the tale is not to be underestimated.