When does the mellowing begin?

I should have known it was a dream. This sort of thing never happens in real life: I was having a frank and honest discussion with my mother... about the menopause. And then I woke up.

Remember a few weeks ago I mentioned an elementary school teacher who told my mom not to worry too much about me, that life would round out the rough edges? Remember I said I'm still waiting for that to happen?

Well, I wish it would happen soon. I'm really getting sick of myself.

Summer came about three months early this year, and that's something most Canadians get excited about. Not me. Summer in the city means more people in the streets, more construction, more dirty-and-gritty.

In the summer, it is impossible for me to leave my house without getting into some sort of altercation. My sisters call me a New Yorker. My mom's afraid I'm going to get shot one of these days. It amazes me that nobody's thrown a punch. A few have come close, but I'm pretty sure I know what's stopped them: I'm five feet tall and I weigh 87 lbs. If you're bigger than that (and most people are) and you come at me swinging, nobody's going to be impressed.

I'd say I start at least 98% of the arguments I get involved in, with strangers on the street. In the sense that I speak first. Yell, usually. At drivers, at cyclists. I yell at them because they're breaking traffic laws and endangering my safety: failing to stop at STOP signs, driving through red lights, making illegal turns, driving on the sidewalk. I see this stuff literally every time I leave the house. So basically every time I set foot outside, my life is in danger.

You'd think after the attack last month, drivers would be more sensitive. But no. Pedestrian deaths in this city have skyrocketed over the past few years. It's bad.

So when people drive their cars or bicycles right-the-fuck at my body, you bet your ass they're going to hear what I think about that. I'm not impressed.

She was playing chicken with us. She wanted us out of her way, even though it's actually illegal for cyclists to ride on the sidewalk here. I've seen it so many times I can tell when people are playing this game, deliberately trying to scare other humans. That's what she was up to.

Don't fuck with me, lady. Seriously.

She was coming at me and this dude, and I was just like "Get off the sidewalk!"

The words were barely out of my mouth and already she was telling me to fuck off.

She won her game of chicken against me and the dude. What were we supposed to do? She was coming right at us. So I jumped off the sidewalk in one direction and the poor dude had to jump into the street.

The surveyors moved to protect their equipment, blocking it with their bodies so she wouldn't crash into it. That worked. She didn't tell them to fuck off, not that I could hear. She got off the sidewalk and went off looking for other pedestrians to harass, I guess.

I've been in this exact situation (minus they surveyors--that was new) more times than I can count. But here's what really scared me yesterday: I had this visceral reaction to being told to fuck off. I've been told to fuck off hundreds of times by hundreds of strangers, but yesterday... it wasn't even anger. It wasn't an emotion. It was this surge of primordial rage.

I wanted to bash in her skull.

I have one of those metal water bottles that's sort of club-shaped, if you can picture what I'm talking about. I just kept thinking how glad I was that my water bottle was in my bag and not in my hand, because if it had been in my hand I think I might have hit her with it. Hard.

When I told my girlfriend this story, she was like, "Good thing you didn't or you'd have landed yourself in jail." And I think she's right.

I've been thinking about why I feel it necessary to stand up for myself so loudly every time I feel even the slightest bit threatened. Stuff like this always seems to go back to what we learned in childhood, right?

When I was a child (and even into adulthood), I viewed my mother as weak because she allowed herself to be subjected to domestic violence in many forms. I didn't know about trans-generational trauma and stuff like that. All I knew was that my mom was weak and I didn't want to be like her. So I spoke up all the time. My mom told me I was too loud, so I got louder.

I learned another very valuable lesson in childhood, also from my mother (sort of), and that's that the police don't give two fucks about womenfolk. My mom called the police pretty often, when my dad was getting violent. Sometimes they showed up, but even when they did they were like "Don't worry your pretty head. Just let the man tire himself out. There's a good girl."

After my parents divorced, the violence escalated. Suddenly the threats weren't just against my mother, they were against us kids too. My dad would break into our house, bust up our shit. One time he broke in with a can of spray paint and wrote horrible things on our walls. It was... traumatic.

We went to the police. Oh so many times. The police did nothing.

So the lesson I learned in childhood was that you need to stand up for yourself because nobody else is going to do it for you. Especially not the police.

Last year one of the altercations I got into started exactly like the one above: cyclist mounted the sidewalk and rode straight at me. I was like "Get off the sidewalk," but this guy didn't just tell me to fuck off and go on his merry way. He jumped off his bike and came at me, started shouting at me, calling me a "mouthy bitch" and all this.

That day, I thought to myself: This is it. I'm going to get punched for sure this time.

I just kept walking in the other direction because, honestly, I didn't want to get punched. Maybe my diminutive stature worked in my favour, because the guy kept cussing me out but he didn't get physical. Finally, he picked up his bike and went off.

The reason I'm telling you this is because that whole incident happened in front of a cop. Seriously. A police officer was standing directly in front of us the whole time this guy was coming at me, and he didn't do a damn thing. I guess he was waiting for me to get punched. Maybe then he would have stepped in.

So now I'm stuck. I've been a "mouthy bitch" for nearly 40 years. Do I even want to change, at this point? I don't know. Not really. But I also don't want to be stressed and angry. I don't want to get in altercations all the time.

You're supposed to mellow as you get older, right? When is that going to happen for me? Because I'm thinking, with the impending menopause and all... won't that just ramp up my already substantial rage? I barely have control of my emotions as it is. If I get worse, Sweet's right--I'm going to wind up behind bars. As we've learned, cops are not my friend.

Listen to me: I'm expecting change to come at me from the outside in. If I really want to mellow, it's got to start with me. I need to make a choice. 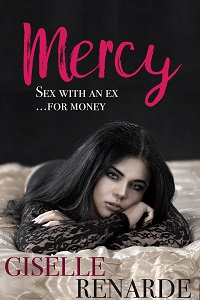 Tonight, I'm going to leave you with an announcement about a new book that's fully of angry, antagonistic, confrontational sex between a young woman and the man she used to date... who now pays her for sex.

It's called MERCY: Sex with an Ex for Money, and it's amply worth the $3.99 you'll pay for it. Five stories, four of which have appeared in anthologies over the past 12 years. The final story has never been seen by the public. I wrote it just for this collection.

Enjoy. If you have a secret soft spot for hate sex, I can pretty much guarantee that you will.

Posted by Giselle Renarde at 12:08 AM