Guys, it’s always been hard for me to stand up for myself. And I’m not sure what to say about that right now--it’s been a long couple of weeks. So I’m going to cop out a little and share an excerpt from my story, “Fast Pitcher,” in which my main character, Margie Underwood, does know how to stand up for herself. I wrote this during a time when I was listening to baseball on the radio just about daily, and I really loved playing around with how dirty baseball language sounds. :)

If you want to read the whole thing, “Fast Pitcher” appeared in Harley Easton’s Love of the Game anthology.

I’ll try to have more to say next time! 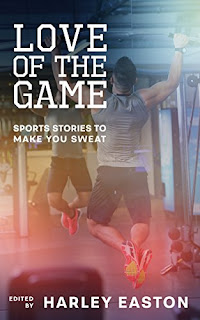 Phillips had stayed late too, eschewing the team's afterparty in order to participate in Margie's tête-à-tête with Pete Muñoz. She knew she needed a catcher, but part of her wished it could have been just the two of them.

She braced herself for more nonsense from Phillips as she stepped onto the field, but her pitch earlier that evening seemed to have made him a convert.

"I've got two bills down that you strike Muñoz out. He's lucky this isn't official, or you'd be messing up his precious over-.300 batting average," he said.

"Nah, man. Margie's good, but she's about to give it up to me. I think she's going to let me take her deep." Muñoz spat in the dirt at his feet, then squinted out at the empty park.

Margie squared her shoulders. She recognized Muñoz's trash talk for what it was — challenging, not sexist. He was chirping at her the way he would have with any hot pitcher. Telling her that she wouldn't be able to keep him from hitting long and hard, far out into the outfield or maybe even over the fences. When he hefted his bat, however, he glanced at her with meaning in his eyes. Margie's mouth went dry. It wasn't just the language that seemed sexual. Muñoz obviously planned to take her deep off the field even if he didn't manage the feat on the diamond.

She glanced from one man to the other, and heat gathered between her legs. The night was cool and clean, and she was drunk off the feeling of standing on a pro diamond and hanging out with men who played ball for a living as if she were one of them. Margie adjusted her baseball cap and raised an eyebrow at Muñoz.

"You boys can bet all you want, but neither of you is going to score off me unless I want you to."

Phillips let out a whistle. "You want to put your money where your mouth is, Underwood?"

Every line of his body was arrogant, but there was something appealing about him, too. His brand of cockiness looked like it could be a lot of fun. He was a big, strong man, thicker than Muñoz but no less cut.

She tossed her head. Her heart pounded so hard she could feel it in her throat.

"I'll do you one better," Margie said.

"How's that?" Both men spoke at once, their faces sharpening.

"Not that it's going to matter, but what's in it for you? What do you get if we can't hit?" Phillips grinned.

"Then you can tell everyone else on the team tomorrow that you struck out trying to get me to give it up."

She couldn't suppress a little surge of hope that the pitching coach would overhear, and one thing would lead to another.

"Fair enough." Muñoz laughed. "How many tries do we get?"

Margie tossed the ball into the air and caught it barehanded, pondering how lucky she felt tonight. She had that sense of fate and magic she'd become acquainted with in baseball, a sensation that sometimes came to her as she stepped onto the mound. It was a sort of full-body knowledge that resided outside of her head or heart or gut. It might have been written in the red stitches snaking over the surface of the ball, or perhaps it resided in her joints. Tonight, she was in control. She knew down to the tips of her toenails that tonight she could put the ball anywhere she damn well pleased.

"Three," she said. "You'll each have an inning to yourselves."

Phillips raised an eyebrow. "You sure about that? You haven't got any fielders to help you work around the hits."

"I'm not going to need them," Margie said, and even with the premonition she was having she had to work to summon confidence to her voice. "Neither of you is going to be able to touch me."

She knew what she was risking, but it didn't matter just then. She was good enough that she could make a serious contest out of this, even if they wound up besting her. She wanted to win for the glory, but the more she stared at Phillips and Muñoz, the more she thought she might enjoy losing for the pleasure.

Phillips started out catching, and Margie took her position on the mound and breathed a few times to steady herself. She was pitching to Pete Muñoz, listed by multiple sites as one of AAA's top prospects for the majors.

She struck him out swinging, and then she struck Phillips out looking.

"What's the record for a woman throwing fastballs?" Phillips muttered as the ball smacked into Muñoz's glove again and again. "I swear to God this has to be some sort of record."

"No one bothers to measure most of the time," Margie told him. "Ila Borders used to throw just over 80, but she's one of the only women who actually got a chance to play."

The conversation must have distracted her, and Muñoz hit a couple of fouls off of her before she managed to set her anger aside and return to that pure place of connection she’d had before. A screwball retired him a second time, and Phillips looked at two more pitches.

Phillips scowled, but her admonition made him marshal something. He stayed alive off fouls for a while, and then she threw a few outside, tying them up at a full count. He made her work for it, but she made him struggle just as hard, and the push-and-pull between them charged the air around him.

He brought his body closer to the plate than she would have liked, and Margie remembered that she needed to work him over a bit. She placed a couple pitches high and tight, forcing him to continue hitting fouls. When he backed away, she sent a beauty to the outer edge of the plate, just inside the strike zone but out of Phillips' reach.

Muñoz returned to the batter's box, new respect glittering in his eyes and his mouth curved upward with a smile.

"You said we wouldn't score off you unless you want us to. I guess the question is, do you?"

Margie ignored the question, winding up, knowing her speed alone could stop him. Muñoz swung on the heels of the pitch, but still a fraction of a second too slow. She glanced at Phillips and saw the lust in his eyes, but this night had become about more than an individual's desire. There was raw hunger between the three of them. Together, they could have eaten the world. Margie thought about what it would be like to step deeper into that mood, to tear into the two men with all her need.

Phillips tossed the ball back to her. Instead of winding up again, she let her glove fall off her hand and onto the mound. The ball fell beside it.

Muñoz waved his bat. "Then pitch to me. Let me take you deep."

Margie grinned and shook her head. "Nah. You can't touch the ball. I'm not giving you that satisfaction." She reached up for her hat and swept it off her head. "Satisfying myself, though... That's another story."

And if I'm going to self-promote, I'll go all in. Here's that link to the book again.
Posted by Annabeth Leong at 8:01 PM