Most women artists (including sculptors, writers, musicians, dancers, actors, etc.) whose names have come down to us from the past were faced with obstacles that men of the same race and class generally didn’t have to “overcome.” As Canadian politician Charlotte Whitton once famously said: “Women have to be twice as good to go half as far. Luckily, that isn’t difficult.”

Reading the lives of women and other “minority” or “disadvantaged” creators could give the reader the impression that there are two types of talented people: those who just give up and find something else to do, and those who transcend their circumstances. And supposedly, this amazing second group can be considered timeless and studied apart from their era and culture because, after all, they didn’t let any negative thing affect them.

The more I read this type of evaluation, the more I smell the manure.

Let's consider a woman artist of the Renaissance who was mentioned in social media recently. 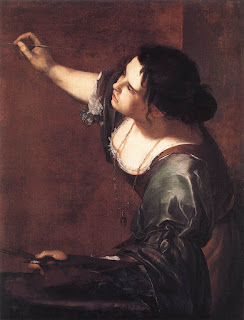 Artemisia Gentileschi (1593-1652?), who lived in Italy in the time of Caravaggio and Galileo, and painted for King Charles I of England, was briefly famous in her lifetime, then largely forgotten until Second Wave Feminism “rediscovered” her work in the 1970s. Since then, art historians have been finding and cataloguing her paintings, many of which were formerly attributed to her father, Orazio Gentileschi, or her various mentors.

Unfortunately, the best known event in her life is a rape trial of 1612, because the whole transcript has been preserved.

Here are the facts of her life, as far as I could find out from various biographical summaries: Artemisia was born in Rome to the painter Orazio and his wife, Prudentia Montone. Apparently no one knows much about Prudentia, except that she died when her only daughter, Artemisia, was twelve.

Young Artemisia showed considerable talent as a visual artist, and her father encouraged her in this, even though she was not taught how to read and write when she was a child. (Apparently she learned these things as an adult.)

At age 17, Artemisia produced her first signed painting, Susanna and the Elders. This is based on a Biblical story about a beautiful young woman who is sexually harassed and slandered after she refuses the male “elders” of her community. Notice the body language, which surely didn’t come only from Biblical sources. 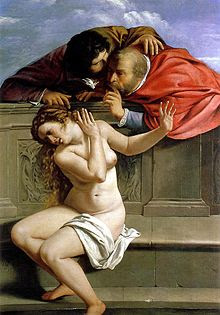 No art academy of the time would accept a female student, so Orazio arranged for Artemisia to study landscape painting under his friend, Agostino Tassi. This turned out to be a mistake.

After 18-year-old Artemisia had managed to avoid being alone with her mentor for some time, he cornered her in her bedroom and raped her. Apparently he continued “demanding her favours” and promised to marry her.

Artemisia told her father, Orazio, and he either charged Agostino with “rape” or with “breach of contract” because Agostino had deflowered Artemisia but hadn’t married her. As far as I could tell, this was a private lawsuit, not a criminal case (and I’m not familiar with secular law in Renaissance Italy.)

What seems crystal-clear is that the trial lasted for seven months and was probably more traumatic for Artemisia than the rape(s) itself. The judge ordered her to be examined by midwives and then tortured to make sure she was telling the truth. Agostino Tassi’s supporters testified in court that she was a “voracious whore,” or whatever words in Italian mean the same thing. Orazio responded by launching a separate suit for libel.

Agostino claimed he had not had sex with that woman, but his own associates testified that he had bragged about his “conquest” of Artemisia. He was actually convicted, and this might have had something to do with his track record. (He had formerly been charged with “incest” for getting his wife’s sister pregnant, and also for arranging the murder of his wife.) According to various sources, Agostino spent less than a year in prison and was banned from Rome, but came back a short time later.

During the trial, Artemisia was pregnant. One month after the conviction, she was married to a “family friend,” another painter named Pietro Antonio di Vincenzo Stiattesi, who was conveniently from the city of Florence, where both of them lived for awhile. (Clearly, Artemisia needed to get out of town.) In Florence, she gave birth to a daughter. A few years later, Artemisia was living apart from her husband, and was listed as “head” of a household that included her daughter and two servants. In 1616, she became an official member of the Academy of Design, which meant that a professional body must have changed its rules to accept a woman.

Artemisia lived in a time when painters could only survive through the patronage of rich and/or aristocratic buyers. In Florence, her patron was Grand Duke Cosimo II, who commissioned enough paintings from her that she could survive until his death in 1621.

Artemisia then moved to Genoa with her father. There, she gave birth to another daughter.

Some time between 1626 and 1630, she moved to Naples, probably because it was a larger city where she could more easily find patrons. In 1637, Artemisia was apparently trying to accumulate money for her older daughter’s wedding (and dowry?). She accepted a commission from King Charles of England to produce several paintings for the residence of his wife, Queen Henrietta Maria. Artemisia lived in England until 1641, when the English Civil War broke out. She returned to Naples, where she lived until her death in 1652 or 53.

There is no evidence of the cause of Artemisia’s death. Art historian Charles Moffat believes that she might have committed suicide, which could explain this lack of information.

According to several other art historians, the style of painting she preferred didn’t usually coincide with her patrons' taste, and this is a problem that has plagued artists for all time. (Now artists are under pressure to cater to current fashion as distinct from the taste of an individual.)

What stands out for me in this sketchy biography is that Agostino Tassi’s abuse and the resulting public scandal affected the rest of Artemisia’s life, although she was able to find powerful male patrons who admired her talent enough to pay her for her work. Did they also expect other services? If so, we’ll probably never know. Her first daughter seems to have been conceived in rape, and there is no evidence that Agostino Tassi ever provided financial support. So in some sense, Artemisia literally paid for what was done to her at age 18 for many years after that.

Why did she separate from her husband, Pietro Stiattesi? Wives rarely left their husbands in that time. Was she understandably reluctant to have sex with the man she had married for the sake of “appearances,” and did her refusal make him feel cheated? Or did he accuse her of being a “voracious whore?” Did he despise her baby by another man? Did she escape, or did he kick her out?

In what circumstances did she have her second daughter? Apparently she wasn’t married, so her pregnancy probably wasn’t planned. Was the father one of her patrons?

She was undeniably brilliant at what she did, and she did achieve recognition for it, but none of this shows that she “moved on” or “overcame” the long-term aftermath of being violated by a teacher she had reason to trust. Fame doesn’t erase trauma, nor have all famous women been considered respectable. Au contraire.

After her death, some raunchy little anonymous epitaphs surfaced. In one of these, Artemisia is accused of “putting horns” on her husband’s head (i.e. cheating on him). This is how someone remembered her when she was no longer alive to defend herself, not that anything she could say would have changed the minds of those who thought of her as a dirty joke.

Artemisia created some great paintings. In that sense, I would say she went above and beyond expectations. However, it doesn’t follow that she was less vulnerable to the values of her culture than any other woman of the time.