What an intriguing topic. I can’t wait to see what everyone comes up with. For my post I want to share an inspiring encounter from some years ago which found its way into one of my novels, Chameleon (2015)

As authors we’re often asked about inspiration for a particular story or character, and as often as not I find it quite difficult to pinpoint. Characters tend to be drawn from all over, a blend of people I do know and others I just made up. Scenarios are the same, often rooted in the familiar but not too specific. There are always libel laws to consider after all.

Chameleon was different though. The inspiration for the core concept came from an experience I had in Turkey about twenty five years ago. I was with a group of friends somewhere in Eastern Turkey, off the normal tourist beaten track. For some reason I can’t recall I was sitting on a wall in the shade of tree, all alone. I don’t recall where the rest of my group was – perhaps a mass trip to the loo. Turkish tummy can do that.

All around was arid desert. Not entirely unspoilt, there was a road heading off in both directions and our car was parked beside it, but not a soul to be seen. I was enjoying the solitude, scanning the far, dusty horizons and perhaps contemplating a dip in some hotel pool later on when a movement way in the distance caught my eye. Or perhaps it was something glinting, I’m not sure. As I looked though I saw a speck appear over the horizon, where the road met the sky. It grew bigger and became two specks. They grew, and I saw they were heads, the heads of a woman and a donkey.

The pair ambled into view, unhurried, shimmering in the distant heat haze. The woman was cloaked, completely covered against the sun. The donkey carried her, as well as a large basket on each side of the saddle. Together they swayed, perfectly in tune with each other, following the road across the desert.

As they came closer I could see more detail, the heavy, woven wool cloak, just a pair of sandals peeking from beneath. It was impossible to tell how old she was, though I had the impression she was young. She could have come straight from the set of Ben-Hur. It struck me that in some respects nothing much had changed here since biblical times.

She must have seen me at the same instant I saw her, so we had plenty of time to study each other as she made her steady way toward me. As she drew alongside she glanced at me, and we made eye contact. I nodded and raised a hand. She returned the greeting, then carried on her way. As I watched her retreating figure I wondered where else in the world two people from such different cultures and backgrounds could meet, cordially pass the time of day, neither one in the least surprised to see the other, both with a perfectly good reason to be alone in the middle of the desert that day.

For the purposes of my story the answer to that question was Morocco. Marrakesh to be exact, in the foothills of the Atlas mountains. The first contact between the lead characters is an almost exact retelling of my own encounter years earlier in Turkey. I thought it made the perfect opening scene between them.

Blurb:
A chance meeting, two strangers whose paths cross—in the same place at the same time, yet a world apart. 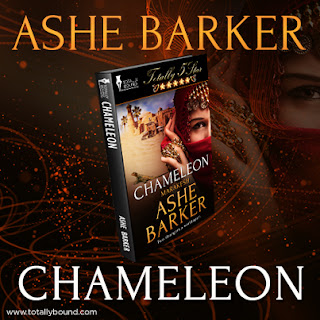 When mining engineer Ethan Savage spots the cloaked, veiled woman riding a donkey in the Moroccan desert, he can be forgiven for thinking that in some respects nothing much has changed in two thousand years. She wouldn’t look out of place in Biblical times. They pass, nod, smile politely and go their separate ways, two strangers a world apart.
But when, moments later, she rescues him from his crashed car, the first words she utters make Ethan realise that appearances can be deceptive. His little Berber peasant is not what she seems.
Shifting effortlessly between her traditional roots in the foothills of the Atlas Mountains and her professional life as the Totally Five Star hotel doctor, Fleur is a human chameleon, able to adapt and blend into any environment. At first irritated then amused by the handsome stranger, Fleur knows the assumptions he’s made about her. As their paths cross once more at the luxurious hotel, she realises he, too, is not all he seems. This sexy Englishman holds the key to her most secret and sensual desires, dangerous yearnings she’s kept locked away for years. Now she has a choice to make.
Ethan is only in Marrakesh for a few days, then he’ll be gone and she’ll never see him again. No one will ever know, so surely it will do no harm? Can she pass up this opportunity? And once she’s trusted him with her body, experienced all he can offer, will she be able to return to her old life? Or will the sensual chameleon need to reinvent herself once again to fit into his world?

Here’s the excerpt of that first meeting: 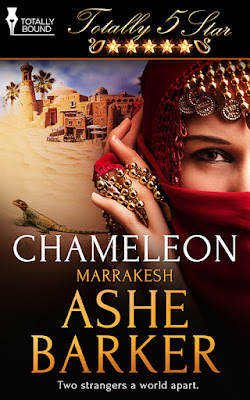 As he bent to place the bottle back in the car, something caught his eye. A glimmer, a slight tremble of motion in the distance. He squinted back along the road as it snaked away across the hillside, shading his eyes to focus. Something glinted, shimmered, right out there on the horizon. He walked around to the boot of his car, where his field equipment lay stowed, and opened it to grab his binoculars from his rucksack. He raised them to his eyes, adjusted the focus and blinked in surprise as the hazy vision solidified.
A head. A woman by the look of it, heavily cloaked, emerging slowly over the horizon. Her pace slow, sedate, rolling slightly. Ethan watched, puzzled, but soon understood the reason for the curious gait. Another head, this one grey with long ears pointing straight towards the heavens—a donkey. As they crested the hill, Ethan saw that the cloaked woman sat astride the animal, perfectly in tune with its leisurely pace as the beast ambled placidly along the ribbon of tarmac. Neither the woman nor her mount appeared to be in a hurry. As Ethan watched through his binoculars, a pair of shoulders appeared, also shrouded in a heavy cloak, the fabric enveloping her small figure. She didn’t appear to be guiding the donkey. She had tucked her hands inside the drapes of her clothing, perhaps for protection from the searing heat. Her feet, too, were swathed within the cloak. The ethnic details in the brightly coloured fabric crystallised as he watched. He suspected the multihued woollen fabric to be hand-woven. When the pair came fully into view, Ethan could make out panniers swaying on either side of the beast, one with a small, rolled up carpet peeking from it.
As they made their slow, unruffled progress down the road towards where he stood, Ethan dropped the binoculars onto the passenger seat, preferring to watch them with the naked eye. He stared, unashamed, as they drew nearer, taking in every detail of this pair, so incongruous almost anywhere else yet so perfectly placed here in this unchanging landscape. Ethan strolled to the rear of his car, resting his hip against the boot. He made no pretence of disinterest, not so much as a passing nod. His fascination was total.
The woman and donkey would not have looked out of place in Biblical times, and it struck Ethan that in many ways not much had changed here in over two thousand years—at least on the face of it. He watched as the woman reached up to rearrange her cloak slightly to cover most of her features, the traditional modest feminine gesture so common hereabouts. Now she gave off no clues at all, there was no way he could surmise what might lie hidden beneath the heavy shawl. Long minutes crawled past as the pair covered the distance separating them from Ethan. He regarded them solemnly during the whole of their journey.
At last, they were close enough for him to make eye contact. On impulse—and because it seemed impolite not to—Ethan removed his Ray-Bans and met the woman’s gaze. She looked him in the eye, direct, unafraid. And certainly not so much as hinting at the timid modesty he might have expected. Her eyes were dark, lined in the local kohl, but her Berber heritage was evident. Despite having no other clues to tempt him, Ethan found her eyes oddly beguiling. Intrigued, he would have liked to know her, to chat perhaps. But that would never happen, not here. In this magical, timeless place, worlds passed within inches of each other, beings such as she and he might co-exist, but their lives did not touch, would never touch. They were a million miles apart.
The woman and donkey drew alongside, and Ethan greeted her in the way that seemed natural to him. He nodded, offering her half a smile—polite, distant, acknowledging her presence in this remote place, and his. The woman inclined her head slightly, the movement almost imperceptible but enough. Just enough. As she passed, she dropped her gaze from his, returning her attention to the road in front of her as the donkey carried her onwards.
The innate submission in her response to him affected Ethan powerfully. His cock twitched and leapt to attention with a degree of enthusiasm that even he felt was unseemly in the circumstances. With his erection straining the front of his faded jeans, Ethan turned, following her with his eyes as she moved away from him, relieved that she could no longer see him, as the effect she’d had on him would have been difficult to conceal. From the back, she appeared even more mysterious, even more inscrutable—a small, still figure swaying gracefully with the motion of the donkey.
Ethan shook his head slightly, intrigued, mesmerised, though he couldn’t say why. Where else in the world could two people so different in every respect meet, pass each other, nod a greeting, neither one in the least surprised to see the other, and both with a perfectly good reason to be there?
What was it about the small woman that fascinated him? He knew nothing of her life, nor she of his. They would never meet again, and he doubted he’d even recognise her if they did. Still, he stood transfixed, watching as she slowly receded from his sight.