I wanted to share something that matched our current theme of “limits,” but on further consideration I think I’ve already use my most limit-stretching pieces here over the years. Like the one in “The Red Tent” where one character is blindfolded with wrists and ankles tied to the tent posts at the corners, while the other tells her that the cold steel being inserted where she’s warmest is an ice-climbing screw with sharp edges along the spirals cut into its tip. Edge play involves limits, right?

“Bright Angel” has plenty of kinky scenes, but my only excuse for connecting it with “limits” is what a young man, a beginning writer, said to me after a public  reading. “I didn’t know you could do that with erotica!” I forget what else he said, and I’m not quite clear what he meant, but my guess is that he’d only just then realized how unlimited the possibilities are.

So here goes, not quite from the beginning, and not quite to the end. 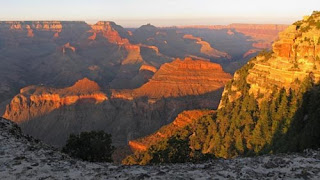 What follows, part way down the sides of the Grand Canyon, takes “edge play” literally, along with hyper-exhibitionism. If you want to read more, in a day or two I’ll post the whole story over on my blog, sacchi-green.blogspot.com. Or you could find it in my first collection, from way back in 2011, A Ride to Remember, a Lambda Finalist. And, as I said upstream, yet another Maura/Robie story will appear in my new collection coming out in March, from Dirt Road Books. Wouldn’t you like to see how many more ways I’ve explored the unlimited possibilities of erotica?