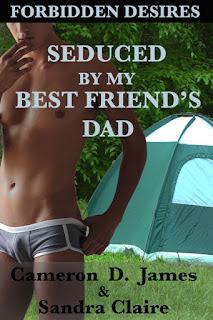 Given this month's theme of "pushing limits", I thought it appropriate to dig up my most limit-pushing novella -- and, perhaps unsurprisingly, one of my most popular. Readers love seeing those limits get pushed.

Seduced By My Best Friend's Dad

Jay has a crush on Richard, his best friend's dad. Richard is older, very masculine, cares about Jay, and is extremely sexy. There are just the problems of Richard being straight, married, and the father of Jay’s life-long best friend.

When Richard takes his son and Jay on a camping trip to celebrate turning eighteen, becoming men, and taking their first steps into the adult world, Jay struggles to contain his lust. Hitting on Richard would ruin the camping trip and destroy his friendship.

In this scene, about a third of the way into the book, Jay is hiking up a forested hill with Richard -- they're alone, as Jay's friend has taken ill and is sleeping it off in the tent. At the crest of the hill, they sit for some water and sunshine, but soon Richard's leg muscles start cramping from the hike. The erotic tension between the two men has been crackling between them like bolts of lightning -- and it only gets more intense when Richard asks Jay to massage his legs. When Jay gets on his knees in front of his best friend's dad, he discovers that the older man isn't wearing any underwear under those shorts.

Still not breaking eye contact with Richard, Jay willed his fingers back to life, massaging Richard’s upper thigh. With every squeeze of his fingers, he moved his hand half an inch closer to that patch of ball skin. With every passing moment, he felt the tension build in both of them, like he was waiting for Richard to call him a pervert or Richard was waiting for Jay to burst out laughing at the prank. But then his fingertips brushed against that warm, soft, wrinkled, hairy skin, and the tension deflated from both of them.

“Jay...” Richard said, his voice a mere whisper. It was filled with lust and need, happiness and contentment. He wanted this — needed this.

Jay brushed the skin, rubbing his fingers back and forth, then carefully worked his hand under Richard’s shorts and boxers. Soon he had one meaty ball rolling between his fingers. It was almost plum-sized, firm and round. He squeezed the ball lightly, tugged it gently, and Richard let out a low moan, falling back on his elbows on the rock, head cast back. Jay eased his other hand in the other pant leg and grabbed Richard’s other ball, giving it the same massage treatment. He rubbed both balls, smoothing out the skin, holding them firm in his grasp. The long bulge in the middle of the pile of fabric at Richard’s crotch twitched.

Shifting to grasp both balls in one hand, Jay slid his fingers reverently up the length of Richard’s cock, watching the man’s face for any reaction that this was going too far. But Richard was too far gone, too lost in the heat of the moment to ever say no — Jay knew he had Richard, that the man was putty in his hands, but that he had willingly and knowingly put himself there.

He still didn’t understand it — Richard was straight and married and the very fact that Jay was his son’s best friend should have put up some immediate boundaries, placed him off limits. But those boundaries were obviously being ignored. The almost father-son relationship they’d developed over the years also wasn’t a boundary that could stop them. If anything, that closeness only added to the intimacy of the moment. Jay was giving pleasure to the man he’d looked up to all these years.

Click here to find out where to get your copy.