Men in Uniform Anyone? 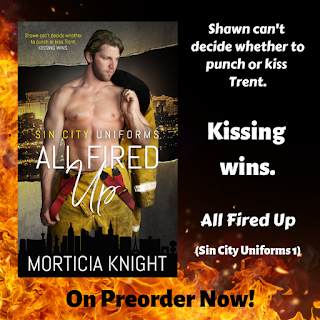 Shawn can’t decide whether he wants to punch or kiss Trent. Kissing wins.

The party never ends in Las Vegas, but neither does the danger. Shawn is the new foot patrol officer on the Strip and he’s ready to take on the town and keep the peace. Once he spots hunky firefighter Trent, Shawn wonders whether he can take him on too.

Trent is dedicated to his job, built tough and a no-nonsense man of few words. At a local blood drive, Trent eyes a handsome new officer but doesn’t dare get too close. After his boyfriend’s life was snatched away in the line of fire, he couldn’t bear the agony of such a loss again.

Trent’s over-protective instincts kick in during an emergency call and he embarrasses and angers Shawn in front of their fellow officers. Too late, he realizes he’s falling for the sexy man. But has he already destroyed any chance they might have at something more?

Once they spend time together away from the stresses of their jobs, they find they’re not just compatible – they’re combustible. However, right as their relationship deepens, the threat of terror escalates on the Strip. The underground vigilante group, the Citizens Against Immorality, have raised the stakes. Will Shawn and Trent be their next targets?

Publisher Note: This book has been revised and expanded from the original edition that was published under the same title at Totally Bound Publishing in September of 2014.