The Best Book You Haven't Read


Today I’d like to highlight one of my books that has everything the romantic mystery lover could want—“Lido Key” (Vic Fallon Book 2). There’s a rugged private eye who’s as quick with his fists as he is with his mouth, an intriguing plot, a sultry femme fatale with a few dirty secrets, exotic locations, and interesting supporting characters. This story has all of the classic gumshoe caper elements, reminiscent of Phillip Marlowe, Joe Mannix and Jim Rockford, but with liberal doses of hot sex. Think Mickey Spillane without boundaries.


“Vic Fallon has worked on some strange cases since he left the police force to become a private investigator, but when a former lover asks him to look into a bizarre blackmail demand, it’s one for his memoirs. Vic hasn’t seen Ariel Weston since his last trip to Siesta Key, Florida three years earlier. The end of their affair wasn’t amicable, and Vic swore that the next time he saw Ariel he’d drown her with the nearest Pina Colada. When she gets caught up in a potentially embarrassing sex scandal and appeals to him for help, Vic reluctantly agrees but finds himself in a real quandary when he realizes they still have feelings for each other. The case brings Vic in contact with a corrupt local cop, a famous writer with a taste for booze and women, and a sleazy strip club owner who knows more than he’s letting on. Throw in one very cute Latina who develops a crush on him and the case becomes more complex. Can Vic solve Ariel’s problem before the blackmailer ruins her life? Will Ariel convince Vic to give their failed relationship another chance?”


This post is titled “The Best Book You Haven’t Read” because when I released it a few years ago, I had high expectations. The first installment in the Fallon series, “The Bundle,” did very well commercially and critically, and I was hoping for an encore. To my continuing surprise, this one didn’t find an audience. I still don’t understand why.


I wanted to invoke the classic film noir crime caper in a contemporary setting. “Lido Key” has realistic atmosphere, fast-paced action, snappy dialogue, humor, well-drawn characters with hidden agendas, and some very intense coupling. There are two-fisted encounters with the bad guys, red herrings that may or may not impact the final showdown, and several “Gotcha!” moments. What more could you ask for? The pulp fiction style is evident from the opening paragraph, where Vic recalls a dream:


I had the craziest damn dream. I was standing on a cloud of white satin while angels strummed their golden harps all around me. I swear one of them looked like Taylor Swift. Then this guy showed up, dressed in a double-breasted blue pinstripe suit and a gray fedora. Looked like he stepped out of an old Bogart movie. No, it wasn’t Bogart, it was Robert Mitchum in ‘Farewell, My Lovely.’ I always liked that movie. Mitchum handed Taylor a bottle of cheap whiskey and she poured a healthy slug into a tumbler. She smiled when she handed it to me, you know, one of those smiles that tells you everything’s okay, even though your gut tells you it isn’t. I drank it then felt drowsy, so I fell asleep on that cloud. Probably shouldn’t have eaten Veal Scaloppini for dinner.


He opened his eyes then looked around the bedroom. His brow furrowed in confusion. This isn’t where I fell asleep last night.


This is probably the sleaziest concept I ever devised, which made it fun to write, and I threw in everything. Ariel is a former lap dancer who married into money, and she’s being blackmailed via secret photos taken at a swinger’s club while she’s enjoying partners of both sexes. The payoff doesn’t involve money, but something much more deviant. The owner of the club is heavily involved in the skin trade, the famous writer is mainly interested in the women his fame attracts, and the crooked cop has a thing for Ariel and doesn’t want Vic hanging around. And then there’s the Latina housekeeper, a former co-worker of Ariel’s from her dancing days. She’s attracted to Vic, but do she and Ariel enjoy a relationship that’s a lot more intimate than boss and employee? There is explicit sex, all in keeping with the plot. There’s also a lot of sensual flirting, such as this nighttime beach scene:


Ariel leaned over and kissed him. Vic placed his hand under her long mane of hair and massaged her neck while thrusting his tongue deep into her mouth. Ariel’s scent was natural and intoxicating, a hint of perfume mixing with her personal chemistry to arouse his senses and libido. The sound of the tide rushing onto the beach provided the perfect background music, bringing back memories of long-ago nights.


He pulled back slightly and peered into her eyes while playing with a strand of her hair. “You still know how to get to me.”


“That goes both ways. In fact, I’m going to let you in on a little secret—I don’t think anyone’s ever gotten to me quite like you do. Does that surprise you?”


“When we make love, you’re more interested in making me a part of it.”


“A lot of guys make me feel like I’m a spectator. You don’t.” She brushed his cheek. “To the victor go the spoils. Remember when I said that after we made love?”


“Uh-huh. Remember what I called you?”


She giggled. “Love Buns. I always thought it was cute.”


“Know why I called you that?” Ariel shook her head. Vic placed his hand on her ass and gave it a firm squeeze. “Because you have the cutest butt I’ve ever seen. It even looks good when you’re naked.”


She cupped his cheek. “Thank you. Want to take your canoe for a ride?”


She kissed him then whispered in his ear. “Take some Dramamine.”


If you like romantic private eye stories with some kick and kink, do yourself a favor and check out “Lido Key” at the link below. I think you’ll have a good time. 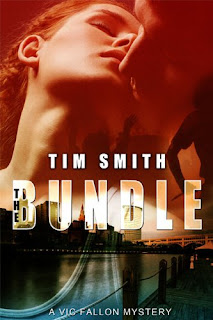