Pushing the Limits on Pole

When I learned that pushing the limits was this cycle’s blogging theme, my choice of subject was a no-brainer. I posted last year that I had begun pole dance training. Nineteen months in and pole is still absolutely, in every training session, and in more areas of my life than I’d have thought possible, pushing the limits. As I mentioned, I was fit when I began pole. Going to the gym started out as a way to help me cope with depression, but training quickly became the creative physical counterpart for the imaginative act of writing. That combination of creativity and physicality is what led me to pole. 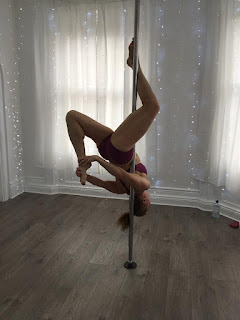 Oh yes, I was fit, and I STILL thought I was going to die! But the physical training of pole was just the beginning. At least once a month I thought about quitting. I thought that maybe I had actually tackled something I was too old to do. At least once a class I found myself scratching my head wondering how the hell I was going to manage a move that I couldn’t even get my brain around let alone my body. Don’t overthink it, they said. I didn’t listen.

And the bruises … well the bruises have been non-stop and in new places as I learn new moves. It’s an ongoing joke among my pole family as we wonder which bit of tender virgin flesh will succumb next, and what move will do the dastardly deed. So far the most unusual is a butt crack bruise due to a superman variation gone horribly wrong. Not mine, I’m very happy to say. But as you can see from the pic, do have a fair few. 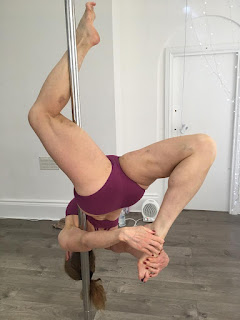 For nearly the first six months I came home exhausted, aching and battered. I went through a lot of ibuprofen during that time. There were gallons of Epsom salts baths and water bottles, and there was a lot of Pilates and training at the gym to strengthen and stretch and train balance and coordination. There was a lot of angst over coffee with my friend Viv, as we both doubted ourselves every week, and then went back to class every week and kept on training.

For six months, twice a week, I hurt like I’d never hurt even in my hardest gym sessions. But there was enough improvement that it was worth the pain, and I knew that a lot of that pain was just because I hadn’t quite mastered the techniques properly yet. Then nearly a year in, I injured a shoulder and had to give up training for six weeks. It would have been an ideal time to call it quits and convince myself that maybe I really was too old, maybe it really was too much for me. But in the end, I couldn’t let go when I’d made so much progress and come so far. I rested, I went to physio. I trained at the gym to strengthen and recondition the shoulder and it healed and got stronger. So, when the six weeks were up, I was back at pole class every Tuesday and Thursday. 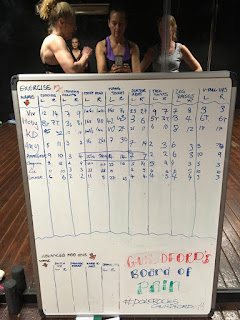 As I got stronger and more sure of myself, I added several mini workouts each week on my own pole, which dominates the workout area of our house. I won’t say that there’s no more pain. There’s just a whole lot less than there was, and I’m finally beginning to acquire the skills I need to get me to a higher level. A trainer once told me that our bodies are always fit for what they have to do. That’s why runners find long distance walking hard, that’s why people who train weights regularly find their first Pilates class so painful. That’s why someone who trains hard on kettle bells reaches for the ibuprofen when she starts training pole. My body is finally becoming properly fit for pole … or at least for the intermediate levels -- a goal in itself I wondered if I’d ever reach.

With pole, the battles aren’t always physical. One of the hardest things for me was the fact that as I advanced, it became necessary to take off more and more clothes. There’s a reason people who are good at pole don’t wear much, and it’s not because they look amazing. One of the key ingredients in any pole move beyond the basic spins is skin grip. It’s essential if you want to stay on the pole. The more complex the move, the more skin grip it often required. While my body is fit and healthy, it does not now, nor will it ever look twenty. But I soon discovered that many of the really amazing trainers, and students, have ordinary bodies, some are heavy, some are slim. There are women of all different body types doing pole, and they have one thing in common. They train hard and it shows. I was once again reminded that I train to encourage and nurture my body’s power. That power is inevitably connected to so much more than just my physical strength. And that training is an act of love and respect for myself. That made it easier to dress for the occasion. 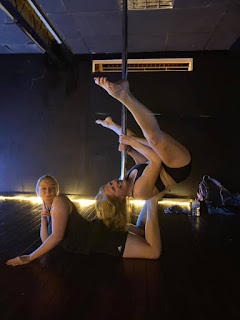 I’m the oldest person in the class by a good margin. There’s one woman who’s only six years younger than I am. The rest are in their twenties and thirties. But I’ve realized that we older women have two serious advantages. W’ve had a lot more time to get tough and wily. And we’ve got a lot less time to get good at pole than the younger women do. That means for me it’s always urgent. That means that my friend and I are often stronger than many of the younger women training at our level. The converse, however, is that our brains don’t pick up on new moves and combos quite as quickly.

As it turns out, the younger women are not only fine training with old farts, but they actually admire us, enjoy working with us, and the feeling is mutual. I love that we really have coalesced into a family. The joking is sometimes raunchy, there are sometimes tears, there are lots of hugs for comfort and encouragement, and there’s a lot of encouragement. And laughter. There’s a lot of laughter. All of those ingredients have kept me coming to pole class every Tuesday and Thursday for the past nineteen months, that and the fact that I fell in love with pole the very first bruising session I went to. That love has only deepened as my skills have. 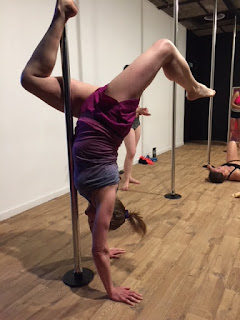 Today I’m attending my first ever workshop for pole. This one is actually open to intermediate level students –ish. The ones offered up until now haven’t been. I don’t mind saying I’m nervous. I know I’m throwing myself outside my comfort zone. Though in all honesty, I’ve been outside my comfort zone so many times since I started pole that being comfortable seems slightly strange.

I just turned sixty last month, and it wasn’t nearly as painful as I feared it might be. Pushing the limits has become less about my age and more about thinking in terms of what I want and what I can achieve. As it turns out, I can achieve a whole lot more than I ever imagined I could. 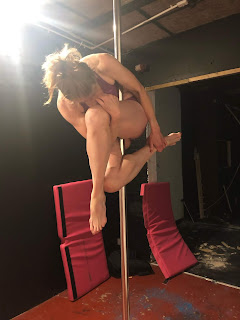 Email ThisBlogThis!Share to TwitterShare to FacebookShare to Pinterest
Labels: ' creativity and fitness