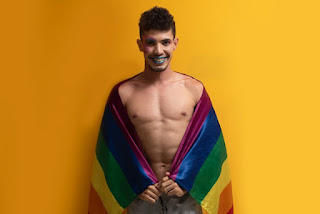 It’s hard to deny the allure of the gay nightclub.

It’s a place of sweaty, writhing bodies pressed close together. The men packed in there like sardines are a cornucopia of attractiveness; no matter what you’re into, there’s a man there for you. And the go-go boys… the go-go boys are the stuff of dreams. Attractive, perfect, seductive, and typically wearing a jockstrap with a perfect butt rounding out his rear.

Of course, that’s the fantasy of what those places are like. The reality will vary quite a bit from city to city and club to club. Locally, my clubs do not reflect the fantasy, though I don’t exactly visit them often.

But when we write, we write fantasies — at least in this genre.

In the LGBTQ+ community, gay nightclubs are an important part of our culture. It’s where you can go to meet people like you, which can be an important step in dating. As a gay man, it can be very hard to find other gay men in society at large because very few men go around wearing rainbows or other signals of their sexuality. One could argue that this function of nightclubs is being replaced by apps like Grindr and Tinder, but one could also argue that those apps lead more to hookups than dating, and often dating starts after meeting someone in person. (Almost all the gay men I know who are in relationships did not meet their partner on an app.)

Clubs are also a place where people can go and be themselves. If my husband and I were the clubbing type, I would never show signs of affection for him in a “straight” nightclub — but in a gay nightclub, I would feel comfortable showing such affection. Even in a progressive country like Canada and being frequent visitors of “safe spaces”, I still feel uncomfortable showing affection for him outside of the privacy of our home.

In many areas, nightclubs also offer a place of community. Celebrations like Pride bring the community together and work for visibility and equity, but Pride celebrations are often one week long in a 52-week year. Nightclubs might do less for visibility and equity, but they provide that same community every single week of the year. Clubs are where people often make friends, catch up with old acquaintances, and share important news within their friend networks.

Though I don’t do clubbing — and of the two gay clubs here in my city, I’ve been to only one of them once, and not during a busy time — I do recognize the allure, the symbolism, and the energy that these places represent.

When I write about clubs, which I’ve done in Go-Go Boys of Club 21 and New York Heat, I try to balance what we all want clubs to be and what we all know clubs are sometimes like. My fictional clubs are full of the ideal people (though a variety of them; they’re not all twinks and jocks), but sometimes the drama is a little more real — aggressive clubbers who can’t take no for an answer, bad breakups, and threats against safety. But even though there are splashes of reality and reality isn’t always pleasant, I try to ensure that characters and situations are given a happy ending, that we return to that fantasy. (With some exceptions in New York Heat.)

My characters need their nightclub. So, too, does the LGBTQ+ community.