When the pen really is mightier than the sword

My latest release is something of a slight departure for me - a historical, but without quite so much of the steaminess that my books usually wallow in. Wolfeheart is one of fifteen new novels connected to the world of the de Wolfe pack originally created by Kathryn Le Vecque. I'm already  amassive fan of her books, so when Ms Le Vecque put out a call a few months ago for other authors to write stories to connect to the world she had created I couldn't resist. And it gave me an opportunity to develop an idea I had been mulling over for a while. 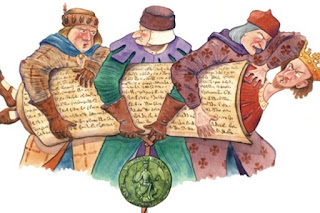 Wolfeheart is the story of Magna Carta (or how it might have been written), a turning point in English history. The great document, which set the foundations for the British constitution, was sealed by King John in 1215, and saw its 800th anniversary in 2015. To celebrate this landmark, the British Library brought the four remaining copies of Magna Carta together for a one-off exhibition and invited 1215 members of the public to attend the opening day. I was lucky enough to win two tickets to that event in an on-line raffle so I went along with my daughter. It was an unforgettable experience, and had to find its way into a book.

Passionate, sensual… medieval romance at its most breath-taking. Dark secrets, and a love that will transform a nation!

The fate of a nation hangs in the balance. Charged with a momentous task, the whole of England is relying on him. Richard de Wolfe will not contemplate failure, but what will be the true nature of the challenge before him?Jocelyn of Kirkstall is a woman born centuries ahead of her time. Educated and intelligent, her learning and skilled penmanship will be vital in curbing the excesses of a cruel monarch who will stop at nothing to prevent her completing her task. Can her powerful Wolfeheart warrior knight protect her when the king sends his deadly assassins on a murderous mission – to ensure Magna Carta never sees the light of day.If you enjoy sensual historical romance set against the glorious backdrop of a cornerstone of English history, you will not want to miss Wolfeheart, This latest page-turner from Ashe Barker charts the turbulent love story of an unworldly but fiercely intelligent young woman and the powerful knight determined to have her for his own. 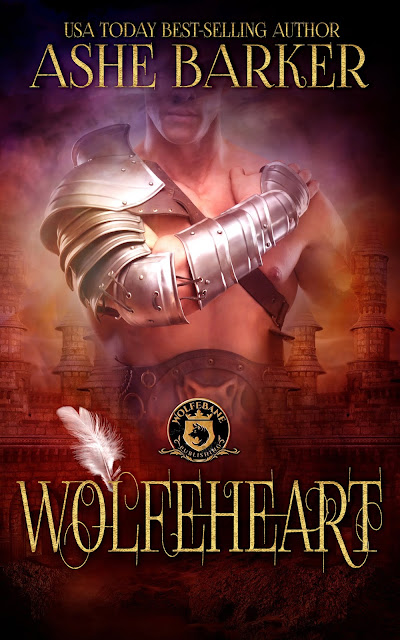 “I know you have a temper, and I expect the king does also. I… I would not wish you to come to harm because of me. I am no one…”
He laid the parchment he had been studying back on the table and came to sit beside her. “You are not no one. You are a woman of skill, knowledge, and courage, who has done a great service to your country.”
“I… I thank you. But even so, I would not wish you to evoke the king’s wrath on my behalf.”
“You care for me then?”
“Of course I do. As you cared for me and came in search for me. And for Eloise, of course.”
“Of course.” He smiled at her. “But mainly for you.”
“Do not say that.”
“I care for Eloise. She is my liege’s only daughter and heir and I would have come to her aid without hesitation. But that is a far cry from the desolation and despair I felt when I believed you to be trapped in that inferno. I was near enough driven to distraction, fearing for your life. I thought I had lost you.”
Desolation? Despair?
“You should—”
“Yes, I should.” His lips sealed hers before she could utter another word.
His lips were soft, yet demanding, teasing and tantalising. He leaned over her, then reached beneath her to sweep her into his arms. Jocelyn grabbed him around the neck and clung on as he strode to the bed.
He laid her down, then stretched out alongside her, propped on one elbow. She managed a tremulous smile.
“Are you…? I mean, do you intend to…to…make love to me?” Was that the correct thing to say? Should she even have asked?
His nostrils flared, and his eyes darkened. He appeared not to be displeased at her artless questioning, but she could not be certain. She was sure of nothing in this moment. Jocelyn could only lie there, gazing up at him, wondering what came next.
Fear, curiosity, desire—all warred within her. Somewhere deep in the pit of her stomach, an unfamiliar sensation unfurled and began to open, to stretch and grow and make itself known.
Desire. She recognised the yearning within herself, the wanting, though she could not name that which she longed for, the urge to explore and to discover. It was a powerful compulsion which demanded that it be sated.
Lust.
A sin, she knew. The brothers at Kirkstall were very clear on this matter. But she harboured and rejoiced in the heady sensation anyway, let it grow and take form, and it did not seem to her in the least bit wicked.
“Yes, if you will allow it. If you want it, too.”
She had to think for a moment to recall her question. She did, and she answered him. “I do.” The response came quickly, too fast, but she did not want time to think, to consider, to regain control over the roiling sensations suddenly flooding her body. “I want you, Wolfeheart.”
“Then you shall have me.”