To All the Wives I've Wronged Before

I sometimes wonder when my misdeeds will catch up with me.

You know how I love all these true ghost story shows on TV? (Sure you do.) Well, sometimes you'll come across an episode involving demonic infestation. You don't just have a ghost in your house. You've got a full-on demon. It's a dangerous situation.

Sometimes the paranormal investigators will be able to pinpoint the moment the homeowner might have opened the door to this demon, and often that event occurred YEARS prior. The homeowner will be baffled by this. How come so many years--decades, even--went by before this demon ever showed its face?

The paranormal experts usually say that a demon will lie in wait until you're happy. Married to the perfect person? Great job? Cute kids and/or pets climbing all over you? That's the time a demon will choose to attack. Because they seek to destroy happiness.

If you know that I like ghost shows, you also know that I've been involved in my share of adulterous relationships. Seeing that life is irony, it wouldn't at all surprise me if someone's wife came at me after all this time.

A few years ago, an ex told me he was pretty sure his wife had stumbled upon the emails we'd sent each other when we were involved in an adulterous relationship. He said, "If I know her, she didn't just read one--she read them all." But these people do not talk to each other, so if she did read that series of emails (a string that started twenty years ago and ended almost a decade later), she never confronted her husband about it.

And she never confronted me.

So it's possible there's a wife out there who knows every nitty gritty detail of my affair with her husband (at least, all the details captured by email) and she's just sitting on that information. What would need to happen--in her life or in mine--for her to come after me? Would she lash out? How?

The wives of the married people I've slept with have always been kind, good-natured individuals. I can't imagine any of them coming at me with a rifle--except that I can imagine that scenario, and I've imagined it many times--but you never know what might happen. The fantasy, and one I've written about more than once, is that she comes at me and I'm like, "Well, I can sleep with you, too. It's only fair!" and great sex ensues.

It's possible that only happens in erotica. But it's a preferable fantasy to being slaughtered by wives. 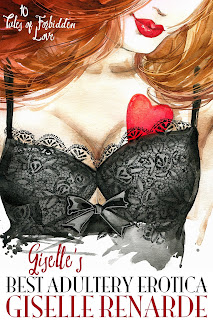