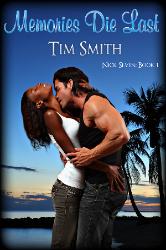 By Tim Smith
One of the members of my writer’s group made an interesting observation. We were discussing marketing and she commented that I wasn’t focusing enough attention on my extensive backlist. I have 22 books out, and realized she was right. I tend to focus my efforts on the newest one, but I shouldn’t ignore the other kids in the family. In that spirit, I’m going to use this opportunity to feature an oldie but goodie.
I’ll start with the first in my Nick Seven spy thriller series, “Memories Die Last.” This was actually the first book I ever had published. Several years after its release, followed by two sequels, I changed publishers and got the rights returned to me. I had written a few other books for my new publisher, but when I re-read this one, I knew I could do it better as a reboot. I rewrote the entire thing, keeping only the title and basic plot. It did even better than the first time around when it was introduced to a new audience, and kicked off what has been my most popular series. I’m releasing book number six in that series later this year.
“What happens when your life is turned inside out by something from your past that won’t leave you alone? Former CIA operative Nick Seven finds out when his peaceful life in the Florida Keys is disrupted by the appearance of an old nemesis he thought was buried alongside the painful memory of a personal tragedy. Nick reluctantly gets back into the spy game to settle an old score and is pleasantly surprised to find himself paired with beautiful Felicia Hagens, a former co-worker from Barbados. Together they uncover a complex maze of intrigue, espionage and high-level government corruption. The assignment gets more complicated when they realize they have unrequited feelings for each other. Can Nick finally hit the elusive target and reclaim his personal corner of paradise? Will Felicia return to Barbados or stay with the rugged former spy she’s always had a secret thing for?”
When I devised the character of Nick, I needed a place for him to call home. I had visited the Florida Keys and thought if I were a former spy who wanted to hide in plain sight, that’s where I’d go. An interesting side note is how I came up with the title. The story revolves around Nick having to face an unpleasant memory, and coming to grips with it so he can move on with his life. I had chosen a different title but at the last minute, I did a search and discovered that it had already been used more than once. Then I remembered a book by Harold Robbins that I enjoyed, “Dreams Die First.” I thought “If dreams die first, maybe memories die last.” Problem solved. Here’s an excerpt:
Felicia took a drink then set her glass on the table. “You know what your trouble is? You think too much. You’re not jinxed, there’s no black cloud hangin’ over your head and your luck’s not runnin’ out. You’re just stuck on somethin’ and your brain’s runnin’ loco because of it. You’ll figure this one out like you always do.” She stood then held out her hand. “Come on, you need some sleep.”
Nick smiled slyly. “What if I’m not sleepy?”
She returned his look. “Maybe you need some exercise to make you tired.”
“Too late to go to the gym.”
She stood over Nick, straddling his legs, then took hold of the top button on her shirt. “How about we play a game? I’ll ask you a question and for every right answer, I’ll unfasten a button.”
Nick looked her up and down. “Three buttons, three questions. I accept your challenge.”
“You haven’t heard the questions yet.” She grasped the top button. “First question—are you crazy ‘bout me?”
“Hmm. Yes?”
She unfastened the button. “Very good. I think you’ve played this game before. Next question—would you do anything for me?”
“I’ll have to say yes again.”
She unfastened the button. “Last question—are you glad I came to stay with you?”
Nick smiled. “Definitely yes.”
She undid the last button and let the shirt flow open, exposing her naked torso. She settled in Nick’s lap, facing him, then pulled his lips to hers. Nick slid his hands under her shirt and massaged her smooth skin. Felicia ground her pelvis against his groin, causing his cock to come to life inside his shorts. Nick got a whiff of her arousal and became more turned on.

To read more of this fast-paced romantic thriller, click on the link below. Happy reading!
"Memories Die Last" Amazon