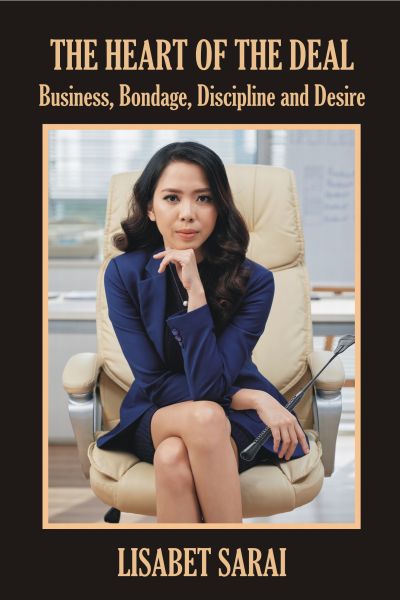 A skilled Dom understands at the gut level what the sub is experiencing. And a submissive can only give herself (or himself) fully if she can intuit what her Master wants. In fact, people who end up as “tops” in the BDSM lifestyle quite often spend some time in the submissive role first. Likewise, depending on the partner, a normally submissive person can switch and act as the dominant. Even my Master admitted that he had fantasies of bottoming to a powerful woman. Meanwhile, I have frequent dreams in which I’m the Mistress commanding the obedience of a younger female.

In my most recent release, The Heart of the Deal, I explore the paradoxical duality of power exchange. Ruby Maxwell Chen, lovely and ruthless CEO of a huge British business empire, has no qualms about playing dirty – very dirty. She’s happy to use sex to help her close a deal, especially when she’s the one on top. Ruby loves the game, and she expects to win. When she encounters the oddly charismatic American entrepreneur Rick Martell, though, she wonders if she hasn't met her match.

Here’s an excerpt from early in the novel that illustrates this. It takes place after Ruby’s first business meeting with the man who’s challenging her in a deal she’d thought was long settled.


My palm tingles long after he has left. Alone, I allow all the feelings to wash over me. Frustration at being thwarted. Gratitude that, through self-control, I managed to neutralize his advantage from last night. Admiration for his devious business skill. Perplexity regarding his real motives and plans.

And lust, fierce and pure, pouring through my veins like potent liquor. Now that he has gone, I allow myself to feel the tightness in my nipples, the ache between my thighs. The tension reveals its true source. My chic fitted suit holds me in bondage. I cannot reach the places that cry out to be touched.

An orgasm rips through me as soon as I feel the cool metal sliding into my depths. This does not satisfy me, though. I work the slick rod among my swollen folds, seeking relief that does not come.
Why does Martell have this overwhelming effect on me? Chemistry? Pheromones? It feels like something biological and irresistible.

Or perhaps telepathy, empathy, some psychic force that allows him to catch and shape my thoughts. This I understand, a bit. This is what I do when I play the dominant, intuit the form of my partner’s fantasies and reflect them back in my words and actions.

Oh, to have him in my power! Everyone, I believe, has some trace of the submissive, some secret desire to surrender, hidden perhaps even from themselves. If I could find and speak to that core in him…

I picture him naked, remembering even in my fantasy that I have never seen him so. Tanned, taut, nearly hairless except at his groin. He stands, as I command him, spread-eagle before the plate glass window of my thirtieth floor office. “Anyone could see you,” I remind him, tapping my ruler against one shoulder and then the other. “Anyone who happened to look up.”

He is nervous, now that he sees that I have the upper hand. His mocking grin is gone. “You seem to enjoy the exposure,” I comment, pinching his thickening erection. I survey him from one side and then the other, close enough that he can feel the heat of my body, catch the scent of my rising excitement.

“Place your hands on the glass,” I tell him, “to steady yourself for what comes next.” He swallows the lump in his throat and obeys. I sense his increasing arousal. I don’t need to check the state of his cock.

I am clad in a suit, of a more provocative cut than I would ever wear in a real business meeting. A suit signals power. I wear no knickers. I can feel dampness on my thighs as I strut before him on dangerous heels.

“Now, Rick,” I say, emphasizing the familiar nickname. “I am going to teach you a lesson about respect.” I snap the wooden ruler smartly against one muscled buttock. He gives a little yelp. Before he can recover, I apply the ruler to the other cheek, then repeat my blow to the first.

He is panting and his face is red. Meanwhile, his swollen penis points obscenely toward the ceiling.

“When you were a little boy, in Malaysia, Rick”—Swat!—“did your teachers beat you with a ruler to keep you in line?” (Smack!) “We British set up the educational system, after all, and we have always been great believers in corporal punishment.”

I slash the ruler across his butt three or four times in quick succession. His bottom looks like tartan plaid. I check his face, and sure enough, see arousal as well as discomfort. His lips are parted; his breath comes in little gasps. Since his first exclamation of surprise, he has made no sound.

“How do you feel, Rick?” I ask sweetly, murmuring in his ear.

“And is that all?” I ask, raking my fingernails lightly across his inflamed rump.

He is silent, stubborn. “Well?” I ask, and slap him with my open palm.

“Perhaps later, if you behave. Right now, though, I have something else in mind for you.”

“Don’t you want to please me, Rick?” I slather lubricant across my palm and run my hand suggestively over the length of the metal shaft. “I thought that you wanted to be my partner.”

He does not speak. His penis jerks as he tries to control himself.

I am fucking myself furiously, deep into this mental scene, when something shifts.

Add on Goodreads
https://www.goodreads.com/book/show/46258845-the-heart-of-the-deal
Posted by Lisabet Sarai at 3:00 AM