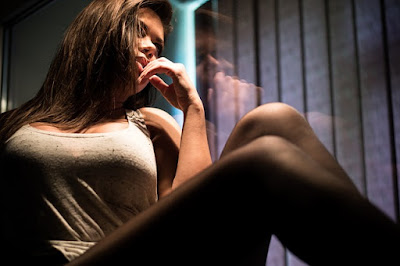 I'm asking myself if I've ever been attracted to my opposite, and I honestly don't think I have--not in any big sense. The people I'm attracted to are always similar to me in most ways. Our values and beliefs are the same, we tend to enjoy the same literature, films, music, all that.

I've never been the bookworm making eyes at the biker, nothing that extreme.

But if we're talking about sex, well, that is one area where I suppose I have been drawn to people who weren't exactly my mirror image.

When I was younger, I was strikingly confident with regard to sexuality--seeing as I was a virgin and all...

I remember watching American Beauty when it came out in 1999.  When it turned out that (spoiler alert!) Mena Suvari's ravenously seductive character was also a virgin, it was like looking in a weirdly humiliating mirror.

That was me. That's how I behaved. I found the idea of sexuality very empowering, but I'd never actually HAD sex.

Was I attracted to other people who made raunchy jokes and flaunted their assets? Of course not!  I had friends who were like me, but the people I was attracted to, when I was younger, were really quite bashful. Innuendo embarrassed them... excited them, too, I found out years later... but in the moment all I saw was the bashfulness... and all I felt was the power I wielded over men with my feminine wiles.

I liked being able to intimidate men, and I liked men I could intimidate.

I wanted to be in charge, and I was.

Later on, when I was confident in my sexual skill (because I actually had some), I found myself drawn to people who could expand my horizons. Looking back, I was pretty gosh-darn vanilla, at that point. If you'd asked me, "Are you vanilla?" I would have been like "Of course not! How dare you!" but when I think of all the things I hadn't done... wow, that's a long list.

I ended up with someone who was kinky as hell, and not because she was trying to be--she just exuded that brutal feminine confidence I'd felt so sure I possessed all those years ago. It was the dominating nature of her personality that taught me to submit. And, I tell you, it came as a relief to not be in charge in the bedroom anymore.

The effects spread beyond the bedroom, too.  Spread to my writing. If not for that confident kinkster, Lexi Wood would never have been born. She pushed me to write beyond my boundaries--to write incest erotica like the Adam and Sheree series, and Lexi's ever-growing list of short stories.

Sometimes you need someone who's going to challenge you.  You need it to grow.

Now I see myself as a kinky queer who is quietly confident about sex, but who doesn't have to be in-your-face about sexuality or wield it like a sword.

Maybe the whole "opposites attract" thing has operated with subtlety in my life. At times, I've challenged others to a game of sex. At times, I've been challenged. But the result has been growth, overall, and a better understanding of relationships, myself, and my place in the world.