The President and The Rentboy 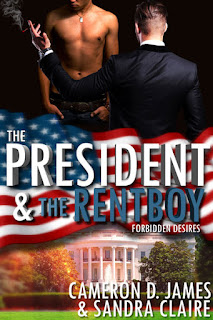 For "Opposites Attract" month, there aren't two men more opposite than a bombastic and powerful American president and an illegal immigrant Mexican rentboy.

I regularly get asked if The President and The Rentboy is based on a certain American president. The answer is "sort of". It definitely started that way (as I wrote, edited, and published this novella on the weekend before 45's inauguration), but it did take some different directions. However, you will find similarities in the first lady and the VP.

Newly inaugurated as the President of the United States of America, Daniel Grant has a secret. Despite winning a surprise upset election, built on a campaign filled with raucous rallies and an oft-repeated promise to deport illegal immigrants, Daniel is unhappy. While the media loves to speculate about him and his trophy wife, Melanie, the truth is there is no love in their relationship — moreover, as time goes on, Daniel is coming to understand that he prefers men. Itching for some sexual release, a senator discreetly hands him a phone number for Ricky — a rentboy.

Each sexy encounter with this seductive younger man leaves Daniel panting for more. But while his private sex life amps up, so, too, does his public political life, including increasing pressures from his vice-president to deport all illegal immigrants and bring about religious freedom laws so business can discriminate against LGBT customers.


Daniel struggles to balance his personal and public lives, to somehow continue seeing Ricky, despite the intense media scrutiny of everything the president does. Forbidden love is never easy, but it becomes near impossible when Daniel learns that Ricky, the young man he loves and desires so much, is an illegal immigrant from Mexico.

Click here for an excerpt and buy links!
Posted by Cameron D. James at 10:04 AM

Email ThisBlogThis!Share to TwitterShare to FacebookShare to Pinterest
Labels: forbidden desires, opposites attract, the president and the rentboy