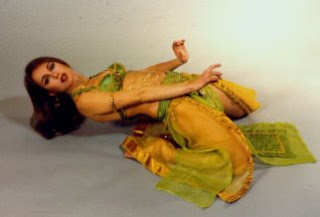 I love to dance. I always have. At four years old I spun round and round, drunk on movement, till I slipped and split my chin open on the unyielding linoleum. Six stitches left a scar I still carry proudly. For my fifth birthday, my parents took me to see the ballet “Giselle”. I remember afterwards, the thrill of being awake at midnight. I watched the snow drift down as we waited for the bus, still entranced by the unearthly grace of the dancers. At eight I had a solo in a community performance, improvising to Gershwin’s “Summertime”, and in high school I danced the role of Bonnie to my best friend’s Clyde.

My parents danced. When my dad led my mother onto the floor for a jitterbug, they’d immediately attract a circle of admirers. He would swing and twirl her, their steps in perfect synchrony, while the crowd applauded. At weddings and bar mitzvahs, I’d be overwhelmed with pride and with the desire to emulate my talented, sexy mother and my ultra-cool dad. It’s a pity they didn’t move to the same rhythms off the dance floor.

In graduate school, I enjoyed an extracurricular career as a belly dancer in a local Middle Eastern restaurant. People actually paid me to dance. I was astonished. The experience was magic. No thought, no fear, no plans – just the music flowing through me, shaping my arms, swirling my hips, guiding my feet. I was beautiful, beloved, free.

Flamenco, tango, rock and roll. The fluid control of Balinese dance, the frenzy of Rajastani steps, the smooth synchronization of a Broadway musical, the hectic kineticism of hip hop. I love it all. Watching a dancer may bring tears to my eyes. Or it may make my own limbs twitch and ache to join in the dance.

Dance for me is both a reality and a metaphor for the union of body and spirit. I use dancing in many of my stories. Incognito opens with a scene in a disco, in which a seductive stranger sweeps Miranda across the floor and awakens her latent passion. In Exposure, Stella exists in a trance-like state of heightened awareness as she performs her strip routine, half-convinced that she sees reads the minds of the men in her audience. Here’s a passage from a novel fragment that is sitting on my hard drive, waiting for new inspiration, tentatively titled Unveiled.


On my ninth birthday, my parents took me to see the great Nehir perform, and my destiny was sealed.

I sat bolt upright in my velvet seat, there in Symphony Hall, hardly daring to breathe, as the lights dimmed and the musicians strolled onto the stage. They settled themselves in a row of chairs toward the back. The drummer and the clarinetist whispered together for a moment, then nodded to the man with the oud. Then, an intricate sequence of notes dripped from his strings, rising up in the hall and falling again like plaintive rain.

The house went black. The oud solo still shimmered in the darkness, shivered down my spine, a lament centuries old. A bolt of light shot from the back of the theater, defining a perfect circle of brightness on the stage. There, motionless in the spotlight as though frozen by a flashbulb, stood a diminutive figure swathed in layers of turquoise and gold gauze.

The oud faded to silence. My chest hurt from anticipation. The dumbeq player coaxed two musical beats from his goatskin drum. Nehir raised her arm simultaneously, as though her movement had precipitated the drumbeats rather than the other way around. Two more beats, another gesture. She shifted her hips, making her jeweled belt sparkle, as the drummer matched her rhythm. She pivoted and bent backward, her veils brushing the floor behind her, to the next beats.

The clarinet joined the drum. Nehir’s bare arms snaked through the air. Her hips made slow circles, rising as the melody rose, dipping down when it sank to a lower register. The musicians were in taksim mode, improvising to a free form rhythm, and Nehir perfectly matched their every musical gesture, remaining immobile between notes.

The oud player picked up the melody, and abruptly, the drummer swung into a fast, regular beat. All at once, the dancer was all motion. Her shoulders shimmied, her hips shook, her fingers feathered the air. I could see her rise on her toes as she twirled, translucent fabric trailing behind her.

My heart beat in time with the drum as I drank in Nehir’s fluid, voluptuous movements. Her bare feet were light and sure as she traced the intricate steps of the age-old, ageless dance. She removed her outer veil, swirling it in sinous patterns around her, so that for a moment it seemed that she had a partner. My chest ached with nameless longing.

Nehir did not listen to and interpret the music. The music filled her, bore her up, swept her away in frenzy of glorious energy. She surrendered to the music. She allowed the rhythm to have its way with her. Let the melody enter her, take her, bend her into impossibly graceful forms, travel up her spine until her whole body rippled like water.

Her name meant “the river”, my mother had told me. As I watched her the floodgates opened inside me. I wanted to dance as she danced, wanted that more than anything in the world. I wanted the music to take me and use me as it did her. I craved the knowledge of motion and stillness that, even as a child, I read in her perfect gestures. And I knew, even then, that this was not a mere childish whim.

These days, I don’t dance as much as I would like. As the result of over-enthusiastic Jazzercizing over two decades, I developed arthritis in one hip. My days of doing splits are long gone. Even a shimmy hurts.

Still, I dance when I can, in bars or clubs or at parties, and pay the price afterward. While the music holds me, I am weightless and beyond pain. Later, my gratitude soothes the pangs in my poor weak flesh.

Ten years ago, I was trying to understand (as we all do) who I was and where I was going. What is your vision? one book asked. How do you see your life in relation to the world?

My answer to that question was the poem below.

My life will be a dance.
I will try to tread lightly,
bouyant
joyful
touching but not trampling.

I will trust my partners
and be trustworthy in return,
Follow through, complete the steps.

I will dance abundance
accepted and shared;
Faith, power,
peace and wonder,
And always, love.

Remember that the dance
flows from the inside out,
spirit to body
and out to the world,
And that all, spirit, body and world,
are sacred.
Even when solo, know
that I dance a part
in a larger pattern.
Leave behind
some increase of joy,
some greater beauty.