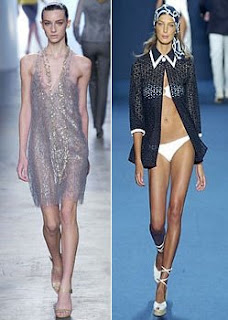 Is thin sexy? Sexual attractiveness is in the eye of the beholder, but I know from personal experience that our cultural obsession with thinness can be deadly.

In high school, I was what might be called pleasingly plump. Zaftig, as my Jewish grandmother would say, with more than ample curves for a teenager. Like many teens, I thought that I was fat. I always wanted to be thinner, but somehow, I could never manage it. I enjoyed my mom’s cooking too much.

Then, in my senior year, faced with all the stress of applying to colleges and the uncertainties of moving into the adult world, I began to lose weight. First I stopped eating bread and potatoes. Then I stopped adding milk to my coffee, drinking it black with artificial sweeteners. I ate all the salad I could put away, leaving the meat on my plate – cut into small pieces and spread around so that my mother wouldn’t notice. I’d check the scales every day, feeling pride whenever the numbers dropped, guilt and self-disgust when they didn’t. I still recall my intense flush of pleasure when I went for my annual checkup and weighed in at ninety-nine pounds. I’m just a bit over five feet tall, so my doctor was not alarmed. I was thrilled.

During my senior summer, I worked as a clerk in a grocery store, ate raw cucumbers and drank diet soda for lunch, and dropped more weight. By the time September rolled around, I was in the mid-eighties. My parents refused to let me enter university unless I gained weight. I got back up to ninety-two pounds, started school, but dropped out in a month, unable to muster the physical and emotional energy required.

My life for the next year and a half was spent in a limbo of medical and psychiatric institutions. At one point, I dropped below eighty pounds. I stopped menstruating. My limbs were grotesque sticks. My face was gaunt. My hair started to fall out. I was weak, constipated, subject to palpitations and anxiety attacks. I read voraciously during that period – that was about all that I could do. I don’t recall anything now. Zilch. My brain didn’t have enough nutrients to register new memories. In retrospect, the whole period is shrouded in a fog.

Anorexia had not yet become fashionable. I spent three months on the crisis ward of a state psychiatric hospital with suicidal housewives and drug addicts. I had to learn to trust my therapist when he told me that it was okay to eat. I had to suppress my feelings of disgust when I saw my weight climb back into a healthy range, and to deny the supposed evidence of my distorted self-image when I viewed my “fat” body in the mirror.

I was one of the lucky ones. I didn’t die. I didn’t suffer any permanent damage, other than my loss of memory. I have personally known anorexics who were not so fortunate. Without treatment, anorexia is fatal 20% of the time. Even with treatment, the mortality rate is 3%. With treatment, only about 60% of anorexics fully recover. (http://www.mirror-mirror.org). It took more than a decade for my body image and my eating habits to return to “normal”. 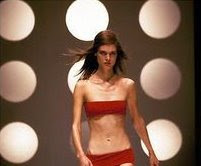 Can I blame my anorexia on the pervasive myth that “a woman can’t be too thin”? Not directly, of course. Research has shown that anorexia is as much about control and fear as it is about food. Still, if I hadn’t felt fat, I wouldn’t have started to diet, giving the obsession a chance to take hold. And I don’t think that I would have thought I was fat if I had not been continually bombarded by images of skinny women who were hailed as the ideal of beauty.

As the average weight of super models and movie stars has dropped, the prevalence of anorexia has risen dramatically. Is there a relationship? I think so. I was seventeen when I was diagnosed. Now ten year old anorexics are becoming increasingly common. One study found that 81% percent of ten year old girls and 46% of nine year olds dieted. The fear of being fat is so overwhelming that young girls have indicated in surveys that they are more afraid of becoming fat than they are of cancer, nuclear war or losing their parents. (National Eating Disorder Information Center, Canada)

So what, if anything, does this have to do with sex? I personally find skinny women far less sexy than ones who are more well-endowed. It occurs to me that the glorification of being thin in our culture could be an unconscious repudiation of sex. Today’s models and movie stars, with their narrow hips, flat stomachs, and A-cup breasts, look more like children or young boys than adult women. They are cool, graceful, elegant – but asexual.

They are safe. They offer no ample flesh to tempt the mind and raise the temperature, no perilous curves that lead you down the road to sin and perdition.

You may laugh, finding my thesis absurd. I have to tell you, as I watched the pounds drop off, I felt pure and clean. Virtuous. My adolescent sexual fantasies disappeared at the same time, melting away with my fat and muscle. Eating became the cardinal sin, because it nurtured the flesh, the evil blubber that threatened to consume me. Whenever the attendants in the hospital made me eat, I felt dirty, disgusting, smothered by my own body.

I’m intensely grateful that that I escaped from that madness. Even now, it’s all too vivid when I bring back the memories. 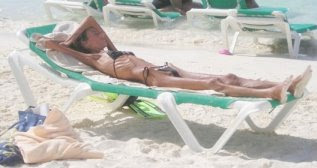 Now when I see a woman walking down the street or on the subway with the tell-tale bony knees, wasted arms and protruding cheekbones, a chill runs through me. I want to shake her, show her a mirror, strip away the hallucinations that make her believe she is still obese. When my eleven year old niece complains about how fat she is, I choke back my scream of frustration. You’re beautiful, Allie, I tell her, absolutely perfect, not fat at all.

With a sinking heart, I know that she doesn’t believe me.
Posted by Lisabet Sarai at 3:00 AM