Writing from the soul

For anyone who doesn't know exactly how this blog works, we all take it in turns to pick a topic to talk about each week. This week was my turn. It seems to me, you have two options when picking a blog topic.

Either you can pick a topic that you believe you have something interest to say about, or you can pick something you'd like to hear what other people have to say about. I'll confess that I picked this topic mostly because I was curious what everyone else would say.

There was, however, a point at which I didn't know the right words for all the things I was writing about. I wrote a lot of submissives before I knew that was the right word for what they were. I wrote negotiations and scenes and whole D/s plots without knowing any of the right words for the sort of relationship I was describing.

I found excuses for the relationships to be based on dominance and submission for a long time before I realised that excuses weren't needed. Fantasy, sci-fi, historical, paranormal. Looking back, I tapped every vein I could think of because I think, deep down, I was aware that most people in the real world around me didn't see things in quite the same way - so I went out and invented societies that did.

Now, I'm not talking about societies that were about a dominant gender or class or race suppressing another. I think I knew right from the start that my own ideas of dominance and submission weren't about that. I invented characters and situations which made the dominance and submission about love - about giving each character the chance to be happy with their lover, and inside their own skin too.

Earlier in the week Jamie mentioned doing research on various websites. I'm familiar with quite a few of them, but when I went on them, it was less like discovering a new world or a new way of doing things, as much as someone suddenly providing a dictionary of proper words for ideas that existed inside my head, but which I didn't have the right vocabulary to express.

That's why, all in all, I'm left without anything very interesting to say on my own choice of topic. 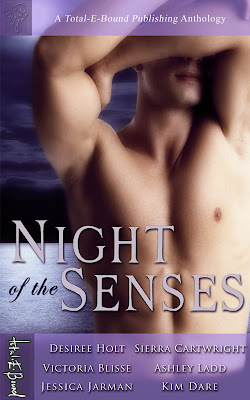 On a similar topic :)

My story - Whispers - is the extra-sensory one. As an M/f, vampire story about a 24/7, D/s relationship.

Charlotte is more than happy to offer her master her body, her blood and her submission. But her mind is her own, if he really is listening in on her thoughts, he has to stop – Right now!

As soon as Zachariah feeds from Charlotte’s blood, he begins to hear her thoughts whispering into his mind. A rare blood bond forms between them and Zachariah is thrilled. He’s sure the bond and his new insights into Charlotte’s mind will solve all their problems.

Zachariah has to solve a whole new set of problems if he’s going to prove he’s the master Charlotte’s always wanted, and Charlotte has to learn to do something she’s never done before – trust a master with her mind.

(At this point Zachariah has taken his first feeding and has just started to hear Charlotte's thoughts whisper to him over their mental bond. She is still unaware of the bond's existence.)

With gentle kisses, and teasing caresses, his hands and lips roamed over her body. He felt tension build very slowly in her muscles. He sensed the pleasure building, oh so slowly in her body. He forced himself to be patient. Human women could not be expected to have the same speed of reactions as a vampire man.

He ran his hands up her arms, intending to wind his fingers through hers. With his hands around her wrists, Zachariah leaned forward a little bit too far. His erection brushed against the soft skin on the inside of Charlotte’s thigh and slid higher. He felt the slick moisture gathering along her slit ready to welcome him.

With the extra sensitivity of the recent feeding, it was almost impossible to not to plunge forward, to bury his shaft inside her with one smooth stroke. His grip tightened around her wrists as he fought his body for control.

She caught her breath.

With a silent curse, Zachariah immediately softened his touch.

He looked to her wrists, but it was too soon to know if his grip had been too harsh, if he would leave a mark on her skin.

Charlotte shifted underneath him. He desperately tried to concentrate on her thoughts—on his only chance of discovering if he really hurt her—because he was damn sure she wouldn’t tell him.

Obviously the bond wasn’t reliable right from the start. He would have to practise reading his pet before he could rely on the bond to report accurately to him. He had no choice but to resort to more traditional means of communication.

He stared into her eyes, trying to read her expression. How could a woman hide pain from him so easily? Not even the tiniest flash of fear showed in her eyes. Before he could retreat, before he could explain to her such carelessness would never happen again, another thought came through to him.

More? He frowned down at Charlotte. He was so sure the bond would be the solution to every problem between him and his pet. He’d been so eager for it to be a magic pill.

The thought rammed into his mind, hard and certain.

Aware he might be about to make the biggest mistake of his life, he replaced his hands around Charlotte’s wrists and slowly tightened his grip.

She liked it. Even if he’d mistaken the words, the bond whispered into his mind, unequivocal hot pleasure flowed in a steaming torrent across the bond.

Zachariah tested his theory. He cautiously tightened his grip again.

He pinned her wrists firmly to the mattress. “Do you like this, pet?”

“I like whatever my master wishes to do with me.”

He hated those words so much.

Suddenly he had to get truth from her lips. He kissed her—not the usual gentle brush of mouths he was so used to employing with human women. It was a harsh demanding kiss, all about making her show a response—any response.

A soft whimper escaped from the back of Charlotte’s throat.

Zachariah felt the pleasure course through her and pushed her harder, letting more of his weight rest on top of her so he pinned her firmly against the bed at every point of contact. He made the kiss even rougher. Keeping his teeth to himself be dammed. Nipping at her lips, he thrust his tongue into her mouth.