Paranormal is anything not easily explained by science, such as those special noises my car makes for me but not the mechanic and why I once bought spray cheese in a can. Then there's the stuff you don't want explained away such as ghosts, fairies, vampires and shape-shifters of all kinds. Let's not forget those fascinating cryptozoologic creatures like Chupacrabras, Big Foot, the Jersey Devil, and BatBoy, or the ultimate crossover - a jackalope shape shifter. Who wants to live in a world where none of that is possible?
Okay, maybe it's no fun to think of something sentient hunting you down for a snack, but if the creature's hot, sex might not be out of the question.  (Safer sex tip - make sure he's fed before you start peeling off the dainties. If he says that you look good enough to eat, he might not mean it the way you would.)
For some reason which I don't understand, I tend to write a lot of paranormal stories. It's not that I think that ghosts are sexy or even desirable as lovers. Sometimes a girl wants a hard cock, and ectoplasm isn't going to get the job done. Plus, where can the relationship go? People will think you're bonkers talking to an empty chair across from you in the restaurant, not to mention that ghosts are notorious for "accidently" leaving their wallets at home. That's right. Ghost = cheap. Don't say I didn't warn you.
Werewolves in fiction have that whole alpha male vibe going. That sounds sexy until you realize that for every one alpha in a pack, there are twenty betas, and anyone who has ever been a beta tester for software knows that beta = unfortunate glitches. Even if you should end up with the alpha, then what? For the one moment you're in desperate need of rescue, he's at his best. The rest of the time he's just an overbearing guy with an extreme view of gender roles, and don't even get me started on his monthly version of PMS. BTW, if you're a guy- female werewolf = bitch.
Then there are vampires, the ultimate Freudian mash-up of forbidden sexual desires. You get more verboten kink for your monster lover buck in a vampire than with any other paranormal creature. In these economic times, who doesn't appreciate a good deal? So just remember that Vampire = value.
~~ 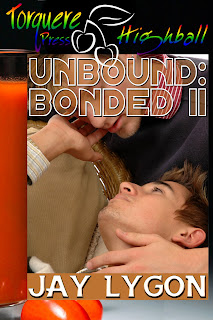 And speaking of budget-minded vampires, how about a snip from my  novella, Unbound: Bonded II.  Are you tired of those Byronic hero vampires who do nothing but brood in their gloomy castles? Bored by angst? Feel that vampires can be a touch whiney? Then Bonded is for you. Gleefully mixing pop culture with madcap comedy, the Bonded series assaults vampire dignity at every turn.
Fionn has waited six hundred years for revenge against Brandr, the vampire who turned him. The first part of his plot goes so well. He kidnaps the young vampires Kyle, Jamie and Henry from Brandr’s house. That’s all that goes according to plan though. Usually, the kidnapper makes demands, but this time it’s the hostages, and they'll make Fionn’s life hell until they get what they want. After a couple nights suffering at their hands, Fionn begins to worry that Brandr won’t take the boys back.
Revenge. It seemed like such a good idea at the time…
(These are gay vampires, but I promise you that this excerpt is PG-13  and generally squick-free)
Unbound: Bonded II
The door to Fionn's apartment slammed open so hard that it almost hit his face when he stormed
through it. He threw his gym bag onto the floor. "What the hell?"

No one heard him over the pounding music.

Wearing only his underwear, Kyle danced on the kitchenette table. A few dollar bills hung from his waistband. Jamie and Henry grooved together in sensual slow motion. Their cheeks pressed together as they kept their eyes turned toward the couch.

Fionn stomped over to the radio and turned it off. "What the hell do you think you're doing? My landlord called me at work and told me that there was a loud party in my apartment. He said he was going to call the cops and that he was going to evict me!"

"Sucks to be you," Kyle said. He ran his hands up his bare chest. Even though the music stopped, Jamie, Henry, and Kyle kept dancing.

Fionn jumped back when he looked over at his couch and saw three of his neighbors sitting there with vacant grins on their faces. Wounds from vampire bites bled at their necks. "What the fuck?"

Kyle ground around in a tight circle. The table wobbled under his feet. "We were bored, so we decided to dance. Then your nice neighbors showed up to join the party. You know how it goes -- we were thirsty, they were human..."

Fionn clutched his blond fauxhawk. "You can't do this. I'll get evicted."

"Dude! Do you have any idea how hard it is for two vampires to keep three humans under their thrall? Don't distract us, man," Jamie said.

"I demand you release them immediately."

"Whatever you say, Douchebag, but the second we do, there's going to be a lot of screaming going on."

"You may want to turn the music back on, just in case," Kyle said.

"Brandr calls us the unending go-go boy slumber party from hell," Kyle said. He nodded, as if he was trying to be helpful. "Oh look. Your eye is twitching just like Brandr's does."

Fionn sank into a kitchen chair. He clutched his head between his hands. "Please tell me this can't get any worse."

There was a knock on the door. Kyle leapt down from the table, sending it tumbling to the floor. Before Fionn could stop him, Kyle flung open the door. Two Los Angeles cops stood in the hallway.

Fionn groaned.
~~
Unbound: Bonded II, Bonded, The Quality of Mercy, and Twice Blest are available from Torquere Press.
Posted by Kathleen Bradean at 5:22 AM