I have a confession to make. Are you ready for it?

What's more, I have been told that I am halfway decent at it.

Here's another confession, but you have to promise not to tell anyone. Seriously, no one can know. Okay?

*Looks around to make sure no one else is listening* That's right, I am a naughty girl.

I used to watch the Red Shoe Diaries though. Those were hot for a teenager. LOL

My favorite nude model is Elizabeth Ann Hilden. I fell for her images in the Penthouse shoot that she did, and I have since collected a fairly decent set of images from those the photographer offers. 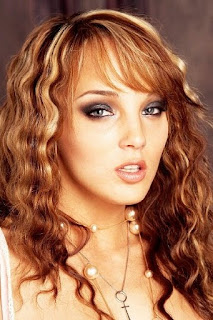 I am not much on giggles, which she occasionally does, but something about her, especially when she is going down on another girl, just turns me on.

So I can forgive the occasional air-head appearing moments.

Now, that said, you have to promise not to tell anyone, okay? Because we all know that most societies (including the US) just can't handle knowing that people are enjoying sex.

Remember, women are just supposed to lie there, close our eyes, and think of the Queen mum. Or at least we were before we broke from the mother country. Not sure who we are supposed to think of now.

It's just so naughty! But damn, it feels so good!

Anyways, that's my secret. But shhhhh, you can't tell anyone!
Posted by Michelle Houston/Houston Michaels at 5:20 PM