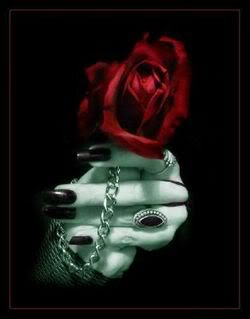 I've always believed in magic. When I was a child, I had rituals to ensure that there'd be a snow day on the morrow, or that the teacher would forget to give us homework. Sometimes they worked – more often, it seemed, than would be true by chance. We lived in a semi-rural area and my father would spin tales of ghosts, demons and other creatures of power that lived in the woods around our house, chilling and delighting me and my siblings. Later, I'd catch glimpses of these supernatural denizens out of the corner of my eye and I'd know I wasn't alone. Somehow, I was never truly afraid – I accepted that there were more things in heaven and earth than television, arithmetic and doing my chores.

When it comes to the paranormal, I've never really grown up. I haven't personally encountered any spirits, but from time to time I've had vivid, prescient dreams and even waking premonitions that turned out to be true. I'm convinced that on rare occasions I have experienced telepathy. And sometimes, it seems that I have the ability to cast spells and shape reality, to materialize my fantasies.

That is, of course, what writers do – make our fantasies real. Writing paranormal fiction lets me indulge my belief in the powers beyond the mundane surface of our world.

These days, “paranormal” seems to include everything from vampires to time-travel For me, the defining element in paranormal fiction a sense of wonder. I've gotten somewhat tired of vampire fiction because for the most part, it has lost the power to amaze and excite.

That didn't stop me, of course, from writing my own vampire novella, Fire in the Blood. I like to think that Etienne, the vampire hero in this work, does evoke a sense of awe in the two human protagonists (as well as, I hope, in the reader). His power lies in the force of his personality, the nearly irresistible attraction he exerts. Flirting with a vampire is flirting with death, and that somehow heightens the excitement for Maddy and Troy. Even after Etienne has accepted them as lovers, they are still overwhelmed by his unearthly glamor. They are quite literally enchanted.

Rendezvous is another paranormal tale of mine, set, appropriately, on Halloween. My heroine, Rebecca, is much like me. Halloween has always been special for her, an opportunity for her to cast off her sensible, ordinary self and assume a new look and a new identity: someone extraordinary, sensual and seductive. When Halloween night finds her stranded by a breakdown in a seedy motel nearly a hundred miles from her friend's annual party, she's terribly frustrated and disappointed. Then she discovers that her room is haunted by the invisible but unquestionably virile ghost of a rake who seduced local women nearly half a century earlier.

I loved writing this story, because I was able to describe the way I'd personally feel if I found my motel room was inhabited by a ghost. Scared, definitely, but thrilled nevertheless at the tangible evidence of the supernatural. Of course, a ghost who happens to be a well-practiced dominant, like Tony, would add to the excitement.

The costume worked its magic. I was astonished at how regal I looked, and how desirable. The bodice pinched my waist to tiny dimensions, and forced my breasts upwards. The square-cut neckline drew attention to my swelling flesh, barely hiding my nipples. In fact, they were not hidden at all. Though I'd lined the top with muslin as the pattern specified, the tight nubs were clearly visible through several layers of fabric.

I cradled my breasts and used my thumbs to trace circles around those sensitive buds. With each cycle, the spring of tension in my cunt wound tighter. A light flick of my thumbnail sent electricity down my spine and triggered spasms of pleasure. I worried briefly that the juices trickling out of my cunt would spoil the satin. But after all, what did it matter? There was no one to see me tonight, no one to please but myself.

“You certainly do look sexy. Like something right out of de Sade.”

“What? Who...?” I whirled around in confusion, my heart slamming against my ribs. The voice had been close, right next to my ear. Yet the room was empty, unchanged. The same rippling walls, the same thread-bare carpet, the same rusty stains on the ceiling. The rumpled bed where I'd had my tantrum. The almost-empty glass on the dresser.

Ah, the liquor. I must be more drunk than I thought. I turned back to the mirror, searching my face for signs of intoxication, and yelped as something, someone, pinched my nipples.

“It does, at first. But afterwards, it changes, doesn't it? Afterwards, it feels quite delicious.” I stared at my image, mouth hanging stupidly open, as invisible hands caressed my breasts. Strong hands, gentle hands, hands that seemed to know exactly how to make me shiver with delight. “That's what most people don't understand about pain. It's the gateway to the most exquisite pleasure.”

The voice was a melodious baritone, rich, deep, almost hypnotic. “You fear the pain, but that's foolish. You must surrender to the pain. Let it move through you. Let it wash away your doubts and your inhibitions. Let it open you to ecstasy.”

Firm, unseen lips nibbled at my neck. A warm, wet tongue traced the curve from below my ear to my exposed shoulder, then down to the hollow at my throat. With each touch, extravagant new species of pleasure bloomed in my sex. I closed my eyes and let my head fall back, savouring the delicate caresses and the amazing sensations that they triggered in my cunt.

Then suddenly, something sharp pierced the rounded flesh of my shoulder. I screamed, surprise heightening the agony that gripped me, and tore myself away from the grasp of the unseen intruder.

My reflection made me gasp in horror and wonder. Droplets of blood oozed from several wounds on my shoulder, wounds arranged in the distinctive semi-circular shape of a bite.

I felt an arm around my waist, pulling me backwards against the unmistakable bulk of a male body. I struggled against his seemingly supernatural strength.

“Let me go!” There were fingers at my back, unlacing and loosening the bodice, working their way into my top.

“Is that really what you want?” A hand snaked into the opening I had left in the voluminous skirts—a slight modification I had made to the pattern. After all, what was the point of wearing a sexy costume if it made you inaccessible?

I live in hope that I'll someday have an experience like Rebecca's. Meanwhile, I read and write the paranormal tales that make my heart race and my spine tingle, tales that prove that magick is still alive.