I never make resolutions. I can't, because inevitably it will mean ending this year on a low note. December 31st will roll around and I'll look down at the things I promised myself, only to find I haven't accomplished a single one of them. I didn't crash a blimp into another blimp. I haven't invented the world's first sex-robot, with a face like Armie Hammer's and a body like...well...Armie Hammer's. In fact I was really just intending to grab Armie Hammer and stuff him in a bin bag, then haul him back home to the sex den I've made for him under the stairs.

But on December 31st I won't have achieved that, either. And then I'll just have to kick my own ass, and no one wants that. Last time they found my leg in a tree, and I had to be put together with the spare parts I had left over from my failed Armie Hammer sex-robot plan. Now I have one big leg, one tiny one, and a third enormous one that I'm not quite sure what to do with.

Am I supposed to use it in some sort of...tripod type configuration? And when it goes all droopy, do I just wind it up and store it in his conveniently gigantic belly button?

Thought so. But enough thinly veiled references to Armie Hammer's immense tripod penis! Onto resolutions so insane that anyone could achieve them, just by existing:

1. I will not fail to definitely maybe not sort of eat less chocolate. Yeah, take that December 31st me. Your chances of deciphering that sentence are slim, to none.

4. Answer the telephone and talk to the person who has also used a telephone.

5. Agree with something - or if the thing is really bad, then maybe disagree with it.

6. Want something because of reasons.*

And there is my list of totally possible resolutions.


*I think this comes from a Kate Beaton comic, so I'm not sure I can claim it as one of my own resolutions. It's really more this guy's resolution: 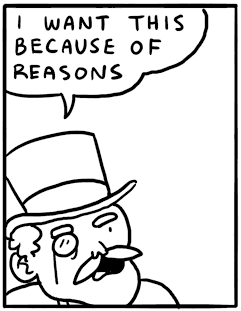 But then, that guy is ORSUM. I'm thinking of subscribing to his newsletter. Wanting things because of reasons! HOW did I never think of that before? I intend to want things for reasons all the time, from now on.
Posted by Charlotte Stein aka The Mighty Viper at 7:20 PM