Almost Not a Cat Person

Perhaps the most prominent example of this presently in my life is my second cat, Shadow.  (I suck at picking cat names — this was picked by a little girl who took care of the cat before me.)

Let me back up and say that I am NOT a cat person.  At least, I wasn’t one before.  My partner wanted a cat to keep him company since he works at home all day, and since I was the anti-cat person, it fell to me to pick a cat for us.  I avoided it as long as I could, but if I ever found myself in or near a pet store, I would inevitably wander by the cats.

There was one cat that finally got my attention.  He came with the name Whisky and he was a humane society cat from a small town.  I walked by the windows of the cat display and Whisky immediately got up and rubbed his face and body against the glass, desperate to connect with me.  I asked to meet the cat and instantly fell in love.  I got my partner to drop everything and join me at the pet store.  Two hours later, my partner was stunned that he was going home with a cat on his lap.

The three of us lived happily.  Whisky loved exploring his new house and getting to know his new family.  I immediately became a cat person, something I never thought would happen.  (This was the first “close call” with cats.  If I’d not wandered into that specific store and if Whisky hadn’t made a deliberate attempt to connect with me, I might still be cat-less today, and our house would still feel empty.)

A couple months after Whisky settled into his new life with us, a friend of my partner told us about a homeless cat that was looking for a family.  Since this person knew we were new cat owners, he thought Whisky might need some company in the form of a small, black kitten named Shadow.  The friend knew a family that lived on a rural farm property and a kitten, who had obviously been an indoor cat until very recently, had wandered onto the property.  They suspect someone drove out to the country, opened the car door, dropped the kitten at the side of the road, and drove off.  (It sounds horrible, but last year I saw someone do just that downtown.)  The kitten desperately needed a new home, as it had been living in the woods around the farm for a few weeks and the barn cats were beating him up and not letting him on the farm.

A couple weeks passed after the friend made that request.  We never heard about the cat again, so we figured it had gone to someone else and that was probably a good thing—we were in no position to adopt another cat.  When we finally decided firmly that, no, we would not accept the cat if the question came up again, my partner got a phone call from this friend.  “I’m coming back to the city and I’ve got the cat with me.  Meet me at my place because I can’t take him inside because my cats will be mad at it.”  The decision had apparently been made for us.  There was no question of if we could take the cat; we were being told to come pick it up.

My partner went and met his friend and took the cat.  He was a mangy little thing—stinky, scrawny, and crying nonstop.  The first night with him was a nightmare; to prevent transmission of worms or fleas or anything, we had to keep him alone in a small room and we heard his desperate plaintive cries through the whole house.  The next day we took him to the vet and he screamed the whole way there, with a yowl that sounded distinctly like “Hhheeelllppp…”

We told the vet that we had decided we couldn’t keep the kitten, but we would make sure that he was healthy before we re-homed him.  (I didn’t feel right not taking care of this kitten’s health when I had the means to do so.)  And since he was living in the woods for a few weeks and, we believe, neglected by his first home, there were a few medical issues to take care of.

We took Shadow home and put him in his private room again.  He had to be kept separate for several days until we were certain there was nothing he could transmit to Whisky.  Whisky would spend his days on the other side of the door, hissing and snarling.

As the weeks passed as we took care of Shadow’s health issues and we got him fixed, we began the slow introduction of bringing him and Whisky together.  It was a disaster.  Whisky was horribly mean and attacked Shadow regularly.  The stress and tension of all four of us—humans and cats—was incredibly high.  (Also, at the time, my grandmother was in hospital and nearing the end, only adding to the negativity in my environment.)

We had to get rid of Shadow.  That was the only solution to all of this.  If we could go back to being a one-cat house, then the stress would be gone and I could deal with the other issues in my life.

Just when we were at our breaking point with Shadow, everything suddenly changed.  Whisky stopped attacking him and Shadow stopped his non-stop full-throated whining.  (Coincidentally, this was the day before my grandmother passed away.  She was worried about us and the cats, so I was able to tell her that everything seemed to suddenly be going okay and we could make this work.)  We had no understanding of why everything had magically changed, but it did.  All of the problems just seemed to have evaporated overnight.

Shadow was still a very timid kitten.  We’re pretty sure that in his first home, not only was he neglected, but he was likely locked in a small room, ignored, and given no stimulation.  Over the months since then, Shadow has grown increasingly confident and continues to learn how to be a cat.  (It’s only a few months ago, after he turned about a year old, that he discovered that it’s fun to go under blankets.  Until that point, it absolutely terrified him.  I literally had to teach this cat how to be petted, as he was so desperate for human contact that he would squirm so much when anyone petted him, that petting soon became impossible.  I also had to teach him how to sit on my lap and how to play with toys.)

Shadow and Whisky now get along very well.  Whisky still picks on Shadow now and then — but Shadow also encourages it.  Quite regularly, I’ll see Shadow hit Whisky on the head several times and then flop on the floor in front of him, waiting to be attacked.  But after their playtime, they're often found snuggled together in their cat bed, or grooming each other in the kitchen.

Shadow was the bigger “close call” of the two cats.  We were determined to give him up.  We told everyone that Shadow was not staying and that he would need to find a new home—for his safety and our sanity.  He needed to live with someone who was prepared to give him the attention he so desperately needed.  He got very close to being moved into a new house with a new family.

But by waiting as long as we did, because of those medical issues, we accidentally gave him the time to adjust to his new life and settle in.  If we had moved quicker, he would be somewhere else.  It's really because of a persistent ear infection (which has since cleared) that he stayed long enough to carve out his place in our home.

Shadow is now an integral part of the family. 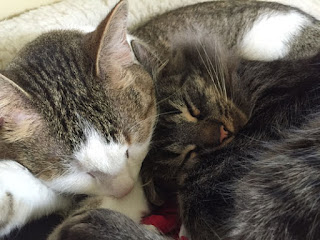