Urgent Reading for Knowledge and Comfort

Lately, I really need my books, both to soothe me and to inform me, and sometimes both at once. Here's a selection of what I've been reading recently. The first two both soothed and informed me, the third is not soothing at all, and the last is the soft chaser I sometimes need to keep going.

You Can't Touch My Hair: And Other Things I Still Have to Explain by Phoebe Robinson 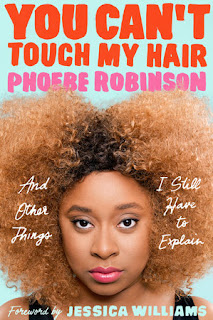 I usually don’t actually laugh at books written by comedians, though I enjoy them. This book was different, partly because it is the best adaptation to the audio format I’ve ever experienced. Robinson’s writing style is conversational, and as an audiobook, it feels like she’s having a conversation with the reader, and being hilarious in the process.

The book has a light tone (for example, Robinson ranks the members of the band U2 in order according to which one she wants to sleep with the most). At the same time, it’s got a lot of incisive cultural commentary and history. Her account of significant moments in black hair in media ought to be a requirement for anyone interested in pop culture and its implications.

I loved Robinson’s analyses of race—a particularly great moment came in a series of letters to her biracial niece, in which she discussed her niece’s white heritage (even calling in white comedian John Hodgman for an assist) as well as her black heritage. U.S. culture loves to collapse racial matters into literal black and white, and I’ve rarely seen such deft handling of what it means to be multiracial.

I’d highly recommend this. If you’re the type to listen to audiobooks, I think it’s well worth checking out that format for this one. 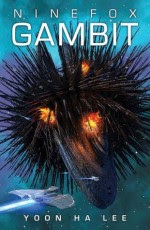 This book! This is the book I’ve read in the past several months that I want to shove at everyone I know. I never reread books, and I’m planning to reread this one.

To win a key military victory, Kel Cheris is manipulated into hosting the consciousness of Shuos Jedao, a great military genius who also massacred a million people, including his own army. It’s incredibly difficult to tell who can be trusted and how, and trying to piece that together alongside Kel Cheris as she tries to fulfill her duty and care for the soldiers under her command makes for an incredible story.

If you have any interest in military science fiction, this is at the pinnacle of the genre. It’s got really meaty tactics that give you a chance to appreciate the genius of the characters, and it never loses sight of humanity or the human cost of war. The Hexarchate is a fascinating governmental system, and the book also reads like a mystery story—I got so invested in figuring out the history and context of this that I panted for every little revelation.

I think there are conventions to being a modern science fiction reader. One is that there’s often very little handholding. You’re plunged into a vastly unfamiliar world, and it’s your job as a reader to work hard and piece together what’s going on. Ninefox Gambit really requires this skill. I reread the first chapter many times as I read the book, looking at it again as I gained new understanding and context for what was going on in the opening scene. This is a master class in compact writing. There’s not a single wasted scene or word.

The book rewarded every effort I made. About halfway through, I got so caught up in the plot that I finished the book in a binge, and this is one reason I’d like to read it again. This is the first of a trilogy, and I don’t want to miss anything.

If you’re intrigued by this, you should check out Yoon Ha Lee’s piece at The Big Idea, which goes into, among other things, the problem of accurately portraying what it feels like to be a genius when you aren’t one, writing a female POV as a trans man, and subverting tropes.

Give Us the Ballot: the Modern Struggle for Voting Rights in America by Ari Berman 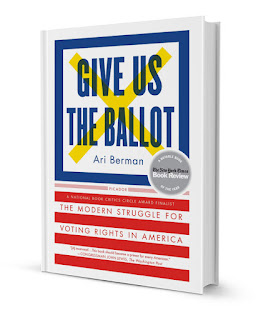 I’m not deep enough into this book to fully review it, but I am reading it now. It covers the history of voting rights in America over about the last fifty years, and so far it’s quite a painful story. The opening chapters cover the inception of the Voting Rights Act, while also making it clear how it’s been recently diminished. It’s devastating to read about John Lewis sitting there in the U.S. Supreme Court while this legislation, which he almost died for, gets gutted.

As it did to many people, the election hit me hard. I’ve read a bunch of internet news and opinions, too, but one of the conclusions I’ve drawn is that it’s important to educate myself more deeply about what’s going on with race and government in the U.S. I’m really concerned about the various insidious legislation that’s been undoing civil rights advances like the Voting Rights Act, and setting the stage for the sort of white supremacist ascendance that’s happening now.

I feel overwhelmed thinking about all the cruel, corrupt things coming down the line (and already beginning). I don’t love being an activist—I’m a pretty anxious person, and it’s scary. On the other hand, I feel both moral obligation and personal fear. People in my family and circle of friends have already suffered from incidents related to the atmosphere of emboldened racism, and I don’t think that’s poised to get better.

So my personality is that I like to feel confident that I know my stuff when I speak up, and I’m trying my best to get to that place. And voting rights is one of the things I really want to be there for, because that’s one of the only ways I can see out of this mess.

And I’m going to go ahead and say this, too: I am incredibly sick of reading stuff that claims that because Hillary Clinton lost, the takeaway is that it’s not going to work to advocate for non-white people and other marginalized groups and “we” need to focus elsewhere (specifically on the needs of white people who seem to have been okay with voting for a platform that included a whole lot of racism).

I think one of the most important things going forward is that we (no scare quote for we in this case) can’t let non-white people get sold out in the interest of getting along. Because that’s a vision of getting along that really means getting along for white people and turning a blind eye to everyone else’s suffering. I’m not here for that. I don’t want to hear about the conciliatory attitude that’s going to win “us” votes, because that’s not real us.

Dude wants a white supremacist as his chief strategist. I’m already reading stories about supporters of the president-elect talking about how the “precedent” set by Japanese internment camps makes it okay to have a registry for Muslims. My father’s best friend was in one of those camps as a child. Listening to him talk about it really opened my eyes—his experience is the sort of thing that really doesn’t match the story of America, great nation, that I learned in high school, and I’m not here for any repetition of that.

So that’s afield from the book, but I’m going to leave it in because I think it needs to be said over and over. The point is, it behooves us to pay attention to things like the ongoing efforts to disenfranchise minority voters. So I’m reading this book. And I’m going to try to stand up as best I can, and I’m ashamed I wasn’t more active leading up to this (it didn’t happen overnight, obviously).

Under a Falling Star by Jae 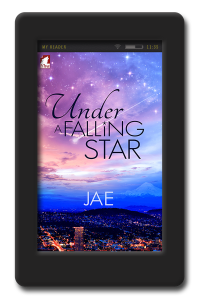 The story equivalent of delicious comfort food. This is a satisfying and sexy lesbian romance that gets unusually deep with characterization and character arcs. I really appreciate that Jae presents flawed but likeable characters, but then, instead of handwaving away their differences because “love,” she actually gives them the time to work those things out and move toward each other. I’m not used to having the chance to get so deep into a romance, and I really liked it. Jae gives the reader a clear view of these people as individuals, and it’s easy to see how they complement each other. By the end of the book, I could honestly say, this style of relationship would not be for me and wouldn’t match my personality, but I’m really happy for these people. I’ll be looking for more by this author for sure.
Posted by Annabeth Leong at 8:33 AM

Email ThisBlogThis!Share to TwitterShare to FacebookShare to Pinterest
Labels: Ari Berman, Give Us the Ballot, Jae, Ninefox Gambit, Phoebe Robinson, Under a Falling Star, Yoon Ha Lee, You Can't Touch My Hair