It may have been my second or third day on the west coast, certainly within the first week of arriving in San Francisco. November, 1968. My (now late) brother-in-law and some friends decided to take me out to hike near the famed “Cliff House”, a well-known point of interest in a city filled with fabulous things. 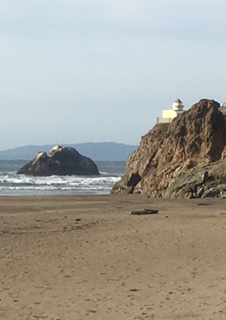 Amazed at the view but unfamiliar with the terrain, the four of us boldly scrambled down the steep embankment, perhaps 150 feet above the crashing Pacific and jagged rocks below. There wasn’t a danger of falling; our angle of descent wasn’t nearly 90 degrees. Not yet.

The further we descended, the steeper the trail became. A friend and I jumped to a narrow ledge where we could go no further. We’d hit an impasse: a sheer 40-foot drop without benefit of trail or even a handhold. Though not quite 90 degrees—there were several places where a falling body would take a bounce or two on the way.

The two of us screwed around at that level while the others lingered a few feet above. We smoked a joint, explored a few shallow caves that pockmark the cliffs in the area, goofing on the water puddles that gathered there. Water? Puddles?  The thought never sank in. Why would water puddles exist in a cave forty feet above a crashing sea?

Next thing we knew, the two of us were hit by something wet, wild and powerful, slamming us against a rocky wall, filling our shallow cave with frigid water. The depression in the rocks suddenly overflowed with seawater bubbling and swirling around us—then as quickly—drained away. We stared wide-eyed at each other, in shock at what had just happened. I had time to gather my wits and realize I was bleeding down the front of my drenched shirt. Contact with the cave wall had split the skin on my face. We were lucky we weren’t washed away.

We turned to realize there wasn’t a way back up. The two who’d remained above saw our predicament and tried to reach down to haul us back to safety. They couldn’t reach us. We couldn’t reach them. We tried winding a belt around one guy’s wrist. It wouldn’t reach. Affixing two belts together just seemed wrong.

The only way up was over a huge boulder embedded in the perpendicular wall. Only one of us could go at a time. From our lower vantage point, we saw that the boulder was tentatively held in place in unstable sandstone, a thin crack obvious along the perimeter where it joined the cliff.

The friend (Grattan, now also passed) sharing the ledge with me was a big, tall, strong guy.  I asked him to go first, figuring that he would, in turn, be more capable of lifting me from above. I was relatively smaller and much lighter than he. So he stood on my shoulders and the guys above were able to drag him up, leaving me alone on the narrow ledge.

Without the extra height my back had offered Grattan, it was up to me to get up as far as I could, leap and grab on to the insecure boulder, hugging it until my (very good) friends could hopefully grab me before I lost my grip or the rock broke away. That’s when the crack along the boulder really posed a threat. That rock would either be my saving grace or my downfall. Would it hold?

Grattan, so recently on my shoulders, stared down in a state of overwhelmed panic. I’ll never forget that look on his face. I had to do it. Sooner or later, another wave might strike. I needed to act. It was just a matter of a few feet. I had to make up my mind to just do it. I simply needed to go without hesitation. I had to jump up and hang on that rock in hopes that it wouldn’t come away from the cliff—that the boulder and I wouldn’t go down together.

Needless to say, the maneuver came off fine; I have lived to tell the story. Since then, not a year has passed when someone isn’t killed on those rocks and nearby beaches, as it has always been. Tourists coming from the Midwest and East Coast have no idea, just like I didn’t have any idea. This is not the Atlantic, the Great Lakes or the Caribbean. Pacific sneaker waves will drag a person off without warning. Hence the ‘sneaker’ moniker.