Breaking the Barriers of Imagination

“You can’t be Luke Skywalker,” my cousin informed me. “You’re a girl, so you have to be Leia.”

I remember being confused by this, though I don’t remember the logic I used in my argument. As an adult, I would explain my confusion this way: none of us had Jedi powers, and yet it was possible for us to pretend to be Jedi. None of us flew spaceships or had light sabers or blasters, and yet we could pretend we did. None of us lived a long time ago in a galaxy far, far away, and yet that wasn’t stopping our flight of fancy. None of us were wookies, and yet one of my cousins was pretending to be Chewie.

Given the staggering acts of imagination already involved, why couldn’t I also imagine myself to be Luke, who happened to be a boy? Couldn’t I be girl Luke? Or couldn’t I be boy Luke for the course of this game of make-believe?

“No,” my cousin said, in response to whatever version of this I managed as a young child. “You’re a girl, so you have to be Leia.”

Leia. Donut hair head Leia. Not a person with a lightsaber. In fact, by this logic, there were no people with light sabers whom I was allowed to be.

It may sound silly, but it was one of my childhood’s deep hurts, a warning shot about all the things being a girl was going to mean for me, all the ways it was going to limit me and keep a lightsaber out of my hands.

I am a person inclined by nature to obey rules, though you might not guess it from who I am today. So, once I acquiesced to my cousin, I acquiesced in general. I never tried to dress up as a boy again.

Until (drum roll, please) last Saturday night, when I went to a costume party dressed as Illidan Stormrage, the part demon part night elf antihero from World of Warcraft (and star of the current Legion expansion). 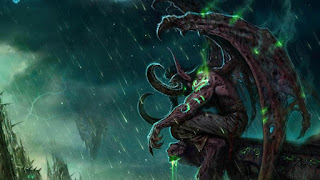 The way I see it now, as an adult, I don’t eat demon hearts to gain power, though I can pretend to. I don’t have bat wings or horns. I didn’t tear my eyes out in the middle of a maddening apocalyptic vision, nor did I regain my sight through the use of dark magic. I don’t know how to fight with two fel-infused warglaives, and I don’t know how to fly. Given all these things, the smallest part of the leap of imagination here is that Illidan’s preferred pronoun is “he” and mine isn’t.

I can’t tell you how powerful I felt dressing as him. Some of it was that this costume freed me from the sexy/non-sexy dichotomy that seems to overshadow efforts to put on a character as a woman. I wasn’t dressing attractively or unattractively. I was dressing as Illidan, as a person who puts power above all else (and who gains a weird but largely irrelevant sex appeal in the process).

One of the things I’ve noticed as I’ve played with gender is that part of what I feel while using she/her/hers is a constant sense of my sexiness or lack thereof defining me. It’s interesting and important as a woman (and as a society) to think about how to step out of that. It’s also wild to step into another gender, even just for a costume, and feel that change and fall away. (That’s my sense of this thing—your mileage may vary).

The other part of the power, though, wasn’t about Illidan. It stretched all the way back to that time I tried to be Luke. When I bound my breasts and put on a muscle shirt printed with tattoos to match Illidan’s, I felt like I finally had an answer for my cousin, three decades later. You say I can’t be Luke? You’re wrong. I can.

I’m not exactly sure if I was girl Illidan or if I was stepping into the role of boy Illidan or nonbinary Illidan or something else. That matches another part of what I’ve learned in my timid attempts to play with gender. Once I step outside the lines, I’m not always sure where I’m putting my feet. Not all questions need to be answered immediately, though, and what mattered most was how good I felt in my costume, how strong.

I said in a comment earlier in this topic cycle that I think one reason Halloween has historically been important to queer people is that it gives you a chance to step outside societal lines, and it eases some of the consequences for doing so. That’s certainly true for me, to this day. I’m not sure where I’m going with gender explorations, but dressing as Illidan Stormrage gave me a relatively safe way to do things I’d been too scared to do when it wasn’t Halloween.
Posted by Annabeth Leong at 11:52 AM