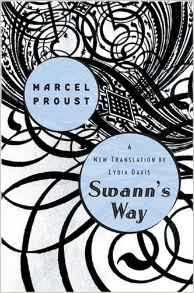 Today is the anniversary of the death of Marcel Proust in 1922. He was born near Paris in July 1871, and for many readers, he exemplifies the upper middle-class culture of the Gilded Age at the end of the nineteenth century. His big, sprawling series of more-or-less autobiographical novels, A la recherché du temps perdu, was his life work, and the books have been translated into English several times. The first English translator, Scott Moncrieff, was a contemporary of Proust, and he translated the title of the series as “Remembrance of Things Past,” a phrase from a Shakespeare sonnet. Proust was still alive, and apparently he knew enough English to be unhappy about it. More recently, Proust’s title has been more accurately translated as “In Search of Lost Time.”

To make a long story short, I finally decided to dip a toe into the river. Most of my colleagues in the English Department of the local university seem to know Proust’s work, and so do various writers I’ve met on-line.

Maybe I needed a big distraction from the ongoing bad news coming from the U.S. after the nightmare election.

For years, I’ve avoided Proust for several reasons. I usually have something else to read that I’ve agreed to review or beta-read. Obviously Proust isn’t likely to disappear any time soon, so I thought I could make his acquaintance later. However, when I came across a free paperback version of the Moncrieff translation of the first volume, Du Cote de Chez Swann (“Swann’s Way” – more accurately, “On the way to Monsieur Swann’s house”), I decided to dive in.

Nowadays, it’s hard to appreciate Proust’s daringly subjective approach, because stream-of-consciousness novels in various languages have had so much influence on current literature. Proust doesn’t even pretend to be objective, although the whole saga could be described as a search for personal truth. Swann’s Way begins with an “Overture,” in which the narrator (occasionally called “Marcel” by other characters) is a little boy who has insomnia in the home of his relatives in the picturesque village of Combray where he and his parents spend every summer, beginning in Holy Week. (Their own house is in Paris.)

The adult author is plunged back to his childhood summers in Combray by the taste of a cup of tea with a few crumbs of madeleine (a small cake)* soaked in it. Sensory experience (taste, sound, sight, smell, feeling, touch) is shown to be directly connected to memories that enable one to relive the past. 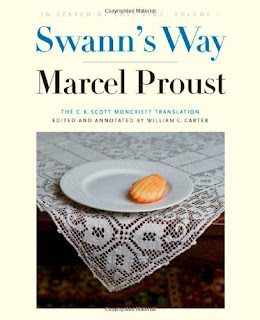 The boy’s age is vague, but apparently he is old enough to have “wet dreams.” Here is Moncrieff’s delicate translation:

“Sometimes, too, just as Eve was created from a rib of Adam, so a woman would come into existence while I was sleeping, conceived from some strain in the position of my limbs. Formed from the appetite that I was on the point of gratifying, she it was, I imagined, who offered me that gratification. My body, conscious that its own warmth was permeating hers, would strive to become one with her, and I would awake. The rest of humanity seemed very remote in comparison with this woman whose company I had left but a moment ago: my cheek was still warm with her kiss, my body bent beneath the weight of hers. If, as would sometimes happen, she had the appearance of some woman whom I had known in waking hours, I would abandon myself altogether to the sole quest of her, like people who set out on a journey to see with their own eyes some city that they have always longed to visit, and imagine that they can taste in reality what has charmed their fancy. And then, gradually, the memory of her would dissolve and vanish, until I had forgotten the maiden of my dream.”

This seems like a foreshadowing of the narrator’s relationships (to use the word loosely) with actual women, as well as other heterosexual relationships in the series. The comparison of an imagined woman with an imagined city also seems significant, especially since a long section at the end of Swann’s Way (“Place-Names: The Name”) describes the narrator’s impression of various small towns on the rocky coast of Normandy, which he has not visited yet. The name “Balbec,” in particular, summons up images in his mind which he knows are a simplified version of reality.

The narrator is still a boy at the end of Swann’s Way, but a long middle section, “Swann in Love,” deals with an adult love-affair that takes place before the narrator’s birth. (The narrator later develops a huge crush on Gilberte, the only daughter of Mr. and Mrs. Swann.)

In a very class-divided society, Swann is shown to be a social chameleon. He is quite at home with the narrator’s middle-class family, but he is also welcomed into the salons of the titled aristocracy. (Reading Proust, one would never guess that France had a revolution in the 1790s.)

In the home of the Verdurins, a husband and wife who pride themselves on creating their own social clique, Swann observes Odette de Crecy, who appeals to his esthetic taste, but not to his lust. She reminds him of a Biblical character in a painting by Botticelli, and he notes that she dresses fashionably, but he prefers to have affairs with fleshier beauties. He decides she is not his type, and he reminds himself of this from time to time.

Swann learns that Odette is a “courtesan” (as she is described in plot summaries of the novel), a woman who manages to seem respectable enough for bourgeois drawing rooms, but who lives alone and survives on the money given to her by various gentlemen who spend nights with her. She has to juggle her gentlemen callers, which is why she is not always at home when Swann happens to drive past in a carriage, and sometimes she has company. Odette is called “Madame” (not “mademoiselle”), so apparently she was married at one time.

Since this is Swann’s story, we are shown his complex feelings. At first, he regards Odette as a kind of living objet d’art, then he is tormented by a need to possess her, and to know where she is at all times, and with whom. They slide into an affair, and he gives her a few thousand francs from time to time, but he doesn’t want to believe he is simply paying for sexual service. To make things worse, the Verdurins stop inviting him to their soirees because Madame Verdurin thinks Swann is a social “poser.” (He is not the phony they think he is.) Since Odette still belongs to the Verdurins’ “little clan,” Swann is often left guessing about whether she is with them or with some other man that she met through them.

Through all this, Odette’s past and her consciousness are simply unknown. Since the Verdurins and their other guests would probably consider it vulgar for Odette to find a regular job (although one of her friends was “a little seamstress” before she retired), she has to cultivate the good will of men who can support her. Neither Swann nor the narrator seem to consider this an economic issue.

Swann’s sudden, unexplained marriage to Odette, after he has decided to give her up, is described as a tragedy. Many of the people who welcome Swann as a guest can’t accept Odette, even after she has become Madame Swann, so he often visits friends, including the narrator’s family, without his wife. After Odette gives birth to Gilberte, papa Swann continues to have an independent social life. Odette continues to dress fashionably on Swann’s income, and is often admired for this from afar.

I want to read Odette’s version of all this. I want to know what her childhood was like, and whether she was a widow when she met the Verdurins. I want to know whether being a “kept woman” (and her marriage doesn’t really change that) is the life she dreamt of when she was growing up.

I definitely want to know about the “two or three” lesbian relationships (or at least sexual encounters) Odette admits to when Swann questions her about them.

Even when I soldier in with the next six volumes in the series, I doubt whether I will get any sense of what the female characters think or feel. Quel dommage.
----------- 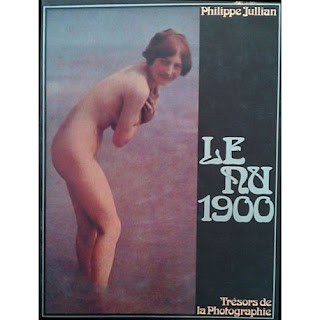 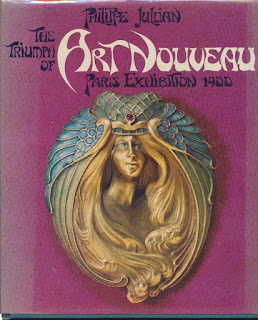 (Note: The artist Phillippe Jullian was Proust's contemporary, and he did the cover art for my 1970 --first published 1928 -- copy of Swann's Way, but I couldn't find the image on-line.)