This post is two days late, I know. On Friday, December 22, when this post was supposed to appear, I was frantically reading and marking student essays and exams to get them done before Christmas, AND making up two syllabi (complete schedules for new classes to be taught from January to April 2018). These were due December 20 at the latest, but I had NO TIME before Friday. On Saturday morning, I submitted my last set of grades to the department head, who probably won’t see them until the university re-opens on January 2, but at least I have them off my hands for the meanwhile.

I still have to make up a syllabus for my new Non-Fiction (or Advanced Composition) class, which I will teach for the first time in January. It’s part of the Creative Writing program. A new textbook is on its way. I assume I will be thinking hard about this class between December 26 and January 2. I can only do one thing at a time.

On Saturday, Spouse and I had lunch with Younger Stepson and his new girlfriend, partly so we could meet her. (This is our own version of Christmas lunch at the palace with Prince Harry and his fiancée, Meghan Markle.) Surprise! The new girlfriend is the older student who came to my office to discuss essay-writing and the new class, which she hoped would help her. She is registered in it, so I will be seeing her in class next semester after I see her this evening at the Christmas Eve family supper.

After lunch, Stepson proposed family hugs all around, and New Girlfriend felt understandably awkward to be hugging (or being hugged by) the instructor who will soon be evaluating her writing. We will just have to juggle the multiple roles as best we can.

This is all a prologue to my discussion of what I’ve been reading, aside from student essays.

Several weeks ago, I agreed to review a new novel by Nairne Holtz, a Canadian lesbian writer and librarian I’ve followed for years. Her new book, Femme Confidential, looks autobiographical. (One of the central characters, Liberty, was raised on the Canadian East Coast by expat American Quaker parents, like the author.) It’s all about coming out into the lesbian community of Toronto in the 1980s and continuing to live there to the current time. Many of the characters live in the neighbourhood of Parkdale, formerly rundown but now gentrified, much like Greenwich Village in NYC. (My daughter, her husband, and their kids lucked into a reasonably-priced house in Parkdale earlier in this century.) 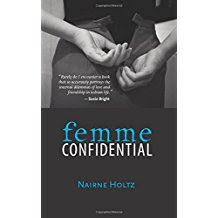 Of course, I wonder how much of the novel is based on the novelist’s life, and whether I am less than six degrees of separation from several of the people on whom the characters are based. (Since the early 1980s, a surprising—to me—number of lesbians have moved from Toronto to Regina, Saskatchewan, where I live, but none of them have stayed.)

As a reviewer, however, I have to say that the novel works as fiction, and the sex is seamlessly blended into character development. The book could be described as erotica which fits better with literary fiction than with one-handed reads.

The following scene contains a plot twist which is both logical and surprising. Liberty has been living with her “boyfriend,” David, on the rebound from Veronika, the woman she really wants, but who can’t seem to stay faithful. Liberty has told David she wants to break up. David tells her he wants to become a woman.

David asked, ‘Are you mad?’

I shook my head. Got up and sat on the couch beside him. Felt him cradle my hand. ‘Would you call me Dana?’

He already had a name picked out.

David—Dana. . I was going to have to start thinking of her as Dana, as she—wiped at one of her eyes. ‘I’m so glad you’re okay with this. I didn’t think you would be. That’s why I didn’t tell you.’

Tears formed in my eyes. ‘Yeah, but it’s sad we’re breaking up.’

Dana stared at me. ‘Being with me if I transition means being a lesbian.’

Right, okay, why hadn’t I thought of it that way? What she was saying was perfectly logical and didn’t matter—I didn’t want to be with him—her—anymore.

‘No.’ I didn’t try to explain. The truth I supposed was I hadn’t meant to get involved with him. I had wanted Veronika and consoled myself with David.

She pulled her hand away from mine and stood up. ‘Fuck.’

She turned from me, threw up her hands, stormed into what had been our bedroom, and closed the door.

I read the novel in a brief lull between student assignments, and my review is overdue.

I also picked up Sisters in the Life, a non-fiction anthology about African-American lesbian filmmakers to review for The Gay & Lesbian Review. (The editor regularly sends a list of titles and brief blurbs to the reviewers on his list, and we choose what we want.) This book was published by Duke University Press, which liked my review of an earlier book by film scholar Kara Keeling so much that they quoted three different excerpts from my review on their website. 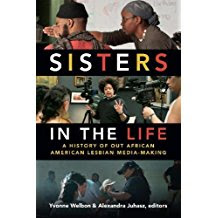 African-American lesbian filmmakers! Who knew they were a community with a body of work to their credit? The book includes photos, and I look forward to reading about films that I’m sure I will want to see, if there is a way to get them. (I know how to order books from bookstores and through Interlibrary Loans from the campus library, but film is a whole other medium.)

Last but not least, my contributor’s copy of The Sexy Librarian’s Dirty Thirty, Volume 2, arrived in the mail! I also have a story in Volume 1 of this series, but I don’t think that was ever printed. (It is available as an ebook and a podcast.) I will have to tear myself away from these stories to work on the stuff I need to write. 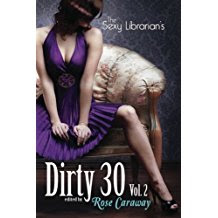 As usual, I have bitten off more than I can easily chew. I’m grateful that my mind still seems to be as sound as it ever was (ha), and I’m able to get from one place to another, even on dangerously icy ground. (A local journalist posted a pic of a slick-shiny street on Facebook to shame the city government which has not sent enough machines with graders and snow-melting salt to make the infrastructure navigable.)

Happy winter holidays to everyone here.