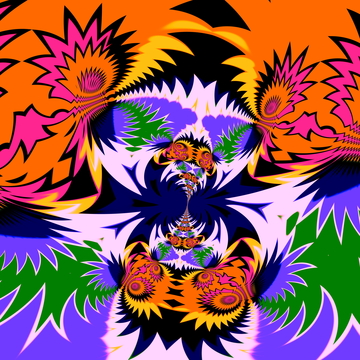 I have some acquaintance with madness.

In my late teens, I spent three months in a state psychiatric hospital, struggling with anorexia. Though I’d starved myself down to eighty five pounds while still perceiving myself as fat, I didn’t think I was crazy—which just goes to show how truly delusional I was—but my fellow patients sometimes acted that way. I became accustomed to people mumbling to themselves, shrieking in terror at invisible threats, or sitting for hours in one place, rocking back and forth. A few years after I was released, when I saw George Romero’s original “Night of the Living Dead”, I had nightmares for weeks. His mindless, shuffling zombies reminded me too much of my Thorazine-numbed fellow inmates.

Still, I’m in some sense attracted to insanity. In my early years, I devoured tales by Edgar Allen Poe and H.P. Lovecraft, two authors known for skirting the edge of madness. One of the books that influenced me most as a teen was Lilith by J.R. Salamanca, the story of a fascinating, creative young woman with acute schizophrenia who gradually draws an innocent hospital attendant into her world of glittering, terrible hallucinations. I fell in love with Lilith right along with Vincent. I couldn’t help myself. Indeed, madness and brilliance are closely linked in both fact and fiction. From Vincent Van Gogh to Sylvia Plath, we can all name crazy geniuses who produced great works of art despite—or perhaps due to—their disordered, tortured minds.

Do I seem mad to you? If so, they are responsible. They've driven me mad with their beauty and indifference.

They don't even bother to hunt anymore. They spend their days in their king-sized coffin, alabaster limbs entwined in a frozen tableau of passion. They devote their nights to surfing the Internet, listening to Bach or Dvořák, or lounging on their deck, the endless grid of the city sparkling below them.

Except, of course, for the nights when they feed.

Occasionally, on rainy days when there's no risk, I muster the courage to lift the polished rosewood lid of their communal casket and peek inside. I'm always startled by the scent that rises from their inert forms, orange blossoms and sun-warmed stone, no hint of dankness or decay. Their exquisite pallor complements the perfection of their naked bodies. They seem like statues modeled from translucent, milky glass.

He slumbers with one palm cupping her pert breast, the other arm wrapped around her waist. Her honey-brown hair fans over his chest, fine as spider silk. She curls her fist around his cock, which is rampant even as they sleep. The bold gesture contrasts with her innocent features. She has the smooth cheeks, pointed chin and plump lips of a teenage cheerleader.

My fingers twitch. The urge to trace the shape of that sweet, ripe mouth is almost irresistible. More times than I can count, I've seen those lips distorted by a fiendish grin and those girlish cheeks smeared with gore. It doesn't matter. She will always be my angel, my inspiration, my heart's desire, my doom. My beloved mistress.

My master is equally magnificent in his own way, with a dancer's subtly muscled arms and legs and a head of glorious ebony curls like some pale gypsy. He has a bookish look, with a high forehead rising above bushy black brows and a sensitive mouth that cries out for kisses.

I've never dared to lean close and take advantage of his immobility, much as I ache to feel the chill of his flesh against my own. If I gave way to temptation, would he know? I'm not certain that their death-like daytime sleep stills their minds the way it freezes their bodies. I doubt he'd punish me, if he discovered my transgression. He knows I'd welcome the mark of his bullwhip or the icy invasion of his knife. No, more likely he'd mock me, or simply ignore me, refusing to acknowledge my existence. I couldn't bear that.

The sight of them, locked together in eternal stasis, holds me captive. Blood pours into my cock, blood I know they'd savor if they'd only take it, until I'm hard as the concrete walls of the basement room where they sleep. My pulse pounds in my temples as my futile erection strains my trousers. I am their creature, their slave, stunned into helpless worship by their unearthly beauty.

I know they need me. That should satisfy me—the knowledge that without me they'd might fry or starve or succumb to some overly zealous reader of horror fiction. Month after month, year after year, I guard them and I procure them their victims. It's my privilege to serve them. That should be enough. But I want more from them, God help me, more than I can ever hope they'll give.

Renfield’s desire is so powerful that he offers himself to a sadist’s blade in order to trick his master and mistress into drinking his blood. Set against his awful need, death means nothing.

So maybe it’s not totally sane. I’ve always been fascinated by madness.

As for safe, where’s the thrill in safety?

You can’t, however, deny that it’s consensual.

Ducking into a blank alley, one of thousands in this city, I make my way to the metal door near the end. The keypad gives off a faint green luminescence. I tap in the combination and the door swings open; my pulse is already climbing. My boot heels ring hollow as I descend the industrial steel steps, and the thump of the bass rises to meet me. Excitement wells up, flooding my cunt, even before I’ve buzzed the final door and been admitted to this most particular and perverse playground.

The techno soundtrack punches me in the solar plexus. My heart stutters like I've been shocked by a defibrillator. Delicious weakness sweeps over me, a premonition of what’s to come.

Some of those who frequent Underground are actual vampires, or so I’ve heard. I believe it. Others just like to play with knives.

My nameless protagonist in “Fire” (in Rule 34: Weird and Wonderful Fetish Erotica) becomes an arsonist to satisfy his fire fetish, and almost ends up committing murder. He doesn’t think he’s crazy. After all, he plans his fiery escapades down to the smallest detail.

I’ve written a few characters who were literally insane. In Necessary Madness, my hero Kyle has uncontrolled prescient visions which have driven him into psychosis. Meanwhile, my unpublished lesbian story “Countertransference” features an exquisite teen-aged schizophrenic who tantalizes her therapist with her grace and creativity. There are echoes of Lilith in this tale, but the truly crazy character is Doctor Gardner, so obsessed with her patient Alisha that she risks everything to consummate her lust.

At one point, I planned to write a novel called Asylum, set in a psychiatric institution. I’ve dropped that idea for now, partly because I realized how similar my notions were to Lilith. The theme, however, continues to fascinate me—the fuzzy edge between sanity and insanity. What’s real? What’s a delusion? What is more important, passion or safety? Ecstasy or order?

I do think I’m pretty sane these days, but when I write some of these stories, I start to wonder. What am I missing?